Yes, Irish Soda Bread is actually a controversial topic. What is true Irish Soda Bread, and what is not? Soda bread, a traditional product of Ireland (St. Patrick’s Day, anyone?) has a similar history in its most basic concept to my Grandmother Bread. It was developed to suit a setting in which its bakers were poor and/or managing under limited access to ingredients. The ingredients for Grandmother Bread are foundational–flour, yeast, sugar, salt, water. Nothing more is needed to create a loaf of bread–you could even do without the sugar if you really had to. But can you add eggs, oil, fruits, nuts, and all kinds of other things? Of course you can! If you’re not living up a holler and can get to the store, go for it. (I have lots of recipes to do just that right here.)

Now what about Irish Soda Bread? It was also created by people who were poor and/or had limited access to ingredients. Baking soda (bicarbonate of soda) came to Ireland in the 1840s, though it’s been known to man a lot longer. A similar form of soda was used by the Egyptians to make mummies. (And we want to bake with it?!) It was not until the 1840s that a British chemist developed bicarbonate of soda as an alternative to yeast, and Irish Soda Bread wasn’t far behind. It was traditionally baked with the simplest of ingredients–flour, baking soda, sour milk (to activate the soda), and salt.

Why sour milk? (Slight sidetrip.) Sour milk is acidic, and acid is required to release the raising power of the soda. Buttermilk used in soda bread is a modern spin–in ye olde Ireland there was plenty of sour (old) milk from the family cow to go around.

Soda bread was popularized in Ireland due to its basic ingredients, with its rustic round shape defined by the open hearths in their homes that required baking on flat griddles or in iron pots. The cross cut into the top was to ward off the devil. (Don’t let the devil in your kitchen!) The resulting bread was tender inside, contrasting to a hard outer crust, along with a sour flavor and dense texture.

And there’s nothing wrong with that! If you’re a purist, this is what you’re after, four simple ingredients–flour, baking soda, sour milk, and salt. This recipe structure is going to be a bit rough on shelf life, however, so be sure to eat it right away, before it turns into a brick.

However, as with Grandmother Bread, if you’re not living up a holler with a pony as your only transportation, or say, you’re not living in a cottage in 1800s Ireland, and you’re not completely knackered by all this historical detail at this point, I’ve got my updated Irish Soda Bread to share, just in time for St. Patrick’s Day. And if you’re a purist, you’d better leg it because it’s not pure. But it’s traditional just the same, quite delicious, and has a shelf life longer than five minutes.

Additional ingredients to the core recipe include baking powder (extra rise), a small amount of butter (slight richness), egg (again, richness, and fluffier texture), and a bit of sugar (contributes to tenderness and shelf life). As with anything else, even in ye olde Ireland, those not living in an isolated cottage with limited resources would have done the same, even in the 1800s. In case you haven’t noticed by now, soda bread is quite similar to a biscuit–not our Southern biscuits–British biscuits, aka scones, which makes these additional ingredients quite organic to the place and time of this recipe’s birth. (We’re ignoring for the moment that the British don’t even call biscuits biscuits in order to avoid confusion. Biscuit, in British terms, is what we call a cracker. But now I’m confusing the point, so let’s ignore that again.)

How to make Irish Soda Bread:

Preheat oven to 375-degrees. Combine dry ingredients in a medium size bowl. Cut in butter until mixture resembles coarse crumbs. Combine egg and buttermilk or sour milk; whisk and add to the flour mixture along with currants (or raisins, if using). Stir just until moistened. Turn out on to a floured surface and knead gently several times before shaping into a round disc-type shape. Place on a greased baking sheet and, using a sharp knife, cut a cross into the top. Whisk the second egg in a small bowl and brush the top of the bread for deeper, richer color. Bake in a 375-degree oven for 25 minutes. 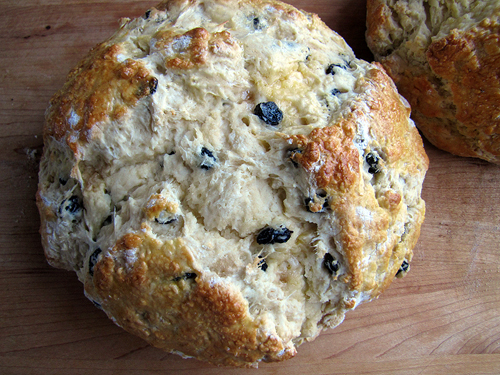 And there you have it, Irish Soda Bread, in all its traditional glory albeit updated–and quite tasty! Now you’re all ready for St. Patrick’s Day! Or any day, because this is a delicious quick bread any time you’re in a pinch and don’t have much time to put something amazing on the table. And yeah, this simple bread is surprisingly amazing. The Irish, they’re the full shilling, eh?