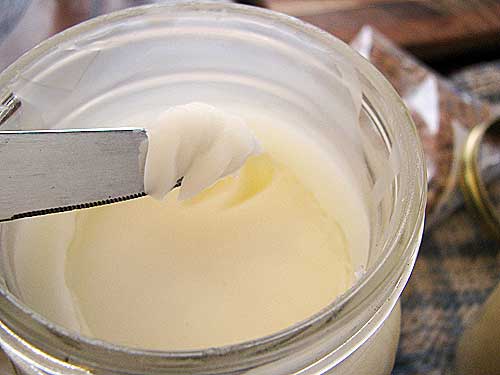 First, go downstairs to the freezer and get out a big bag of fat. If you don’t have a big bag of fat, you’ll have to go to a butcher shop. Trust me, it’s worth it. Making your own lard is easy! It’s fresh, natural, and not hydrogenated like store-bought lard, and if you grew your own pig, you know exactly what it was fed. I hear tell it makes the best pie crusts in the world and I can hardly wait to make some. I made my first homemade lard this week and was instantly hooked. No more lard from the store for me.

Lard has a bad rap, but don’t let the Crisco people fool you. You should see what’s in shortening! Lard, home-rendered, is actually good for you. Generations before us thrived on traditional fats, which are much healthier for you than man-made. Lard is a real, natural food–don’t be afraid of it!

Printer-Friendly
How to Make Your Own Lard:

To render lard for baking, the best pork fat is kidney, back, or belly fat. Freeze the fat first to make it easier to handle–cutting up the fat is a messy job. Chop it into about 1-inch pieces. (Some people even grind the frozen fat. The smaller the pieces of fat you start with, the quicker it will render.) How much fat you render at once doesn’t matter–however much you want to work with at a time. 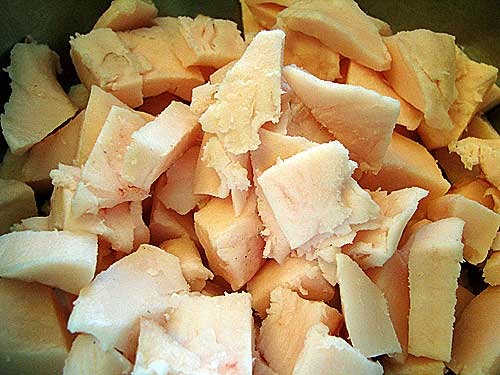 Use a large cast iron kettle or dutch oven to cook it on the stovetop or cook it in a crock pot or the oven. Cook the fat any way you choose–the method is similar no matter which way you do it. I used a crock pot, and for my first batch, used a small quantity of fat, enough that about filled up my small 3 1/2-quart crock pot. This rendered down to a quart of regular, creamy-white baking lard plus a half-pint of what is called savory lard and the cracklins. (You actually get three products out of one job! The mild baking lard, the savory lard, and the guilty pleasure of the cracklins.)

First add water to cover the bottom of the pot or pan you’re using to cook the lard then add a layer of fat pieces. The water will eventually cook out–it’s just there at the start while you get the first pieces of fat melting so the fat doesn’t stick to the bottom. 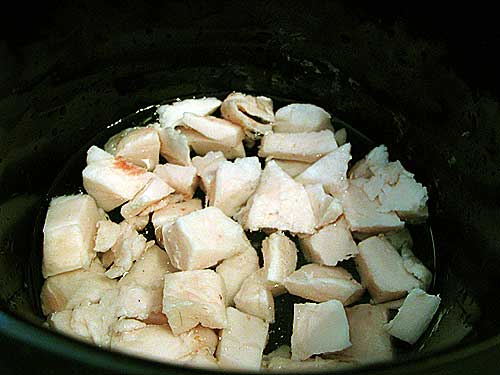 Cook the lard slowly. I set my crock pot on low and kept the pot uncovered throughout the process. When you see the first pieces of fat floating and turning white, the rendering has begun. 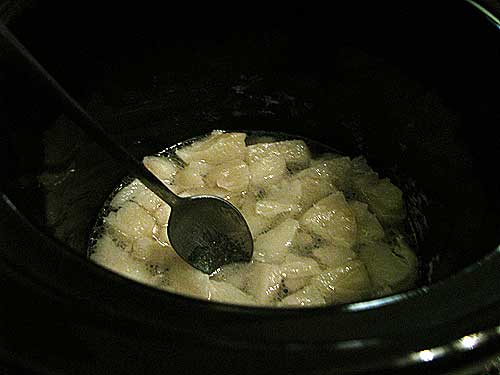 Go ahead and put in the rest of the fat. 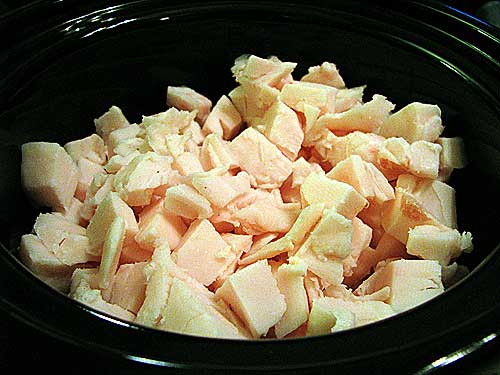 You can stir it occasionally, but it doesn’t need a whole lot of attention. It knows what it’s doing. It doesn’t need your help. The pieces will float as the amount of melted fat increases. 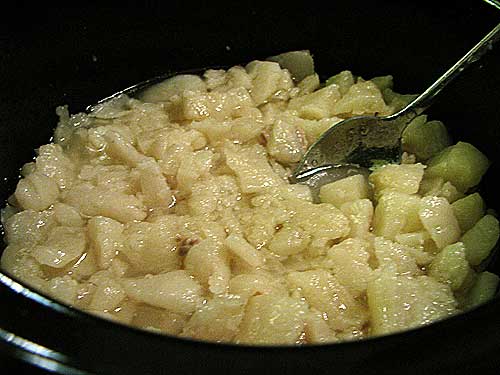 Eventually, the pieces of fat will sink to the bottom–those are your cracklins-to-be. Stick a spoon in there and you’ll see your nice, clear liquid fat. The cracklins will still have a puffy fatness to them. (Not crispy yet.) 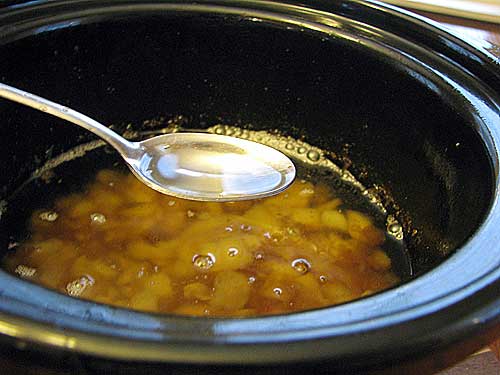 You want to render your good, mild baking lard before you finish the cracklins. When you see the pieces sinking, it’s time to get the good stuff. In my crock pot on low, this took about 12 hours.

Line a colander with cheesecloth. 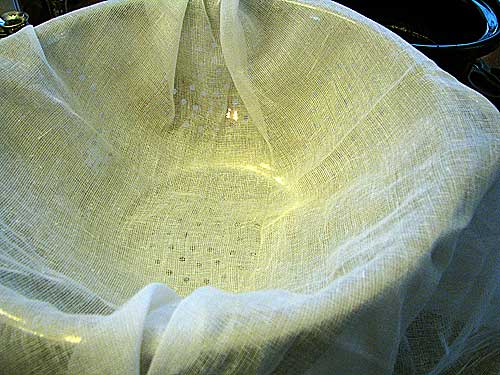 Strain the lard into the colander. I used a bowl underneath to catch it that has a pour spout, the easier to then pour my lard into a canning jar for storage. 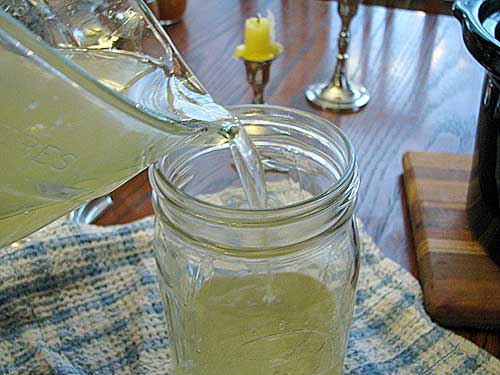 Be careful, pour slowly–you’ll make a mess if you pour it out too quickly. This first rendering of clarified lard is perfect for pie crusts and other baking uses (and also for soapmaking). It will be mild and turn a gorgeous white once it sets. Chill it quickly for best texture. I put mine in the freezer for about an hour then once it started to set, transferred it to the fridge.

Here are the cracklins, left after the straining. See how you can still see a lot of puffy fat to them. 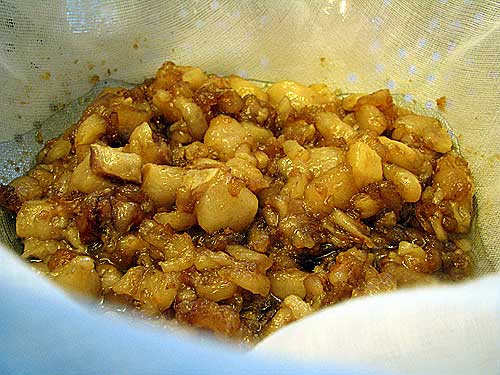 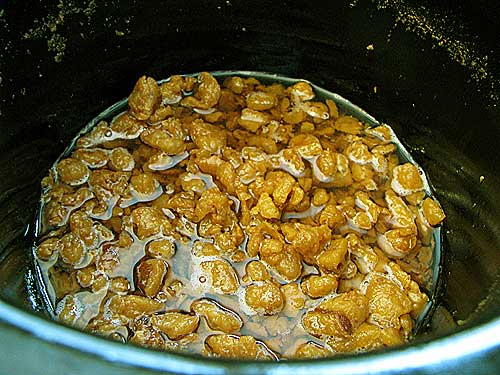 Cracklins are delicious sprinkled over salads or on top of casseroles. (Think Durkee fried onions and green bean casserole. Anything where you’d use fried onions, you could use cracklins.) 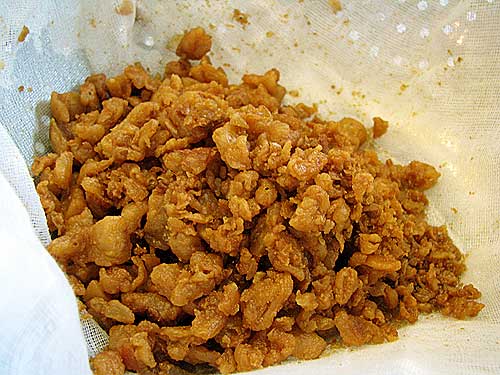 Again, I strained the lard into a cheesecloth-lined colander, clarifying this second rendering, then set aside the cracklins to cool. After the cracklins were cool, I put them in a labelled storage baggie and stuck them in the freezer for next time I’m making a casserole. I poured the strained second rendering into a half-pint jar. This is what is referred to as “savory” lard. Because it was made from cooking down the cracklins, it has a much stronger flavor. You can use it for various savory cooking purposes–it’s just probably not something you’d want for apple pie. It will set to a light amber color. 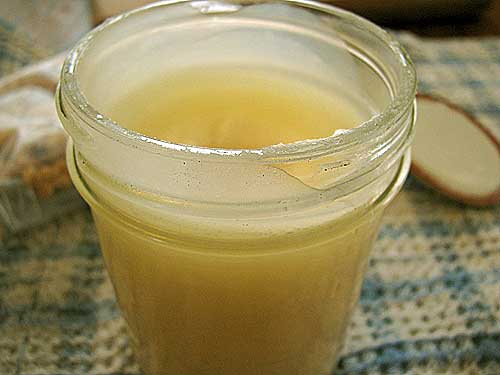 To store your home-rendered lard, choose whatever method you prefer. You can keep it in the fridge (or freezer, if you’ve made a large quantity at once). You can store it right on the pantry shelf–many people say they do that. You can even can it. I’m keeping mine in the fridge.

Beautiful, creamy homemade lard. The mild first rendering is a wonder to behold. I see biscuits. 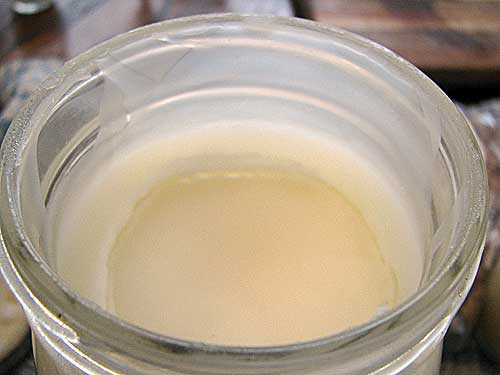 Making your own lard is incredibly easy and takes you another step closer to your food and its origins (and even more natural homemade soap). Any recipe that calls for shortening–pie crust, cookies, biscuits, frying french fries, and so on–can be made with lard instead of shortening. The rendering process does take a good amount of time, so be sure to take that into account in making your plans. Now that I’ve familiarized myself with the process, next time I’ll cut the fat up the night before, stick it in the fridge to keep, then start it in the crock pot first thing in the morning. I think I’ll try it in my cast iron kettle next time, too. (Think of the seasoning that’ll be for my cast iron!) How long it takes for you will vary depending on the amount of fat and the starting size of your fat pieces. Remember, however, that the rendering needs little tending while it’s taking place. I made the mistake of starting mine in the evening and I actually turned it off when I went to bed then got up in the middle of the night and turned it back on. The first rendering was ready when I got up in the morning. I was sleeping during several hours of the cook-time after I turned it back on. (The 12 hours for my cook time is the total minus the time I had the pot turned off.)

I’ve got plenty more fat in the freezer and I’ll be making my own lard from now on. 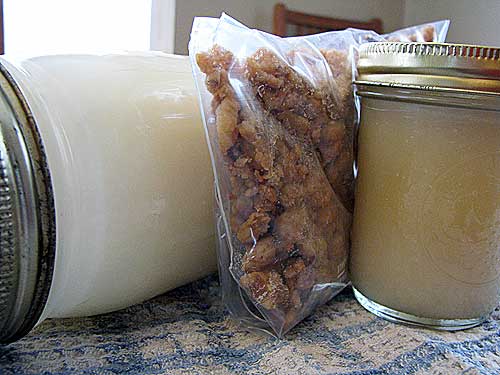 I want to thank Cathy, who inspired me with her lard-making experience. You can read a whole discussion on the Chickens in the Road forum here about making lard. The discussion also includes links to other resources on methods of rendering and also on canning lard. You can render fat from any animal, by the way. It’s an amazingly simple process that is old-fashioned, natural, and traditional–and as good today as it was for the generations that came before us.