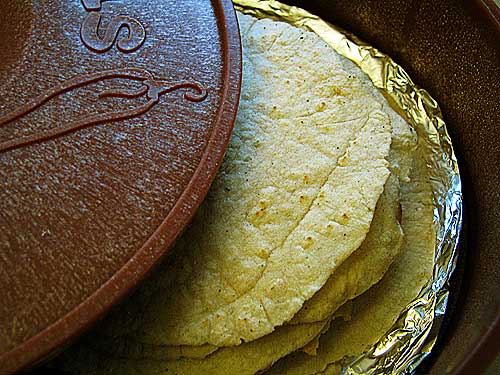 I’ve been hooked on fresh tortillas ever since I started making my own flour tortillas, so learning how to fix corn tortillas was a natural next step. This post is not so much a recipe–because there’s nothing to it, just some masa harina, salt, and water–as an experience. An adventure, if you will!

First, you need to make the masa. 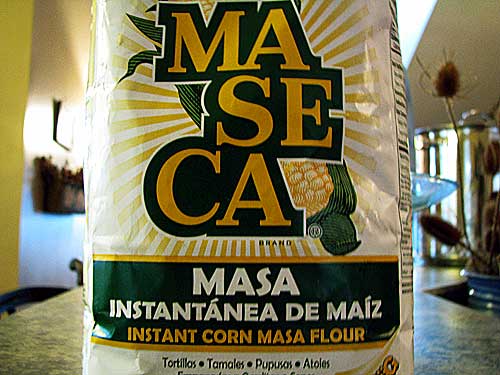 Masa harina is the flour that’s used to make masa, which is the term for the dough. Masa harina is corn flour. Cornmeal is much rougher in texture and not the same thing. Corn flour for masa is made by soaking corn kernels in caustic limewater to release the outer skin. The remaining flour is then dried and ground. “Instant masa” or masa harina sounds like a baking mix, but it’s not. 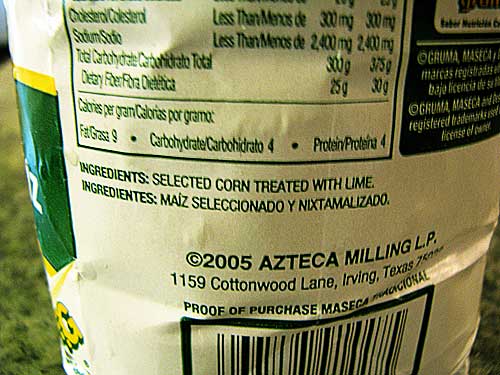 It’s just corn flour that’s been given this lime treatment before grinding and is ready for masa-making. I used the simple directions straight off the package. 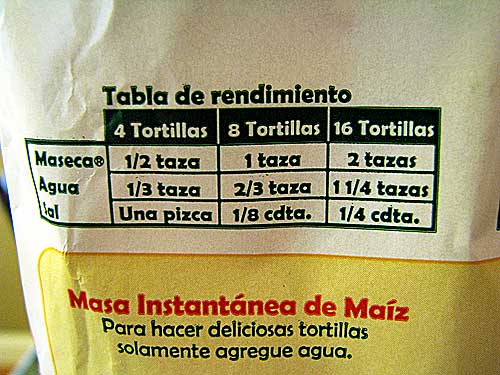 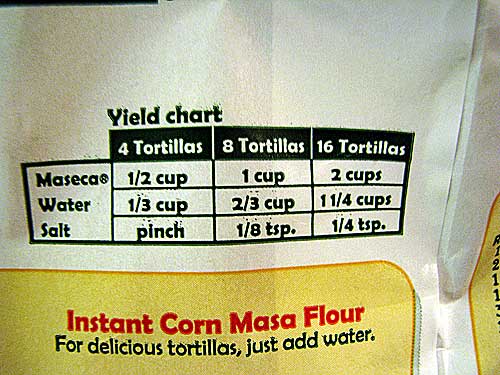 The directions come in Spanish and English. The only Spanish I know is food-related, like tortilla, enchilada, and burrito. I took French in school. It comes in real handy. All the time. There are so many French people around here! Mais oui!

Okay, back to masa. Put 2 cups of the corn flour in a bowl. The directions specify a “loose measure” so don’t pack it down. Add 1/4 teaspoon salt. (I figure you can probably leave this out, or use less, if you prefer. One of the best things about making things from scratch is that you can control the process and you know exactly what is going into your food.) 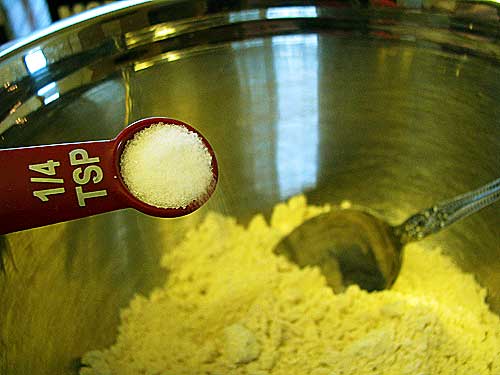 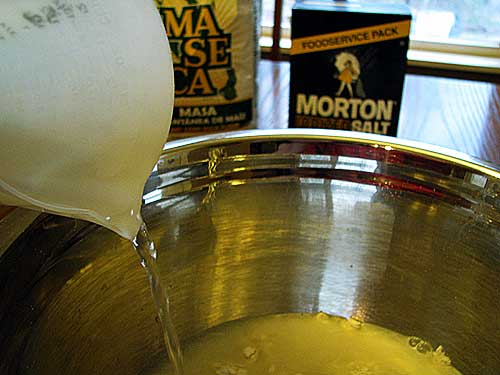 Mix thoroughly to make a soft dough. If the dough is too dry, you can add more water. The package directions suggest adding more water a tablespoon at a time. My dough was too dry after the initial 1 1/4 cups of water. 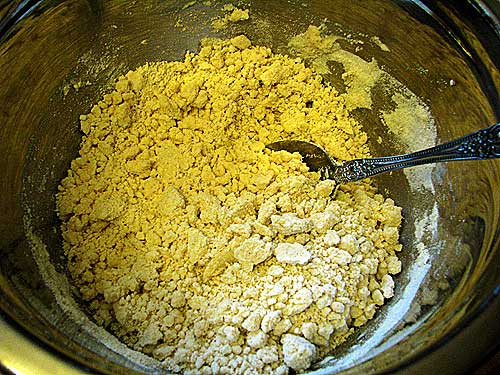 I added several more tablespoons of water until I could reach into the dough with my hands and ball up a piece that would stick together and not crumble back apart. 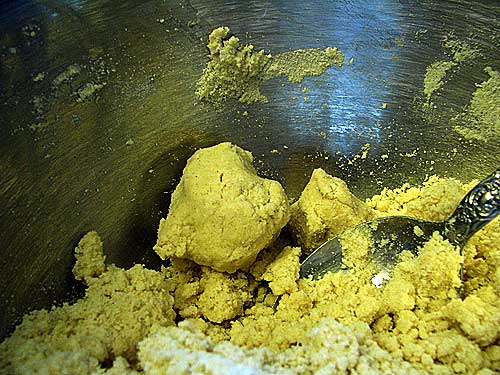 I worked the dough into two equal balls. 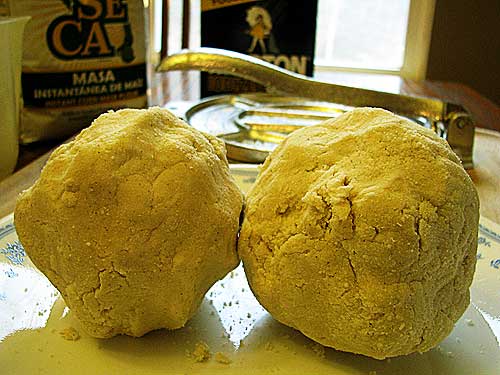 According to the package, this should make 16 tortillas, so I divided the two balls into halves then wedges until I had 16 fairly equal pieces. These photographs are from my first time making corn tortillas. After I worked with the dough in subsequent batches, I had a better feel for it. I think these were still a little too dry, though they worked out okay. 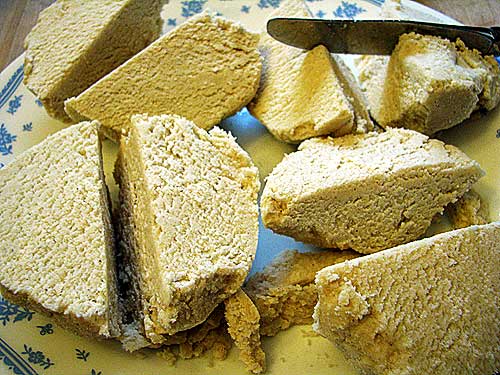 Shape each piece into a ball. 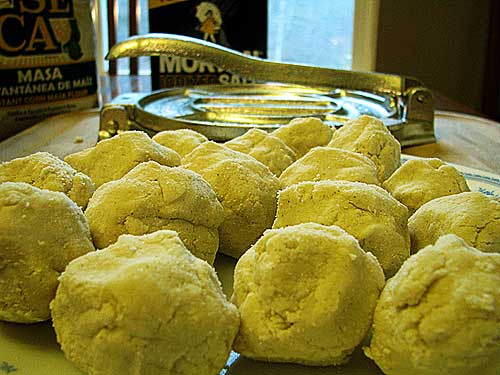 If there is a rooster watching you from outside your dining room door, do not give in to the urge to give him a corn tortilla. He has his own food. This is yours. 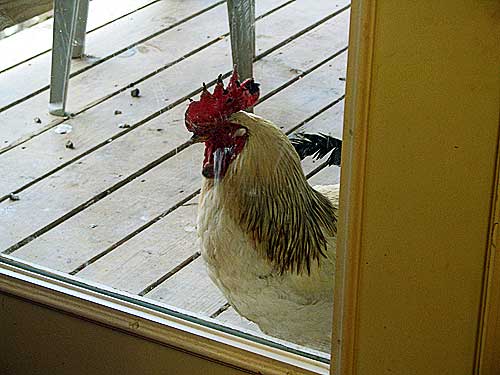 Cover the balls of dough with a damp cloth to keep them from drying out while you’re cooking. Time for the tortilla press! A tortilla press is a simple device that smashes each little ball into a nice, tidy circle. 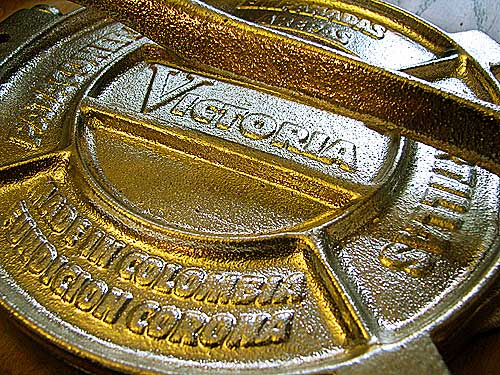 At this point, you want to set up your tortilla-making operation beside your cooktop. Place a cast iron skillet on high heat. (Cast iron works best–you need something that can take high heat with no oil.) Open the tortilla press and lay a piece of plastic wrap across the bottom of it. Place a ball of masa toward the hinged end. (Not in the middle! I found that placing it toward the hinge created much nicer, rounder tortillas.) 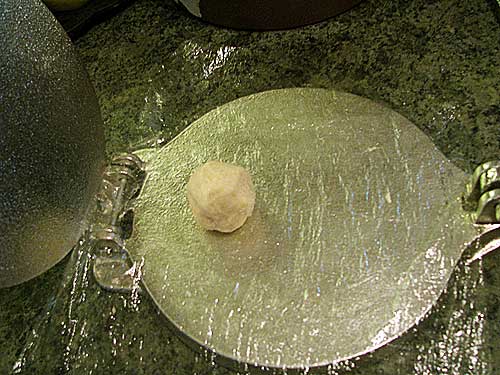 Place another piece of plastic on top and close the press, pushing down on it to flatten the ball. Look at that! Why, it’s a tortilla! Peel off the plastic carefully. 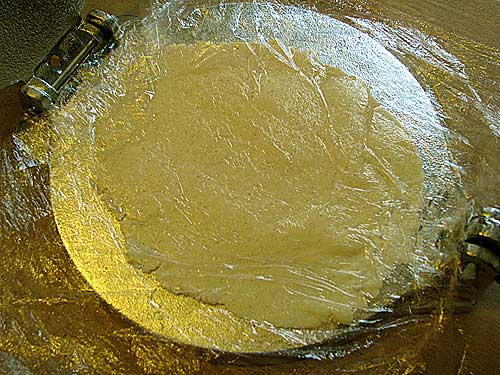 Fry each side about one minute on high heat. I do the first side another 20-30 seconds after the second side. Keep the operation moving–as you’re frying one tortilla, press another. Move each tortilla as it’s finished onto a plate or into a tortilla keeper and cover. 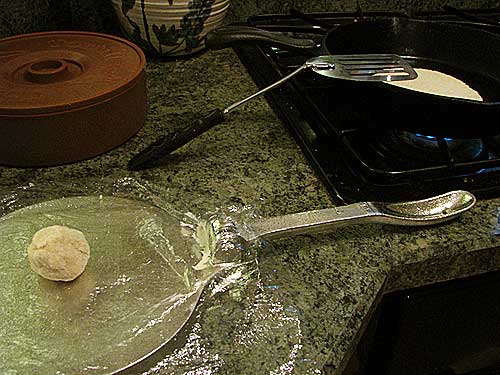 I ended up with a nice little pile of homemade corn tortillas! And they were mostly round. Perfection is not important! 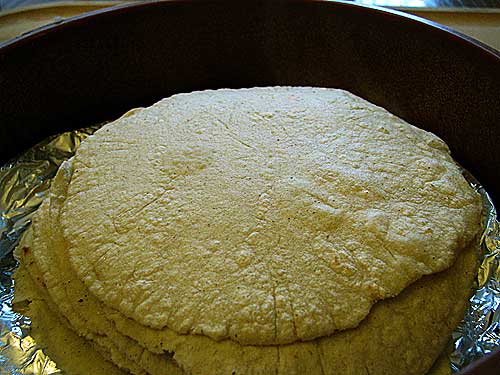 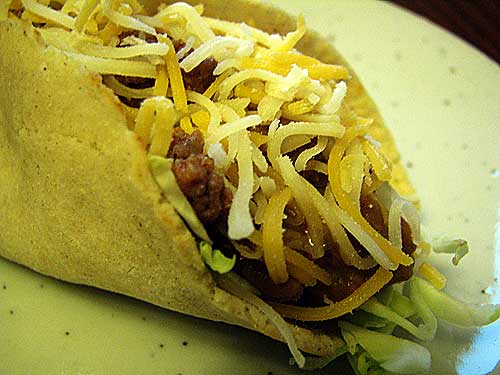 They were a little on the small side, though, and I was ridiculed by children who asked me if I was serving them “appetizer” tortillas.

I told them this was a tortilla adventure and size didn’t matter. They seemed to think it was dinner and they wanted bigger tortillas. And then they made fun of me some more.

1. Children are so annoying!

2. Add water until the dough is not crumbly at all. The “loose measure” of the corn flour is a little bit tricky, so rather than worrying so much about how much flour and how much water, focus on getting a feel for the dough. I had to try this a couple times before I got it right–you might have to do that, too. If you add too much water, you’ll have trouble with your tortillas sticking, so always add water in small increments then get your hands in there to see how the dough feels. (You can always add more flour if you go way too far with the water.) Don’t worry about the ones that don’t work out. Fry the crumbled pieces in some oil, sprinkle on some salt, and call them homemade tortilla chips. The best way I can describe the right feeling to the dough for me is the consistency of pastry–without the feel of shortening/lard in the dough, of course.

3. Cut apart a plastic storage baggie and use that for the two pieces of plastic rather than the flimsier plastic wrap when pressing the tortillas. 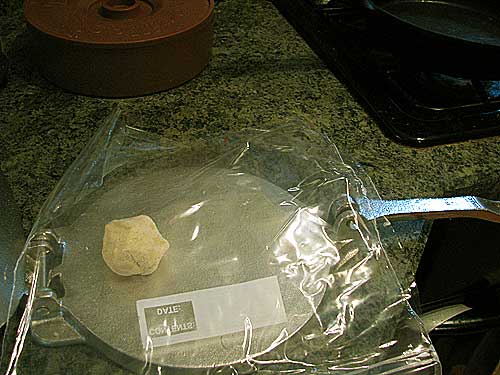 It’s MUCH easier to handle and releases the tortillas better. 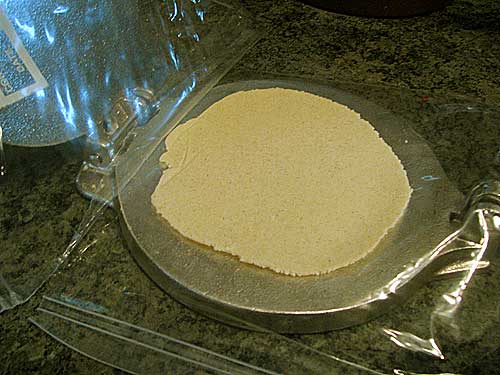 You can save and re-use the plastic, so no wasting. Just wipe off the plastic, fold the two sheets up and tuck them into a sandwich-size zipper baggie to store.

4. Don’t divide the dough into 16 balls. Divide it into 12. If you don’t do this, you will have children laughing at you.

5. You can roll these by hand. It’s a lot more trouble, but if you don’t want to buy a tortilla press, it will work in a pinch, or you can always make a homemade press. (Tortilla presses aren’t expensive–put in “tortilla press” in a search engine to find places to buy them online.) You can also use a tortilla press for flour tortillas, though you are limited by the size of the press. I usually make my flour tortillas larger than would work with my press.

I love making my own tortillas, both flour and corn. I wouldn’t go back to store-bought tortillas for anything! Tortillas aren’t hard to make, and you can even make the dough in advance and freeze it to thaw and cook anytime. The instant masa is handy if you love Mexican food–look around to find a store in your area that carries it. (I believe you can also order it online if necessary.) You can use it to make tamales, empandadas, tostadas, your own tortilla chips, taco shells, sopes, etc. I’ll be having lots of fun now! I love Mexican food. Be prepared to experiment a bit at first and get a feel for the dough–that’s just part of the adventure.

Here are some of my bigger corn tortillas, from dividing the dough into 12 balls instead of 16. I also had a better feel for the consistency of the dough by the time I made this batch. 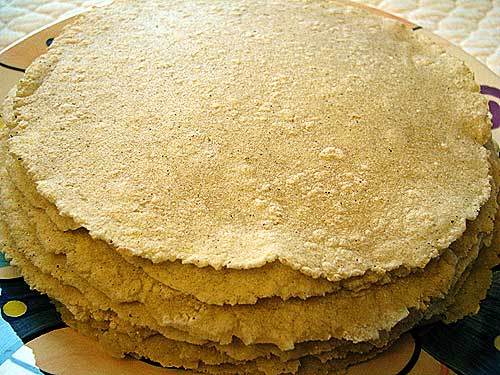 If you like corn tortillas, you’ll love making your own–just play around with the dough until you get a good feel for what’s right. You know that’s how the little old ladies in Mexican villages do it. They aren’t measuring. They’ve learned the right feel for the dough. 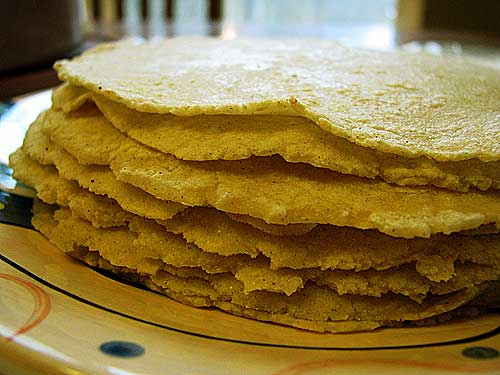 And if you don’t like corn tortillas, you’ve never had ’em homemade. 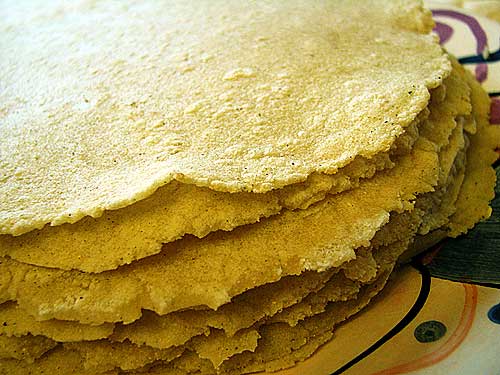 Try one right off the skillet with melted butter! You know you want to.