Back in my college days at Texas Tech (Lubbock, Texas), I became a vegetarian. For awhile, I was even the president of a student organization called the Animal Rights Coalition. Really! In fact, I was a founding member and helped create the organization. Our claim to fame was stopping an annual fur coat giveaway that had been offered for years by a local TV station. If I remember correctly, it was a “first freeze” contest where people picked the first date it would freeze and then a winner was drawn from the people who chose the correct date. We did an anti-fur march in front of the TV station and got a lot of local press. (The other TV stations were happy to cover it, ha.) The next year, the TV station offered a beach trip instead of a fur coat.

I remained a vegetarian for a number of years afterward, until I came to my senses. Just kidding! But I am, obviously, quite the meat eater today, and even tried hunting this past season, and I raise and butcher my own animals, so I’m the farthest thing from a vegetarian anymore. Though I do think that my attitude toward livestock is still impacted by my perspective gained during my college years and the reading I did about how animals are treated in mass operations. I prefer raising my own meat where I can, and knowing it was raised on green pastures, treated with care and respect, and enjoyed a good life right up until the last moment. In many cases, I still buy meat from the store, too, though I wish I didn’t have to. Just sayin’. I’m not judging buying meat from the store. Raise-your-own is not possible for everyone. (If you don’t know a farmer, you can still support a local small farmer by attending livestock auctions and buying farm-raised livestock that can be directly sent to the processor from the auction house, by the way! But that’s another topic.)

By now you’re wondering what any of this has to do with fried chicken. But wait! There’s more! All three of my children started their lives as vegetarians. I had some plastic play food for them and Ross used to call the burger patty a cookie. Because he didn’t recognize a burger patty. And he’d certainly never had a Happy Meal. Then he went to kindergarten. And was of an age where I started allowing him to spend the night at friends’ houses. One day I picked him up after a sleepover and he told me about the fabulous dinner his friend’s mother had cooked the night before. It was called fried chicken! Oh, my, it was the most magnificent thing he’d ever tasted, and he went on and on about it.

I was horrified. Not because he’d been eating meat–but because he was so enchanted with ANOTHER MOTHER’S COOKING! I couldn’t stand it! I went straight to the grocery store and bought some chicken.

For a few months following that incident, I would fry chicken about once a week, as a treat. And I wouldn’t eat it, of course. I just needed to show Ross that I could fry chicken, too! I was not going to be beaten by that other mother! (Not competitive or anything, am I.)

Frying chicken is a slippery slope if you’re a vegetarian. Fried chicken looks good, and it smells delicious! One day I had to eat a piece myself. And the rest is history. A few years ago, I even helped butcher some of my own chickens and swung the ax to cut off a chicken head.

The kids don’t even remember being vegetarians when they were little. Whenever I bring up this story, Ross (who is quite the carnivore and hunter) is proud of himself for turning me back into a meat eater. Weston is a vegetarian today–he became a vegetarian a few years ago, influenced by his vegan girlfriend. They’re no longer dating, but he’s still a vegetarian. Maybe one day he’ll start dating a cute little meat eater and…. We’ll see. People do all sorts of strange things in college, as I know!

When I posted this photo the other day, I had requests to write about how I make my fried chicken. 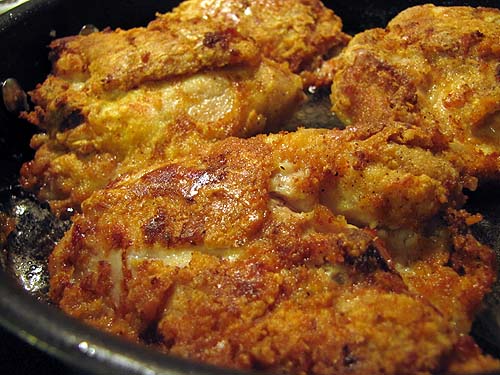 So here we go.

Step One: Soaking. Southern-fried chicken is traditionally soaked, usually in buttermilk, for at least a few hours or (preferably) overnight. It can also be soaked with yogurt added in, or plain milk. Lactic acid (supposedly) breaks down the chicken and tenderizes it. Buttermilk (or yogurt) is often used for the extra tang to the flavor. If you don’t have buttermilk, milk will also do just fine.

Most chicken you can get from the store is going to be tender anyway, but the pieces need a soaking before being dredged in the coating mixture, so it can’t hurt.

The chicken can be soaked in the buttermilk or milk alone, but I always add eggs. How much milk and how many eggs depends on how much chicken I’m frying. (I read a comment yesterday that the ratio was one egg to 1/2 cup milk, so you can take that ratio, or just do what you feel like doing, which is what I do.)

For the quantities I’m listing here, I was frying four thigh pieces. If you’re frying a whole chicken, you’d probably double that.

I start with 1/2 cup of milk and beat in two eggs. Pour the egg/milk mixture into a baggie that seals. Add the chicken pieces.

At that point, I pour more milk directly into the baggie with the chicken, enough to cover the pieces when the baggie is sealed and placed on its side. For four thigh pieces, that’s approximately another cup to cup and a half of milk. 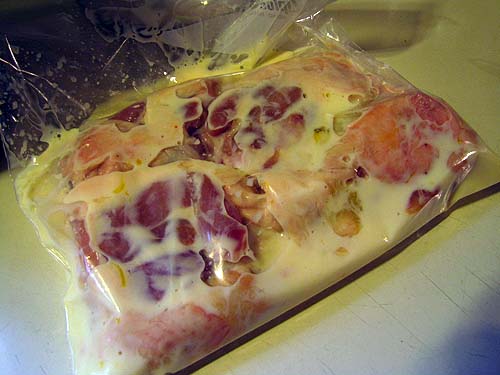 Refrigerate to soak for at least two hours, up to overnight. Randomly, when I think of it, I’ll stop by the fridge and turn the baggie.

Step Two: Coating. I like to coat chicken in a mixture of flour combined with some other ingredient that adds texture. Most often, this means crushed crackers (such as Ritz). Sometimes I’ll use crushed potato chips or Panko crumbs or roughly ground oatmeal or even cornmeal. Again, for this example, I was only frying four thigh pieces, so adjust the quantities to suit however much chicken you’re frying.

When using crackers, I’ll use about half a sleeve of crackers, crushed. I put that in a bread baggie. (The kind that doesn’t have a seal, they’re cheaper, and for this purpose, I don’t need the seal.) 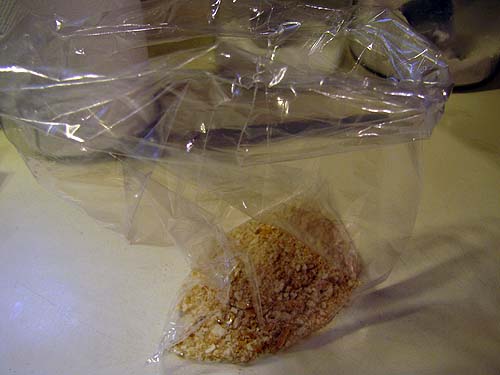 It’s probably something less than a cup of crushed crackers, but I don’t really measure. To this, I’ll add about a cup and a half to two cups of flour.

From that point, you can do anything, depending on your mood! Sometimes I want hot and spicy chicken–I’ll add crushed red peppers and ground cayenne. Maybe I want garlic-herb chicken–I’ll put in garlic with some mixture of herbs. Or sometimes I want a sweet fried chicken and I’ll use a couple of tablespoons of brown sugar. (I love sweet and salty!) I’ll also add salt and pepper to any mixture, though if I’m doing a sweet fried chicken, I’ll usually leave out the pepper. The seasonings, and amounts of the seasonings, are up to personal taste and is something that calls for experimentation until you find the combination that suits you.

Once I have my coating mixture ready, I put the chicken, one piece at a time, in the baggie and shake it up to coat well, and add to my skillet. There’s actually a piece of chicken in this baggie–you can’t even see it. 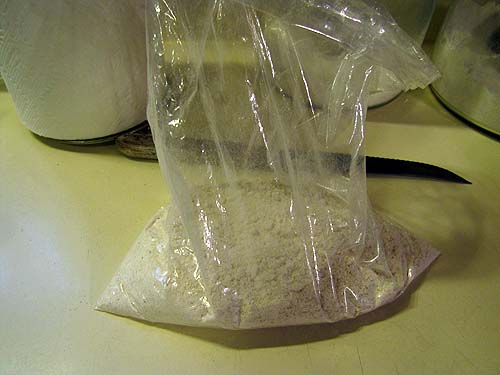 Step Three: Frying. I don’t use a deep fryer for chicken. I use a skillet with probably less than an inch of oil in it. Enough to cover the bottom of the pan and come up a little bit. 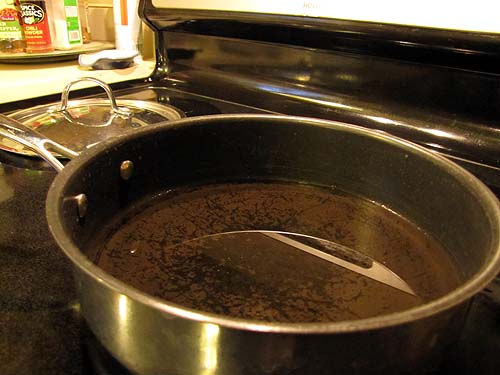 The best oil to fry in can be a subject of debate, though I’ve heard peanut oil is best. I just use regular vegetable oil because I always have it. I prefer to use a non-stick skillet for frying chicken because I don’t want to chance the pieces sticking and tearing off my coating.

Before preparing the coating mixture, I put the oil in the skillet and turn the heat on medium-low so the skillet is ready when I’ve got pieces coming out of the baggie coated. From there, it’s just like frying anything–fry on one side, flip and fry on the other. Chicken usually takes 45 minutes to an hour to cook through, and I don’t want to put the lid on the skillet because that will interfere with crispiness so I keep the heat on medium-low throughout the frying process to give the chicken time to cook without over-frying the coating. Larger pieces, like breasts, will take longer than smaller pieces. Remove smaller pieces as needed, and be sure to give breast pieces the full hour. 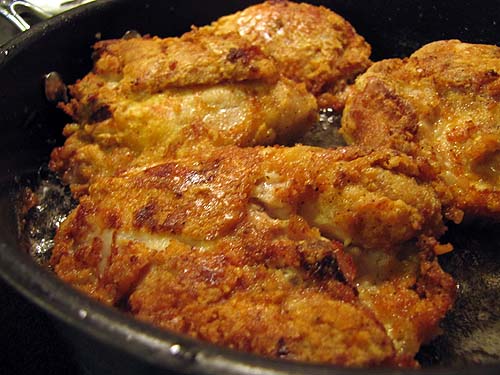 Drain well on paper towels. Eat. I hope you made mashed potatoes and biscuits!