I was down to very little meat in the freezers here last week since I haven’t had a chance, due to weather, to pick up my venison that I had processed. But I did find, forgotten, some nice meaty lamb stew bones. I decided to make a stew. Only I couldn’t go to the store. So I decided to make mystery stew–with what I had on hand!

What is a stew anyway? What sets it apart from soup? A stew is a dish of meat and vegetables cooked slowly in liquid. (Or a state of great anxiety, but that’s not the kind of stew we’re talking about here. Unless we’re talking about my great anxiety over all this bad weather, which relates to the other stew due to my inability to get to the store.) A soup is a dish of meat and/or vegetables combined with liquid (such as broth or stock) and boiled. Well, really, soups and stews are awfully similar because sometimes soups are simmered slowly also. Who makes up these definitions? I’m calling this a stew.

I would have liked to have made a more traditional lamb stew, which might have included peas and carrots and potatoes, but I had no peas and carrots. I did have beans. And potatoes. And bacon. I needed something green, and decided to make do with some chopped romaine. (I would have added onions, and did have onions, but Morgan doesn’t like onions so I try to be considerate.) I started with about two cups of dry beans. 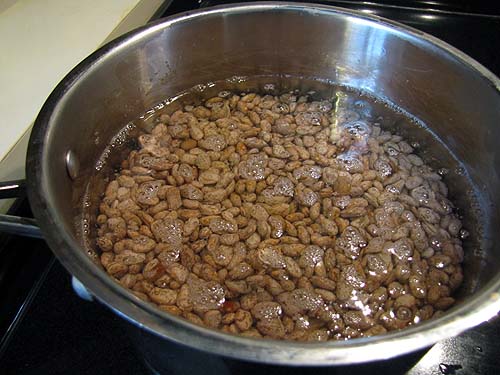 I did the boil and soak for an hour then, after draining and rinsing, simmered the beans for an hour, only partially cooking them, while I tended to the lamb stew bones. First, while the beans were simmering, I salted and peppered them, letting them rest seasoned for about 20 minutes. 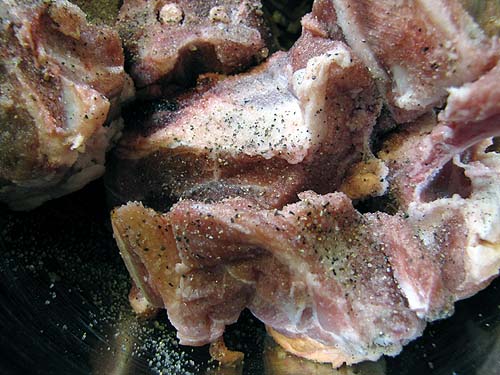 While they were resting, I fried about half a pound or so of bacon in a Dutch oven, just to the point of rendering out most of the fat. (Not going too crispy.) 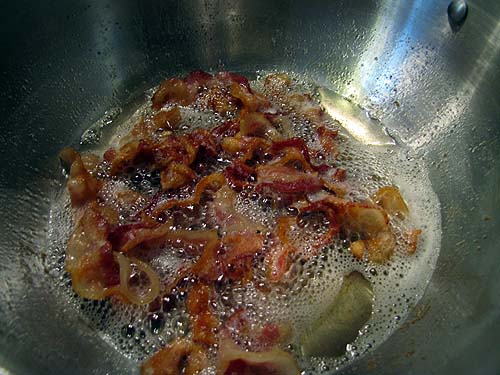 Setting aside the bacon, I browned the stew bones in batches in the same pot, in the bacon fat. 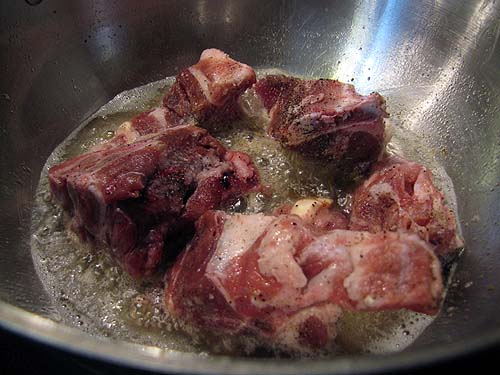 Once browned, I removed the stew bones from the pot. If you have too much fat left at this point, you can pour some off, but I didn’t have that much. I did have some flavorful meaty bits on the bottom of the pot, though. Must reclaim! 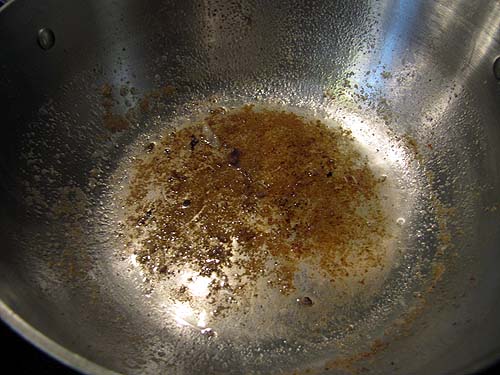 Can’t leave flavor on the bottom of the pot! It does us no good there. 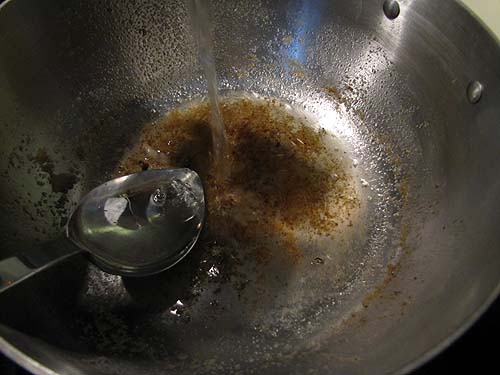 If I’d had red wine, I would have used that, but I didn’t, so I poured in maybe half a cup of white wine to de-glaze the bottom of the pot. 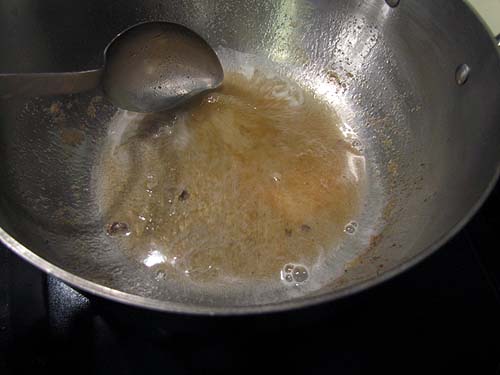 De-glazing, typically done with wine, is a way to bring up “sediment” (I like flavor morsels better) off the bottom of a pot. It makes a sort of gravy or sauce out of it. Now it’s time to start putting the mystery stew together! 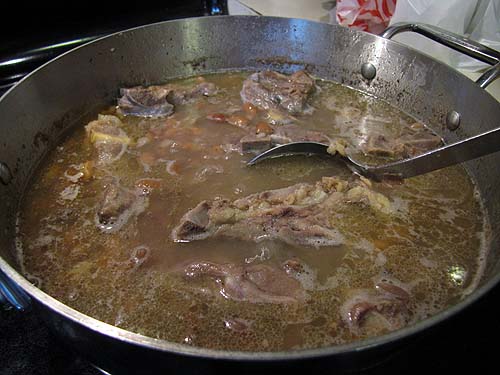 I put the browned stew bones back in the pot along with the partially cooked beans. I added chicken stock, because that was what I had. (I added about six cups at this point.) Then I simmered the bone-in meat and the beans for a couple of hours, very slowly. When the meat was falling apart tender, I removed the stew bones, flaked off the meat, and put it back in the pot with the beans. 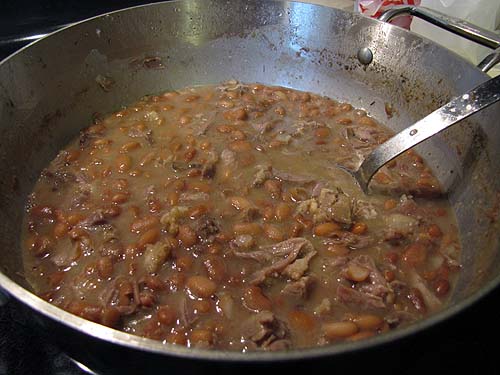 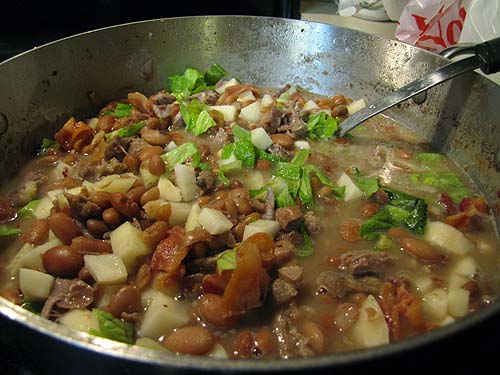 Roughly chopped bacon, four diced potatoes, and one chopped heart of romaine. I waited till the end of the cooking time to add the potatoes since I was dicing them. I knew it wouldn’t take them long to cook through and I didn’t want them to go mushy. I also added two more cups of chicken stock and about half a jar of crushed red peppers. I’M JUST KIDDING. But I did add quite a bit of crushed red peppers. We like things spicy here. Because I’d used an herbed chicken stock, I didn’t add any further herbs, and because I’d seasoned the meat with salt and pepper before browning, I also didn’t need to add any more salt and pepper. 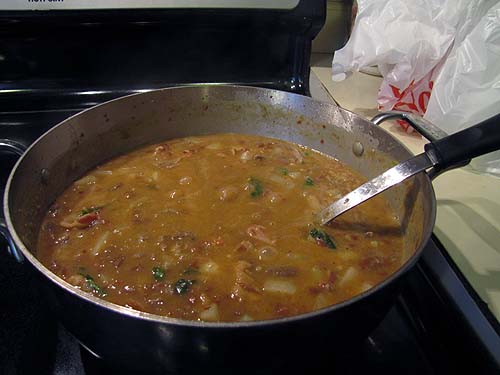 I simmered my mystery stew for about another 30-40 minutes, and it was ready! 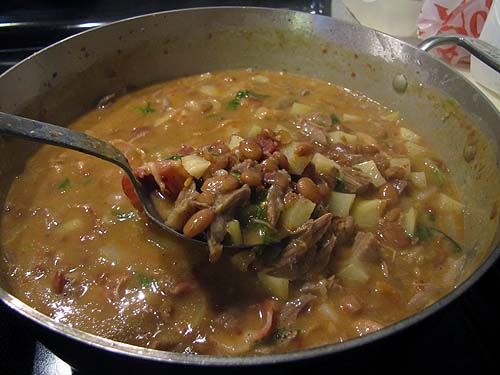 And delicious, let me tell ya!