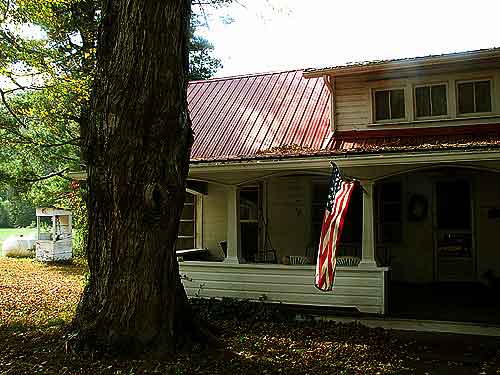 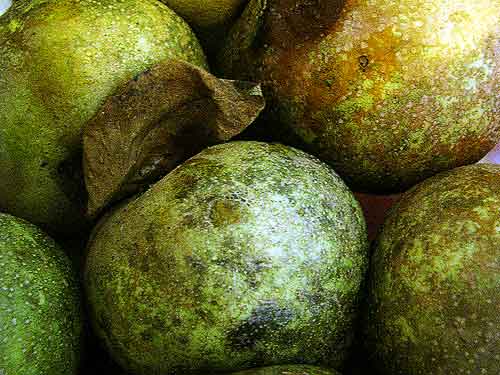 She had a big old bunch of them she’d gotten through a friend who has a pear tree. She can’t see well enough to read directions and she can’t take all the cutting up and stirring by herself anymore. Someday, when I’m old, I hope somebody will come help me make pear butter, too. Even if they don’t care about having any pear butter. And since Georgia doesn’t like to come over the rocky road to my house, or mess up her own house, we decided to meet at the old farmhouse.

Several days earlier, she’d called me to tell me about her upcoming pear bounty. “What should we do with the pears?” she asked. This is Georgia’s way of telling me she wants me to help her. She talks about what “we” are going to do with no preamble. I told her I’d check my recipes and find something. A few days later I gave her the choice between pear jam and pear butter. Another day or two later she decided on pear butter. Every time I talked to her, I said, “How are the pears looking?” And she’d say, “They aren’t ready yet.” Georgia doesn’t see very well, and when I got there on the day she told me it was time, half the pears were rotten and unusable, but we got enough out of them to make one batch of pear butter.

I’d forgotten (already!) what it’s like to cook in the kitchen at the old farmhouse. 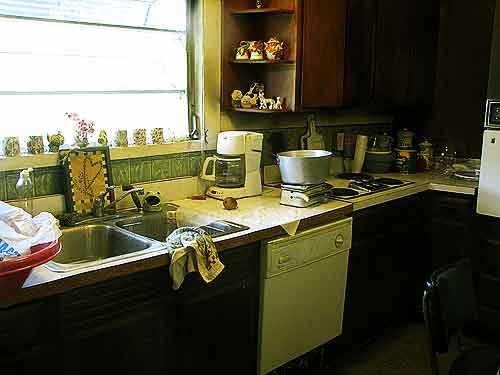 Unfortunately, that wasn’t quite the case. The old farmhouse kitchen is filled to the rafters with all sorts of things, but often not what you’re looking for. When I moved in there, the shelves and drawers were packed full of old dishes and odd implements, and things literally fell out of cabinets when you opened them. I spent the first few months there packing up a lot of things, adding organizational shelving and drawer inserts, and bringing in my own things in order to make the kitchen functional, semi-convenient, and pseudo-modern. I moved it all out when I left, and moved the old things back in.

And so we scrambled around and came up with the things we needed. We cut the pears and weighed them. (A kitchen scale! One of several things at the old farmhouse that I do covet.) 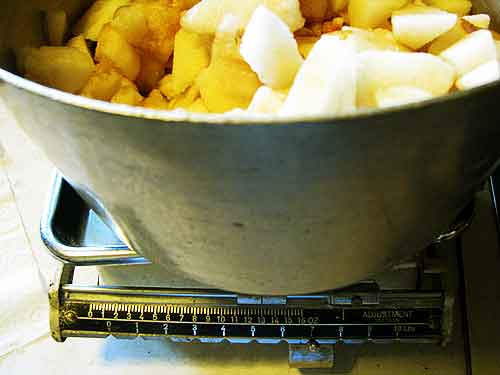 And then I said, “We need a big pot.” I was struck suddenly by the awesome fact that my big pot was not there any more. It was back at my new farmhouse a few miles away over the rocky road. Georgia said, “I suppose there’s one in the cellar.”

Yeah, along with the spiders, bats, and trolls. Okay. So I went to the cellar and came back with a miniature witch’s cauldron to cook the pears in. 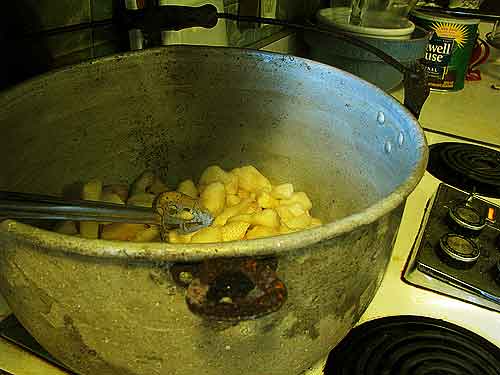 It wasn’t really that bad. After I scrubbed the dead bugs out of it. 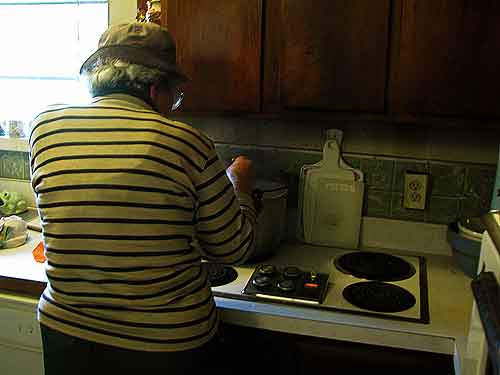 People! Do not be alarmed! We are cooking at the old farmhouse! We must be prepared for anything and willing to overcome all obstacles. (The mantra of anyone living in a 100-year-old farmhouse. I learned it well.)

While the pears were simmering, we chit-chatted a bit and then I checked around to see what was new. My cousin is running for re-election, so signs were posted and available. I took several back with me. I told Georgia, “I’ve never posted a political sign in my life, but for you, I will.” (I’m not a political person.) 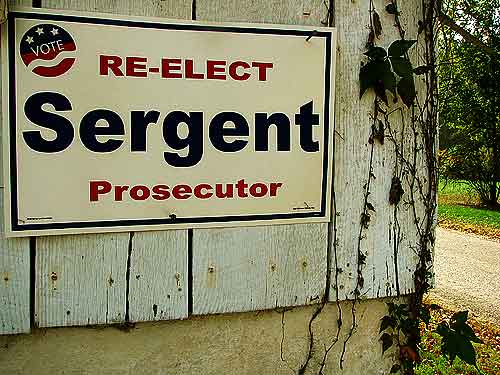 They have a new “foundling” cat. Her name is Trouble. She likes to hang out around the barns where I parked my car. 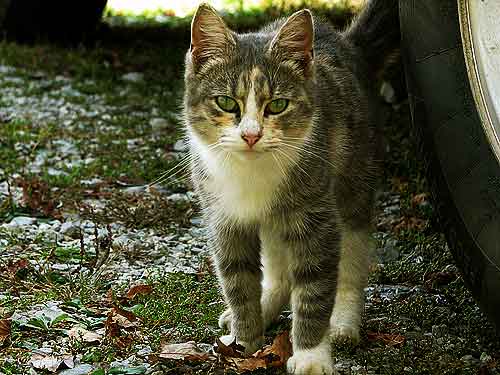 My cousin has also been grinding cornmeal for the Black Walnut Festival. 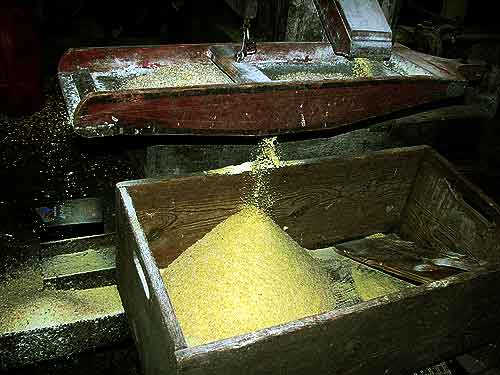 They’ve been bagging it up in the cellar porch to sell at the festival on Saturday. 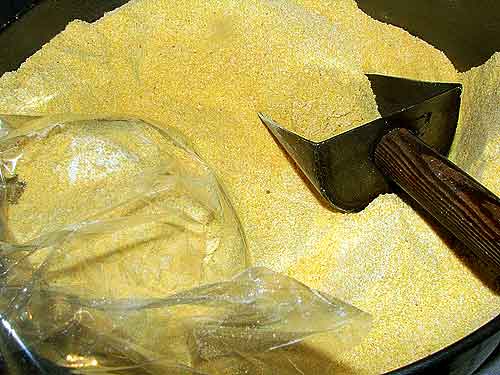 Since this process takes place in the cellar porch at the old farmhouse, usually I’m involved, helping with the machine that snaps the ties on the bags. This year, I wasn’t there. 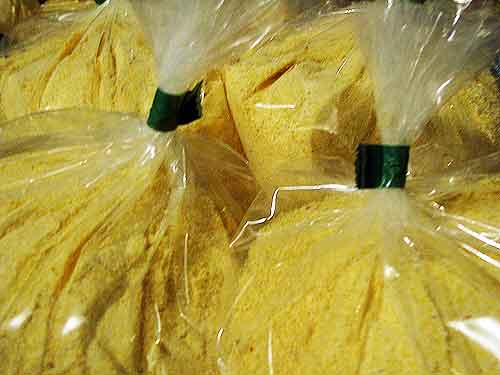 However, I made off with an overfull bag of fresh cornmeal for myself! (Look for my cousin’s cornmeal stand across the street on the backside of the courthouse if you’re at this weekend’s Black Walnut Festival!) Fresh-ground cornmeal makes the best cornbread you’ve ever had in your life.

And then we chit-chatted some more and the pears got soft. Pear butter time!

Printer-Friendly
How to make Pear Butter:

Core, peel, and slice pears. Cook in a large pot with 1/2 cup water until soft. Process in a food mill or food processor (or just mush, which is what I did). Add, sugar, grated orange peel, nutmeg, and orange juice. Simmer slowly until mixture thickens and rounds up on a spoon. (May take an hour or so. Enough time to wander around outside the 100-year-old farmhouse and take a few pictures.) Stir frequently. Ladle hot butter into jars, leaving 1/4-inch headspace. Put on lids and bands. Process in a hot water bath for ten minutes.

We canned them in the big canning pot on the gas stove in the cellar porch. 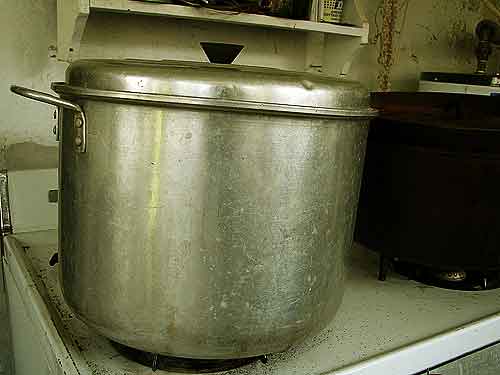 Don’t know how to can? Learn how here.

This recipe should make about 7 to 8 half-pint jam jars, but who knows. Georgia was in charge of bringing jars and that means you can expect anything. 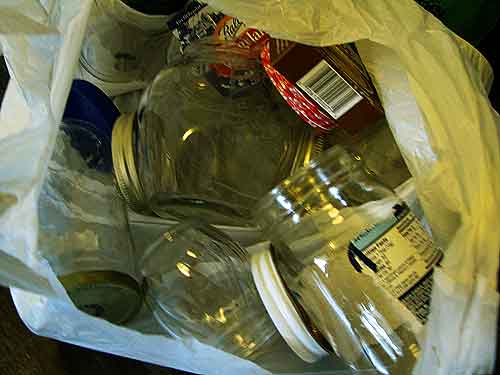 I managed to come up with enough jars with lids that matched to make three jars that were roughly pint-size or thereabouts, one regular jam-size jar, and one smaller jar (not pictured) that had no lid so Georgia just covered it with foil and took it home for immediate use. 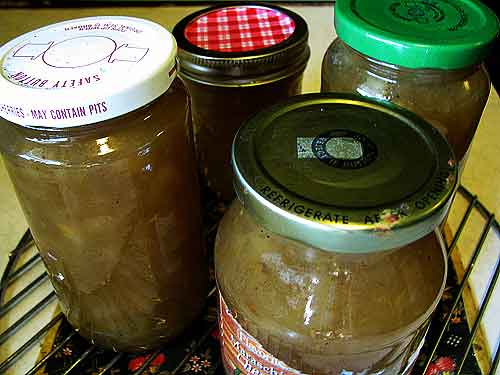 And I’m here to tell you, I’ve never had pear butter before, I didn’t have any particular desire for pear butter, but the aroma of orange and nutmeg and fruit simmering…….. Wow. And the pear butter? Spectacular.