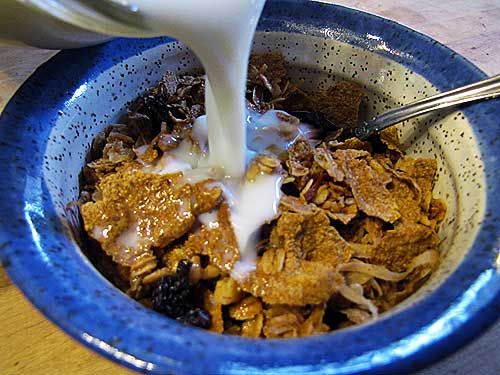 I’ve been on a homemade granola kick lately, and because one thing leads to another, one day when I didn’t have enough yogurt, I just poured milk over it. Hello, I have invented cereal! Okay, not really, I think someone else invented it, but I’m not sure who. They were a genius because cereal is delicious and it makes a fast breakfast. I don’t keep a lot of cereal around because the really awesome gourmet cereal mixtures I like cost around $7 a box. Cereal is one of the most expensive items in the grocery store. Even the non-fancy cereals.

I don’t know why I didn’t think about making my own before. I’ve been making a homemade granola mixture based on this recipe. I adapted it to a toasted oat and bran cereal with nuts and fruit. Just like those awesome $7 a box cereals at the store! Only it’s a whole lot cheaper. When you make your own, you can buy the plain, basic ingredients individually in store brands or in bulk. (Dried fruit in homemade cereal mixes can be fruit you dehydrated yourself.) Put it all together just how you like it and you have the best cereal in the world.

Here’s a breakdown of the components of those fancy cereal mixtures. Mix and match! (You can probably think of more. These are just starting points.)

The grains: Oats, bran flakes, wheat flakes, shredded wheat, rice crisps, and so on. This is the backbone of the cereal.

To dry toast the oats etc, spread in a pan and toast for about 15 minutes at 350 degrees. Let cool before mixing with your other ingredients and storing.

For a granola cereal, toast with a coating of molasses, maple syrup, or honey mixed with equal parts vegetable oil and brown sugar plus a little cinnamon, and vanilla (if you like). You could use apple or other juice in place of the syrup. Toasting the granola mixture takes longer than toasting dry. Stir frequently and be careful not to burn it. Once the mixture toasts dry, let it cool before combining with your other cereal ingredients and storing. If you add your other ingredients right at the end of the toasting phase, you can make the “clusters” cereal because the bran or wheat flakes and dried fruit will stick to the still-gooey granola mixture and make little clumpy bits!

Here’s how I made my toasted oat and bran cereal with nuts and fruit. Decrease the brown sugar in this recipe if you want a low-sugar recipe. Or toast dry and use no sugar at all. Notice there’s no salt in the recipe. One of the great things about mixing your own is controlling the sugar and salt and every other ingredient.

Mixing with the plain bran flakes keeps this cereal from being too sweet. 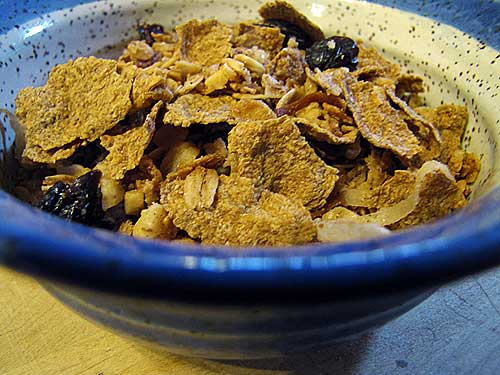 Printer-Friendly
How to make Toasted Oat and Bran Cereal with Nuts and Fruit:

If you don’t want to make this granola style, omit the syrup, oil, brown sugar, cinnamon, and vanilla coating mixture. Just toast the oats, coconut, and nuts for about 15 minutes at 350. When cool, add the bran flakes and dried fruit. Toss with a little sugar when serving, if desired.

To make it granola-style, combine everything but the bran flakes, raisins, and dried cherries in two 9 x 13 pans. Stir to coat evenly and spread out in the pans. 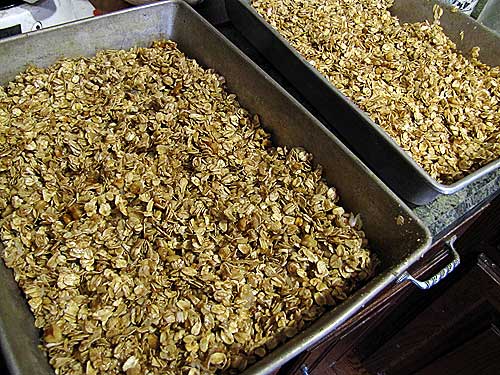 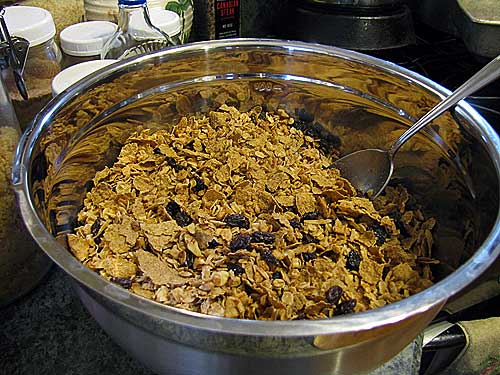 Store in an airtight container.

Fancy gourmet-style homemade cereal with milk. (Beulah Petunia made the milk. She’s good at that.) 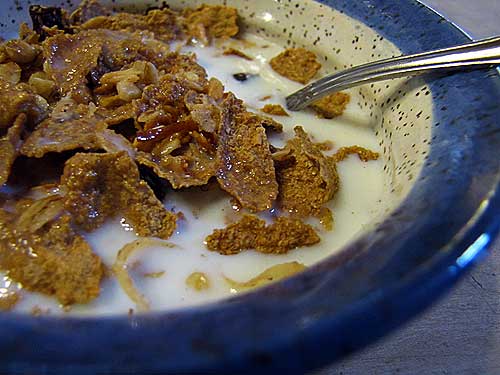