On the way home from Texas, we passed through West Monroe, Louisiana. I couldn’t resist stopping at the Duck Commander warehouse store, which isn’t far off the interstate. 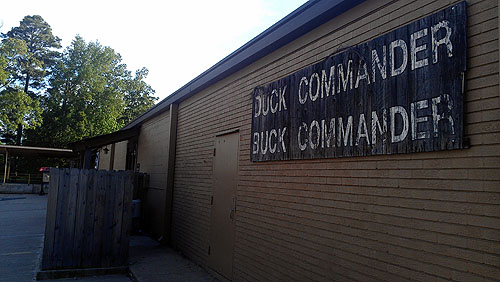 I’m a fan of the Duck Dynasty show, so this seemed unreasonably exciting. 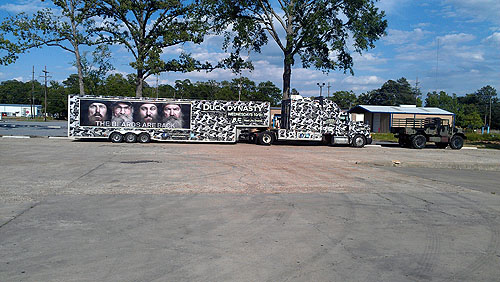 Weston and Morgan are not fans, but at least they woke up for it. 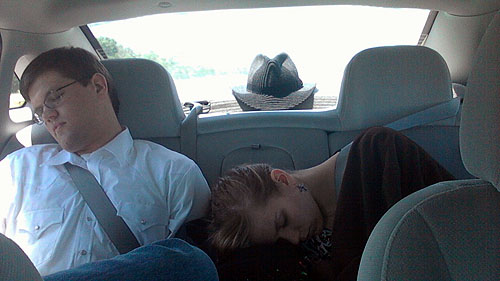 Of course, I had to get myself a little souvenir, so I chose Miss Kay’s Duck Commander Kitchen cookbook. 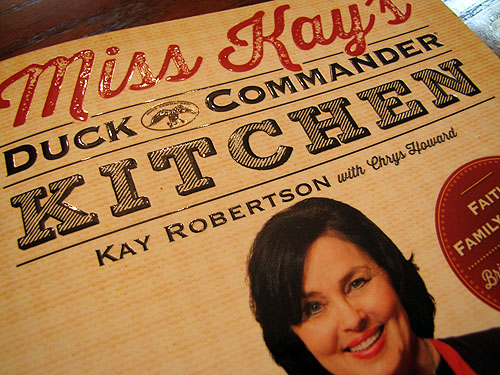 Miss Kay is so cute. I wonder if she and Phil would adopt me now that I have no parents? I wouldn’t even expect to be put in the will! I just want to cook with her in her kitchen.

Though if they could get rid of that dang Missy so I could marry Jase…. I have a crush on him. NEVER MIND. I’ll always have my bobble head. 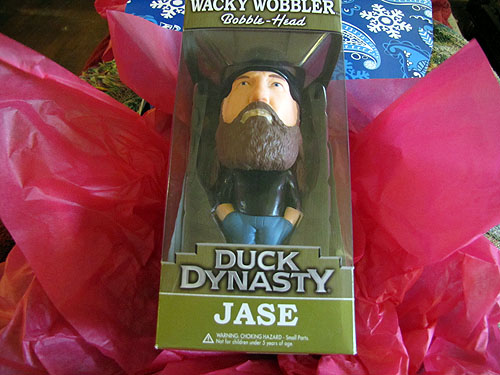 I didn’t expect much of this cookbook, to be honest. I’ve been tempted into purchasing celebrity cookbooks before and they’re usually disappointing. Miss Kay (for the unitiated–wife of Phil Robertson, the patriarch of the Duck Dynasty family) is no usual celebrity. These are “real” country people who only came into fame at a later point in their lives, so the cookbook was a happy surprise. These are real family recipes from a real family, and a real woman who loves to cook. Some of the recipes are old-fashioned (like Hot Water Cornbread). Some are wild game (Squirrel with Soup Gravy, anyone?). Some are ridiculously tempting (like Willie’s Armadillo Eggs–not eggs, by the way, or anything armadillo). And some are just plain good family suppers (like Pecan Chicken). It’s actually a good cookbook. I really want to make the Armadillo Eggs sometime soon (this is bacon and sausage wrapped cheese-stuffed jalapenos–could that be more insane and delicious?), but I don’t have the ingredients on-hand and am trying to avoid my car after just getting back from a 20-hour road trip. I did want to try something right away, though, so I went for, of course, a bread recipe. 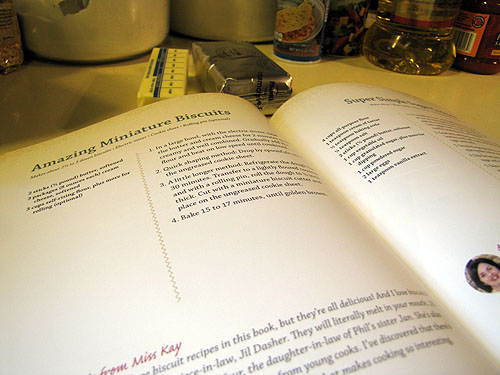 A crazily delicious-sounding bread recipe. Biscuits. With nothing but self-rising flour, cream cheese, and butter. How can this not be good? 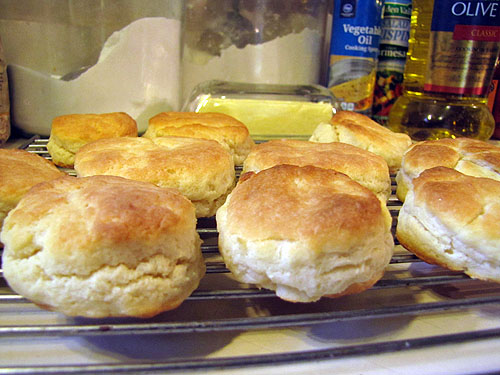 *No permission is given to use margarine, but I’m sure you could, though Miss Kay might be disappointed. And I guess you could use light cream cheese. Whatever. Look at the ingredients here. This is not intended to be a diet biscuit, so I wouldn’t even go there.

In a large bowl, with an electric mixer, beat the butter and cream cheese until creamy and well combined. Gradually add the flour and beat on low speed until combined. Note: I only made a one-third quantity of the recipe because I didn’t want that many biscuits. Okay, I only had one package of cream cheese. And as I mentioned before, I was avoiding getting in my car. 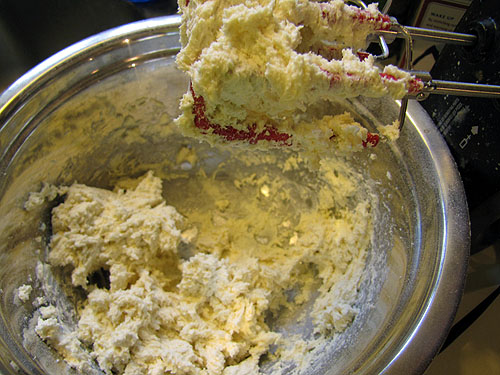 You’ll have to scrape the dough off the mixer blades.

Drop by spoonfuls onto an ungreased cookie sheet. (One can imagine why the cookie sheet doesn’t need to be greased.)

Or, you can refrigerate the dough for at least half an hour then roll it out and cut with–the recipe instructs–a miniature biscuit cutter. I wrapped the dough in waxed paper to refrigerate for 30 minutes. No reason why you couldn’t refrigerate it for much longer or overnight. 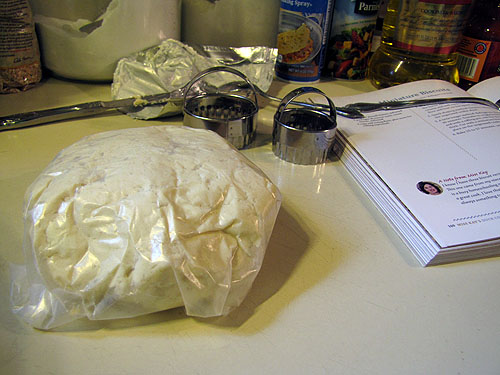 After rolling out my biscuits on a floured surface, I cut them out. I don’t know why these biscuits are supposed to be cut with a miniature cutter other than that they are called Amazing Miniature Biscuits. I did some small, and some regular size. Do whatever you want. They don’t have to be miniature. 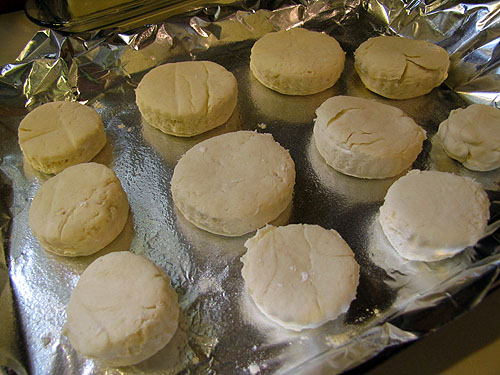 The recipe says to bake for 15-17 minutes. THERE IS NO TEMPERATURE GIVEN FOR THE OVEN. This reminds me of one of those vintage cookbooks where everybody assumes you know how to cook, but probably this was just an editorial error in the book. Maybe. I bake biscuits at 450-degrees, so I baked these at that temperature also and it worked out just fine–though I found it only took about 10 minutes for them to bake, which made me wonder if Miss Kay’s baking temperature might be 400. I’ll have to experiment. You know, since she didn’t specify. She’s so cute. 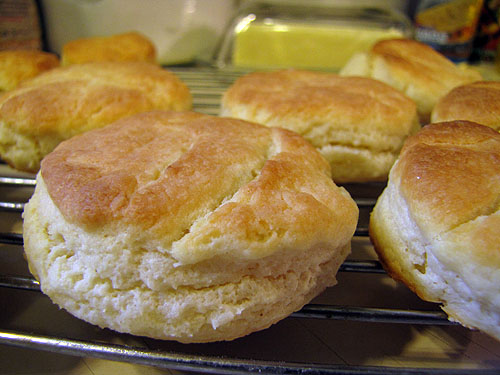 These are some great biscuits, very tender, as I expected.

I’ll post about it when I make the Armadillo Eggs, but that’s it. I really think you should buy the cookbook, so I won’t post more than to review it and tempt you. I recommend it. And I don’t think I’ve ever said that about a celebrity cookbook before–but this is actually a useful cookbook with a variety of tempting recipes!