Add some crunch, sparkle, and pop to your baking with natural sugars! Most recipes call for white sugar, brown sugar, or confectioner’s (powdered) sugar, but there’s more to the world of sugar than refined. There are the natural sugars, or what are sometimes called “raw” sugars. The three most popular natural sugars are turbinado, Demerera, and Muscovado (also known as Barbados).

Both Demerara and turbinado sugars are made straight from the raw cane juice, thickened by evaporation. The resulting syrup is spun into coarse, pretty crystals rich in the molasses that is removed from white and brown sugars in the refining process. (While molasses is removed permanently from white sugar, it’s actually removed then put back in brown sugar. Why do they take it out then put it back in? For uniformity of the product. Of course, all that processing takes away from the flavor as the molasses is stripped.) 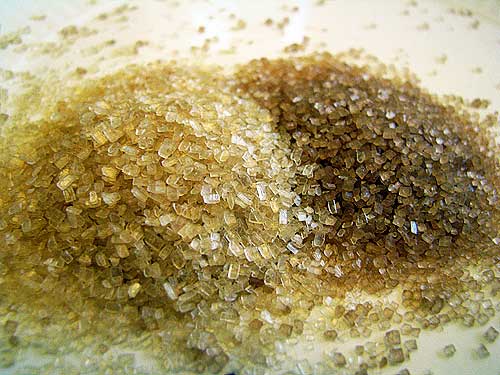 Turbinado sugar is the lightest of the natural sugars. It has a nice hint of molasses flavor, but not too much. Demerara is much bolder. Both turbinado (named for the process of spinning the cane syrup in a turbine) and Demerara (so-called for the location in Guyana where it originated) make great sweeteners in coffee or tea. Either can be used as cup-per-cup replacements for white sugar in recipes and will add extra flavor and crunch to cookies and cakes. Demerara can also be used to substitute in recipes calling for light brown sugar. Consider turbinado a strong “white” sugar and Demerara a strong light brown sugar when it comes to recipe flavoring.

Muscovado is the strongest of the natural sugars and is made by a different process. It’s steamed dry rather than spun. It’s quite dark and can be used cup-per-cup in place of dark brown sugar (consider Muscovado a very strong dark brown sugar when it comes to recipes), but it can be difficult to find because it’s not nearly as popular (due to its strength, which some people find too overpowering) as turbinado or Demerara. I don’t have any Muscovado sugar right now, though I’m on the lookout for some. It’s rough living in the boonies sometimes. Those of you with access to more shopping venues can probably locate it easily. (Luckily, I have no problem finding turbinado or Demerara, even in the country.)

These “speciality” sugars are more expensive than regular ol’ refined sugars, so I most often use them frugally as a finishing touch (though I will be posting some special recipes where I actually do use them in place of regular sugar–I save them for special when it comes to cup-per-cup substitution). Natural sugars are great for rolling cookies or adding sparkle to the tops of cakes or pies, and occasionally, when I’m in the mood, in my coffee. Because of the coarse granules, they’re also gorgeous sprinkled over fruit, and, of course, they’re just plain fun, another fabulous, cheap thrill in the kitchen.

And if you’re not having fun when you’re baking, you’re doing it wrong! 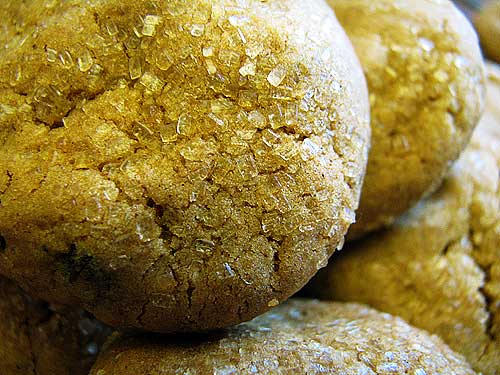 Soft Ginger-Raisin Cookies rolled in turbinado sugar. How fabulous is that? (Want the recipe?)