I have a love-hate relationship with tater tots. What’s not to love about a fried bundle of shredded potato deliciousness? Except that all the tater tots I’ve ever had came frozen and seasoned with a sprinkle of cardboard flavoring. (Cardboard Season-All, find it in your grocer’s baking aisle!) For some reason, it never even occurred to me to make tater tots from scratch.

Oh, my. Homemade tater tots are a whole ‘nother world. This, yes this, is a true fried bundle of potato deliciousness.

I was watching an episode of “Best Ever” (I think!) on Food Network where they were at a restaurant making tater tots from scratch when the light bulb went off over my head. Hello, you can MAKE tater tots. They don’t have to come stamped out in regimented order from a factory, frozen, with cardboard flavoring.

They didn’t provide a recipe in the episode, but they showed the process, and after watching it, I worked on recreating my own rendition.

Peel potatoes; cut in half and parboil about five minutes. Drain and cool potatoes then shred with a grater (using the large holes). 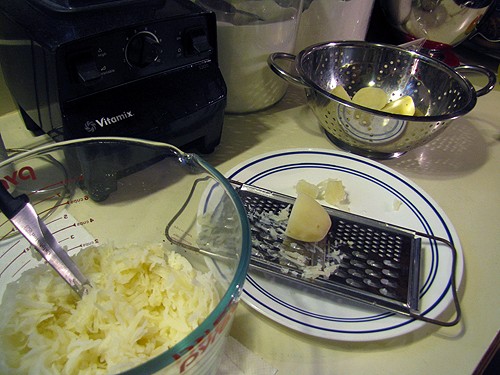 The parboiled potatoes will be very sticky-starchy, but this sticky-starchiness is the real binder when you form the tots, so don’t curse it too badly. Parboiling the potatoes does a few things. Partial cooking helps them cook the rest of the way quickly when you fry them up, and it also brings out the starch. If you overcook them before forming the tots, you’ll lose that starchiness and have to use some other binder, such as an egg. (Which you can do. In fact, they did that on the show. And you can, too, if you want to! I preferred to make them without adding any egg, and parboiling is sufficient to allow them to cook up when you fry them.)

Place the shredded potatoes in a mixing bowl and combine with all the other ingredients except the bread crumbs. Vary and adjust the seasonings to your tastes. If you don’t like onions, don’t use ’em! You can leave them out entirely, or use something else–peppers or even crab or shrimp or bacon. The world is your tater tot! Make them however you like. And really, what’s NOT good with potatoes? Anything will do. Just don’t overload on the add-in. The sticky-starchy of the potatoes is the binder, remember, and too many other ingredients will make your tots crumble. And who wants a crumbled tot? (Okay, I had one or two that crumbled because it was a spoonful or two where the onions were a bit heavier in the mixture–because apparently I didn’t mix them up well enough–and I fried them up and they were still delicious. But we’re trying to make tots here.)

Note: I used mozzarella for the cheese, but you can use cheddar or whatever you have on hand. You can leave the cheese out, also, but for the love of Pete, WHY?

Scoop a large spoonful at a time out of the bowl to form the tots. This is going to be messy, so just be one with the tot and get on with it. Squeeze the mixture in your hand and the starchiness of the shredded potatoes will come together to hold its shape.

At this point, you can go ahead and fry them as they are, or dip them in an egg wash then in bread crumbs. I tried them both ways, and they’re delicious both ways. I decided I liked the extra step of the bread crumbs for the added texture. Up to you. (Do NOT dip them in a milk wash–they fall apart immediately. Use an egg wash. I used two whole eggs, whisked.) 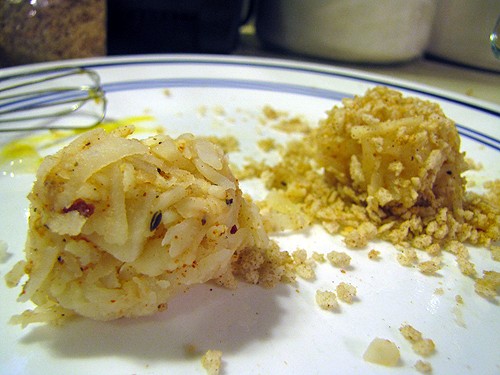 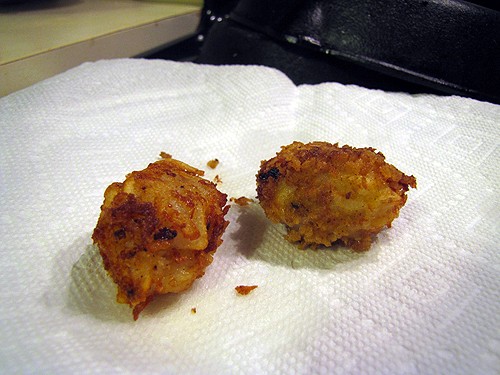 Since I decided I liked the breading, I went on and prepared the rest of them that way. 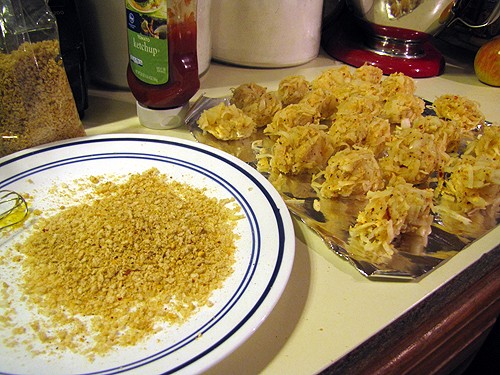 In either case, fry tots in a skillet in hot oil, a few minutes per side. Drain on paper towels. 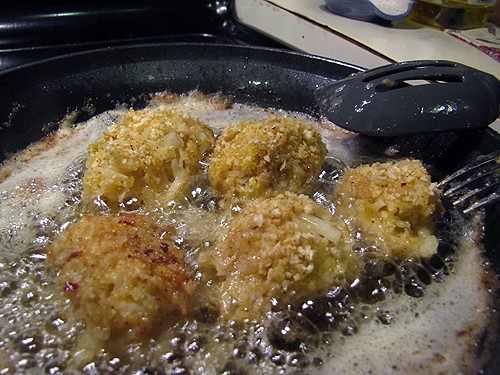 I haven’t eaten tater tots in a long time because I just can’t stand the frozen ones from the store, so I’m happy that tater tots are back in my life! 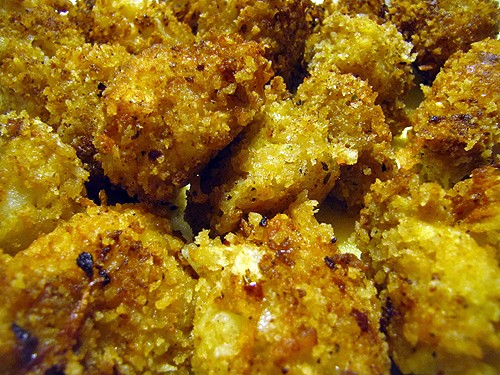