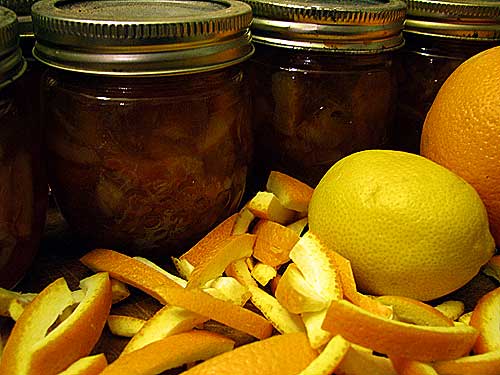 I’ve always been fascinated with orange marmalade. I grew up reading English-flavored books, from Paddington Bear to Agatha Christie’s Miss Marple series. English stories are sprinkled with references to orange marmalade. What was that stuff? I didn’t grow up eating marmalade. Just the word is exotic. Marmalade. My mother grew up in Oklahoma and my father was from West Virginia. Neither of those states produces citrus fruit. We weren’t a marmalade family.

I don’t imagine England produces a huge orange crop, either, but they do seem rather obsessed with marmalade in spite of it. Why?

Once I was grown and grocery shopping for myself, the first time I saw orange marmalade on a store shelf, I tucked it in my cart. Exciting! I had no idea what it was, but I wanted it.

It was good enough, but not nearly as exotic as I thought it would be. I was a little disappointed. Like I thought maybe Paddington Bear might pop out of the jar and join me. (He didn’t.)

So I forgot about marmalade and Paddington Bear and Miss Marple for awhile. Then I took a trip to England and experienced orange marmalade all over again. This orange marmalade was different–better! In fact, wonderful! More real bits of orange and more real slivers of orange peel, nothing like I remembered from that long-ago tasted storebought sample. It was around this time that I was learning to make homemade jam and I started thinking about making my own marmalade. Real marmalade. Not that I live in a citrus-producing state now either (lucky you are if you do!), but still–I just knew homemade marmalade would fulfill all my Paddington Bear and Miss Marple dreams.

Oddly, in the past few months, I’ve gotten several emails asking if I could recommend an orange marmalade recipe. I knew it was time.

Don’t know how to can? It’s easy! See How to Can: Hot Water Bath Method. You can also get answers to your questions right here! Check out the canning section on the Chickens in the Road Forum. We’re here to help!

Printer-Friendly
How to make Orange Marmalade:

One of the great things about making your own marmalade is that you have total control over the final product. If you like it chunkier, make your pulp pieces chunky! If you don’t like chunky, slice it very small. Make your peel slivers as tiny or big as you like. It’s up to you. 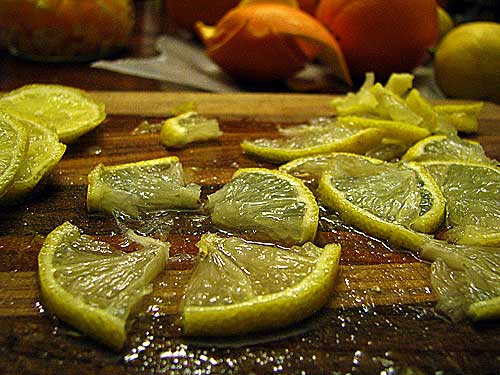 You don’t have to please anyone but yourself and your family. It’s also hard to go wrong in this recipe because after you let the chopped fruit and peel sit, you re-measure it before adding the sugar. So let’s go! 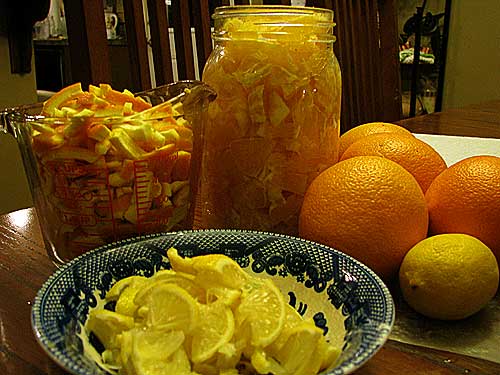 Chop and slice everything up and combine it all in a big pot with the water. (Do not add sugar yet!) Bring to a boil then simmer for 5 minutes. Cover and let sit for 12-18 hours. I started my marmalade in the evening so I could let it sit overnight. 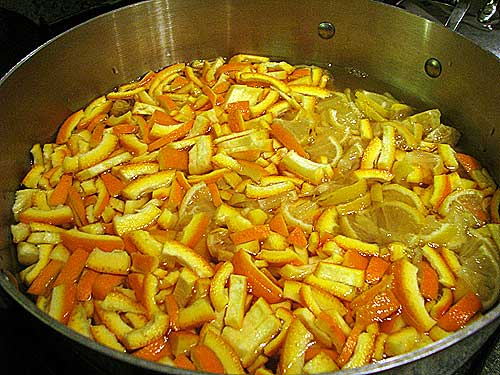 Making marmalade reminds me a little bit of making cheese because it’s one of those things that looks difficult, but it’s really not, and most of the time spent making it is time that you aren’t doing anything with it. 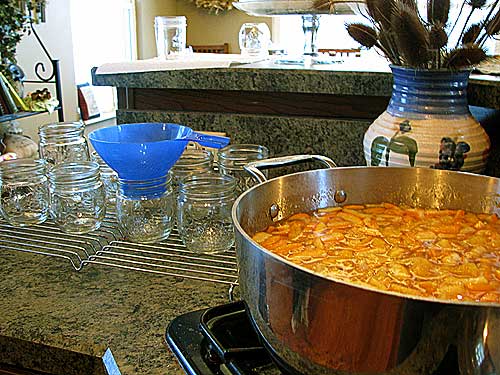 For me, the measurements took 5 large oranges and 2 medium lemons. I had some orange peel left over. You can use any remaining peels in other recipes, dried for potpourri, or even added to a tea ball to steep in your hot tea. No wasting!

After 12-18 hours, bring the pot to a rapid boil and cook until the peel is tender. (It will have already softened up some after sitting for hours.) When peel is very tender, turn off the heat and measure the mixture. I used a 2-cup measure and transferred it to a large bowl then dumped it all back into the big pot when I was done. Add one cup of sugar for every one cup of mixture. Turn on the heat under the pot again and stir until the sugar dissolves. Bring to a boil over high heat, stirring constantly. (Add a bit of butter to prevent foaming.) Cook rapidly almost to the gelling point. 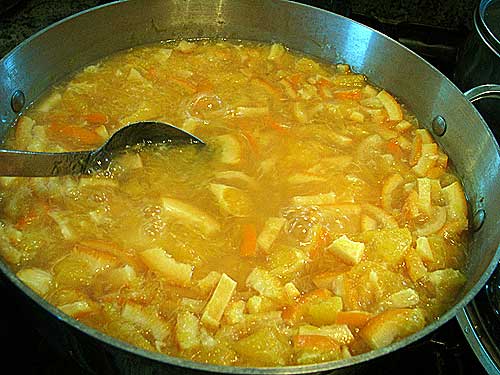 As mixture thickens, keep stirring to prevent sticking. Remove from heat. Skim foam if necessary. Ladle hot marmalade into hot jars, leaving 1/4-inch headspace. Add lids and bands. Process 10-minutes in a hot water bath. For me, this made 10 half-pints.

Note: If you have trouble with recipes that have to come to a gel without pectin, add pectin! Follow the recipe as stated above except–after measuring the mixture and returning it to the pot, add a package of pectin and bring it back to a boil. Add the sugar, bring to a rolling boil then boil hard one more minute before removing from heat and ladling into jars. (I was really worried about mine gelling, but it came out perfect and I didn’t use pectin.) 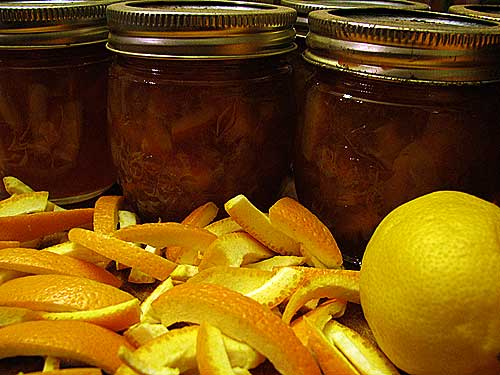 To win: Leave a comment on this post and let me know you want it. You can just put (BBB) at the end of your comment or otherwise note that you want to be in the draw. One winner will be drawn by random comment number to receive a Ball Blue Book. Eligible entry cut-off is midnight Eastern (U.S.) time tonight. This post will be updated with the winner no later than 9 AM Eastern (U.S.) time tomorrow. Return to this post to see if you won.

UPDATE 02/02/10: The randomly drawn comment number is #10–ticka1! Email me with your full name and address for shipping.

THIS CONTEST IS CLOSED TO ENTRY.