My boy in the kitchen! 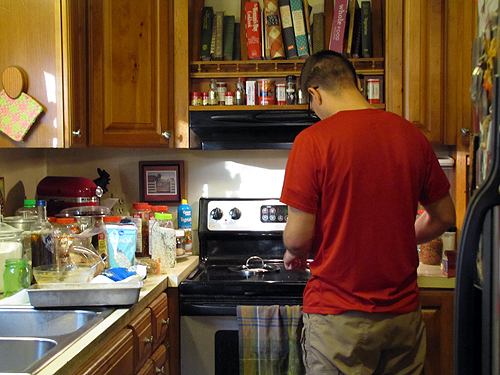 Well, a man, I should say! He is 22 and in the Army! But, he’s still my boy. Weston was home for Thanksgiving, along with Ross and Morgan–for the whole week. During this time, Weston did a lot of his own cooking. He’s back to eating vegan now, and he sent me a slew of recipes before Thanksgiving. I did some shopping in advance for ingredients, then we did a trip together after he was here, too. He likes to cook, and I helped him prepare the recipes. One was a recipe for Millet and Peanut Butter Buckeyes. This recipe created a lot of conversation because the recipe included the tip to use coconut oil in melting the chocolate, but only if necessary, because some coconut oil brands use coconuts that are picked by monkeys. Not only is this intolerable monkey slavery, but also destroys habitat. Or so I’ve heard. This inspired entertaining discussion such as:

“Aren’t we now enabling an entire generation of entitled monkeys?”

And from Google: “Over 99% percent of Thailand’s coconuts are picked by monkeys. The other fraction of a percent are picked by humans. And yet still, 600 humans a year are killed by coconuts falling on their heads.”

We had a good time with this discussion and we didn’t use coconut oil in making the peanut butter buckeyes.

Point to note: The original recipe (source: Thug Kitchen) called for millet. Millet is a grain-like seed. Quinoa is also a grain-like seed, and because millet is hard to come by around here, and because I had quinoa on hand, we used quinoa in the recipe. You could, in fact, eliminate this ingredient in the recipe entirely if you prefer, though it adds a crackly crunch to the buckeyes. I liked it, you might not, up to you! I also think this recipe would be good with crunchy peanut butter, though creamy was called for in the recipe.

Toast millet in oil in a skillet over medium heat, about three to five minutes. Line a baking sheet with parchment paper or wax paper. In a medium bowl, mix together the peanut butter, powdered sugar, flour, and vanilla until it thickens into dough. Fold in the millet and mix thoroughly. 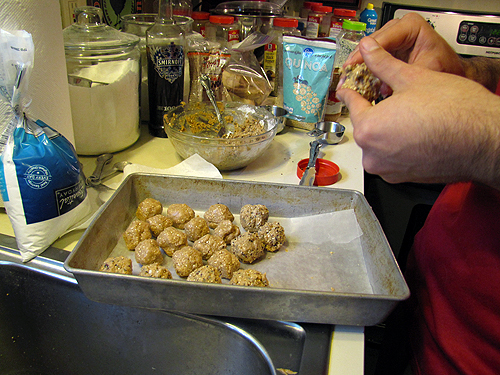 Make walnut-sized balls with the dough and place them on the baking sheet. 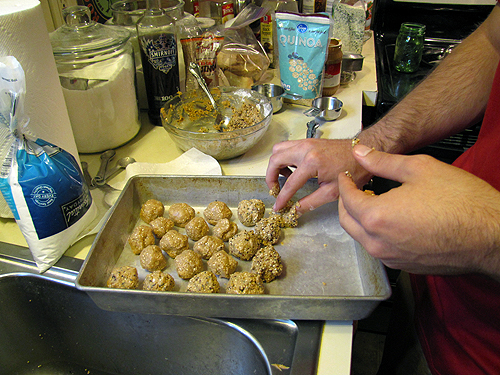 This is sticky business! I think it would work best to chill the dough first before shaping the balls. 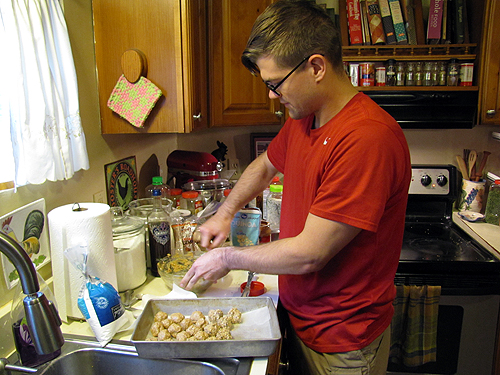 Put them in the freezer for 30 minutes to two hours. Just before removing balls from the freezer, melt the chocolate. 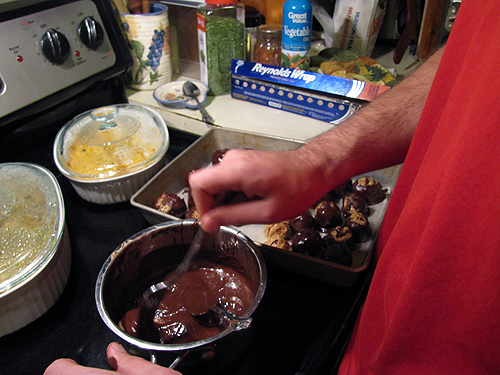 Gently lower a ball into the chocolate using a fork. For the buckeye look, leave a small hole exposed. 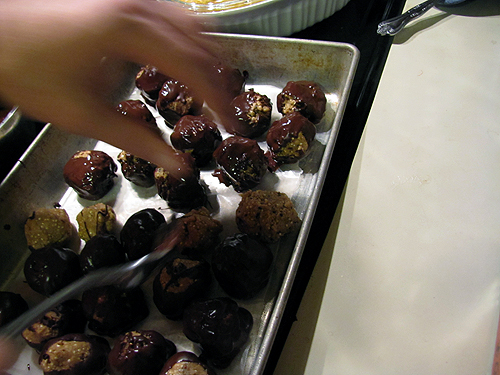 Drip off the excess chocolate and place the buckeye down on the baking sheet and repeat with the rest of the balls. Freeze for at least 30 minutes to firm before serving. 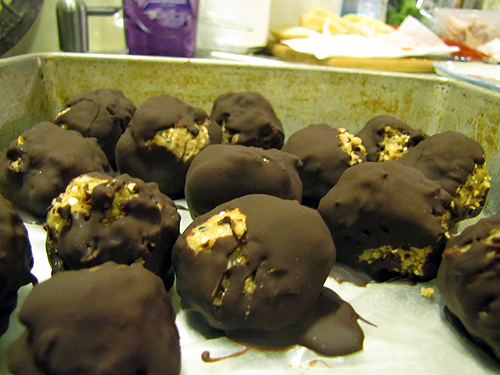 Weston was making a triple batch here, which made a couple dozen larger balls. If you made smaller balls, it would make more. It was a good thing he made plenty–these were popular with everyone!