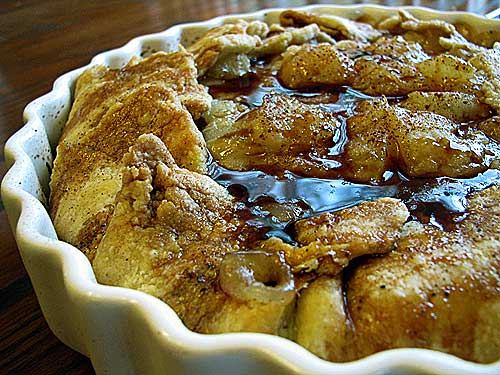 We went pear-picking this weekend when friends offered to share their giant, over-producing pear tree bounty. And was there ever bounty. 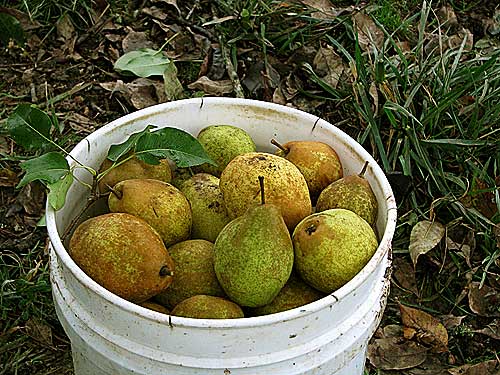 Somebody has to be the pear tree shaker. 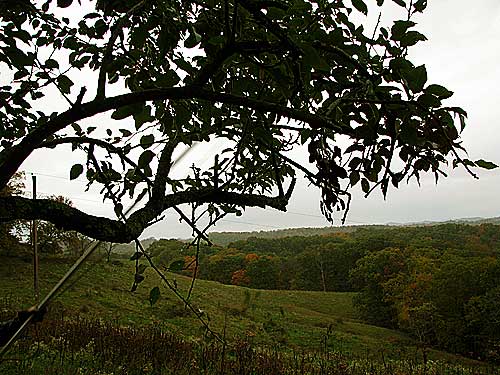 And somebody has to be the pear picker-upper. 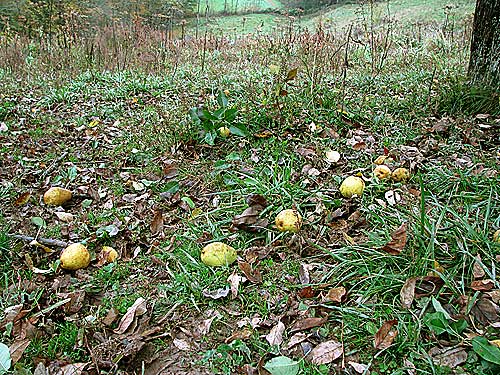 That would be me. I was also the official pear photographer. 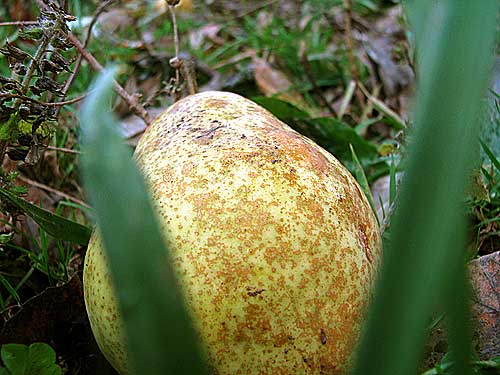 I was almost too busy to pick up pears! 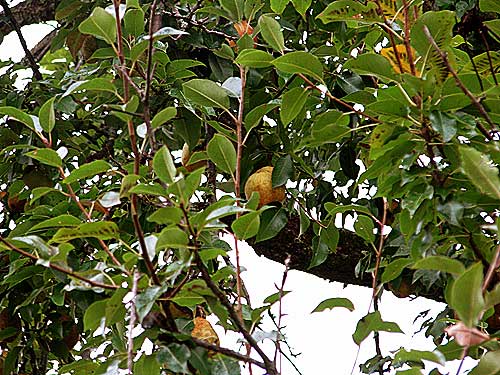 Look at that view. We were picking pears on a beautiful ridgetop…. 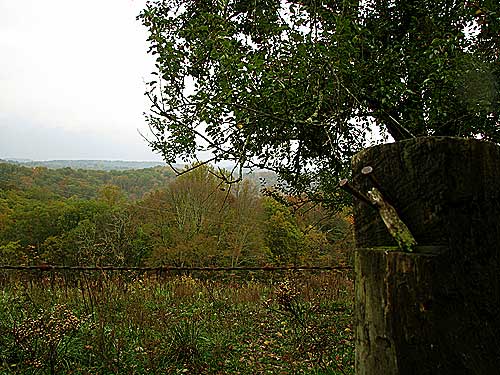 ….on a beautiful autumn afternoon. 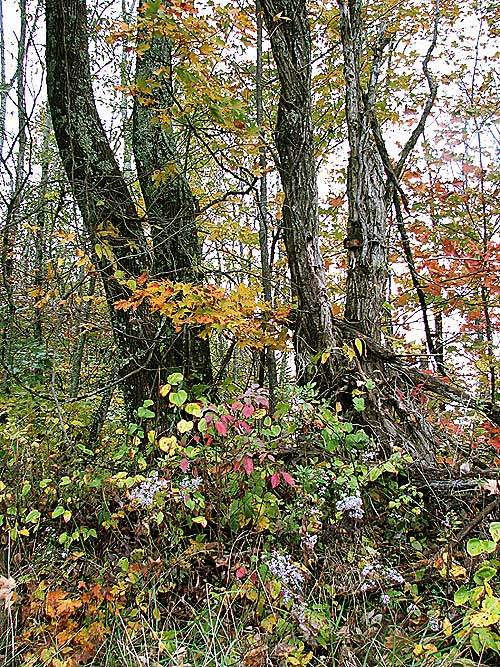 We came away with six big bucketfuls. 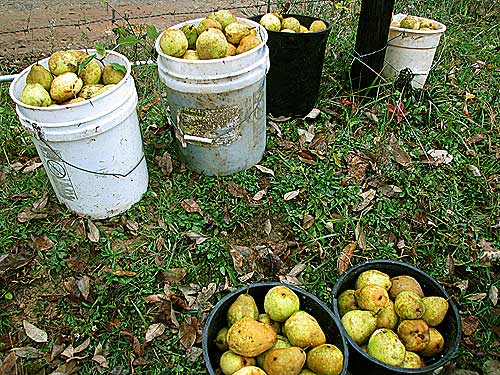 And I was in the mood to bake!

Of course, these pears aren’t ripe yet. They’ll have to sit a bit. Luckily, I had some pears I’d blanched and frozen a few weeks ago. (To freeze pears, peel and core. Cut in halves, quarters, or slices. Treat to prevent darkening and prepare a medium syrup by combining 3 1/4 cups sugar with 5 cups water. Bring to a boil. Blanch pears in syrup for 2 minutes. Cool pears and syrup then pack pears in freezer bags and cover with syrup leaving 1/2-inch headspace; seal.)

I’ve been having a hankering to try this recipe here. I’d packed my pears for freezing in 2-cup baggies. The recipe called for 5 pears, peeled, cored, and sliced. I have no idea how many pears went into my 2-cup baggies. I only know it measured out to 2 cups. Besides, what does 5 pears mean? Big pears, medium pears, little pears? And what’s a big pear or a medium pear anyway? Should I take out two of the 2-cup baggies for 4 cups? Or just use one 2-cup baggie? This was a huge dilemma, let me tell you. And what should I bake it in? The recipe suggested baking the galette on a jelly roll pan. I was having a soiree and I wanted a prettier presentation plus I wanted to bake it in something where I’d keep all the juices in. But not a pie pan. Another dilemma! It’s amazing I ever got this thing baked.

And you are wondering–what’s a galette, anyway?

A galette is a pie that never grew up. A pie with no conscience. A pie that wasn’t raised right. In other words, it’s a pie that’s not in a pie plate. A pie made with pie pastry as its shell, but it doesn’t quite look like a pie.

Morgan, who is notorious for her disdain of all things pie (what is wrong with her??), came into the kitchen as I was taking the galette out of the oven. She took a look at this pie that does not look like a pie and I said, “Doesn’t that look good?” I was teasing her because I know she doesn’t like pie. She said, “Yes, can I have some now?”

She didn’t realize it was a pie.

Oh, and about all that dilemma–I decided to use one 2-cup baggie and I baked the galette in a small (8-inch) tart (or quiche) pan. The 2 cups was just right and the tart pan made for a pretty presentation and also held all the juices in the galette.

Spray an 8-inch tart pan with oil and line with pie pastry. Sprinkle crust with cheese. 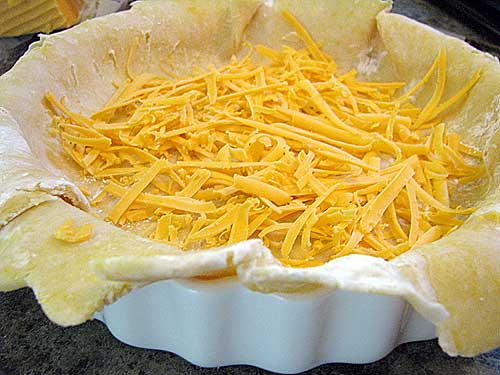 Fold edges of pastry up over the pear mixture. I sprinkled the top with nutmeg. 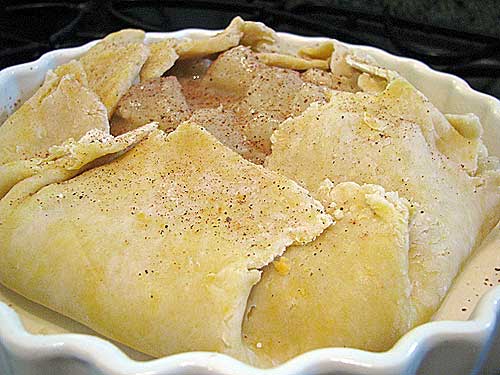 Bake at 400-degrees for 30 minutes or until crust is lightly browned. Cool on a wire rack.

To prepare the burnt sugar syrup topping, in a small, heavy saucepan (cast iron is best), heat sugar until it dissolves. Drizzle syrup over galette. (See more about how to burn sugar here.)

All the desserts I made for our little soiree: Maple Pecan Pie (with Bourbon), Old-Time Burnt Sugar Cake, and Iced Oatmeal-Raisin Cookies (without icing, because I was out of vanilla candy coating), and the Pear & Cheddar Galette. 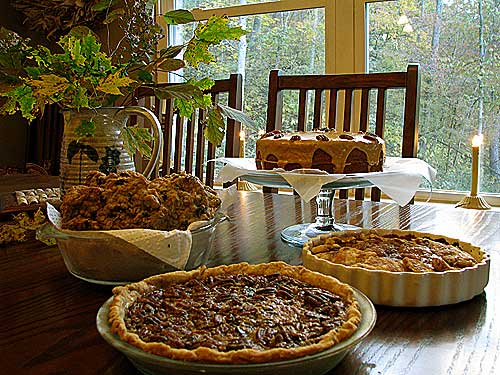 We had three couples over for wine, appetizers, and desserts. They brought appetizers (and wine). I served the desserts. It was a very lovely evening on the farm with friends and wine and laughter and chickens. We decided the Pear & Cheddar Galette was delicious. 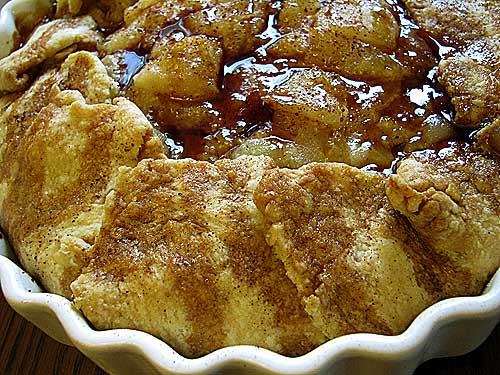 P.S. This would also be wonderful with apples! (Pears work great in a lot of apple recipes. If you’re looking for new pear recipes, look at apple recipes!)