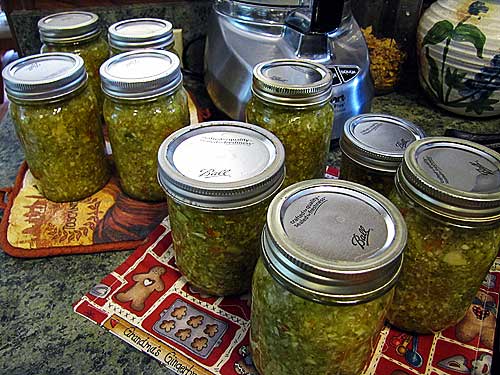 I believe I have just about canned enough pickles this year. Current count:

I’ll be canning some more sweet gherkins next week. I’m still saving up tiny cukes for that one. Other than that, I think I need to stop. We’re having a bumper cucumber crop this year, but there comes a point where it’s just silly and a waste of resources (time, jars, propane) to put away more. I’m providing for our needs, not stocking a pickle warehouse. I already have more than plenty to use and to give away to friends and family. I started canning the bread and butter pickles in quarts because I was using up too many pint jars on pickles. I have a zillion quart jars, but much fewer pint and half-pint jars. Pint and half-pint jars tend to be the size that stuff goes in that you give away, particularly jam, and there goes the jar…….. The only person I can count on to give me my jars back after she finishes whatever I gave her is Georgia. She’s an old-time home canner–she knows the value of a jar and she knows that I need it back so that I can give her something new in the jar. 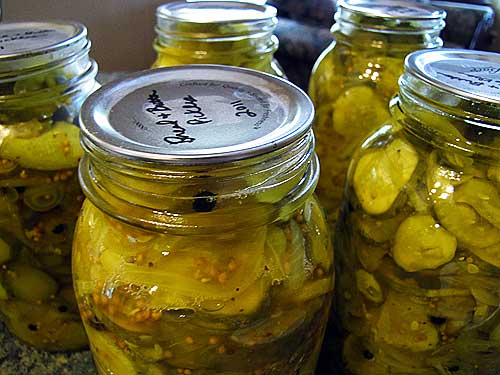 Bread and butter pickles are a happy combination of just enough sugar with just enough vinegar to be sweet but not cloying, and they’re very easy to make (and can). The store-bought variety seems to be the pickles only most of the time, but your home recipe usually comes with sliced onions along with the other usual suspects in a pickle recipe. Pickles are cheap. If you have a good cucumber year, that’s a lot of pickles. Many people during the Depression would have been growing their own gardens and had their own onions, too.

I have absolutely zero authority for this statement, but I suspect the second explanation (that people during the Depression ate pickles on buttered bread) is the correct one. Homemade bread, butter from the family cow, and pickles from the garden. I can see people down on their financial luck calling that lunch. Or at least a tasty snack. Calling them bread and butter pickles just because they’re common? Apple pie is common. Why don’t we have bread and butter pie? And so on.

To further shore up my meaningless assertion of this insignificant historical point, I buttered a piece of bread and put some pickles on it. 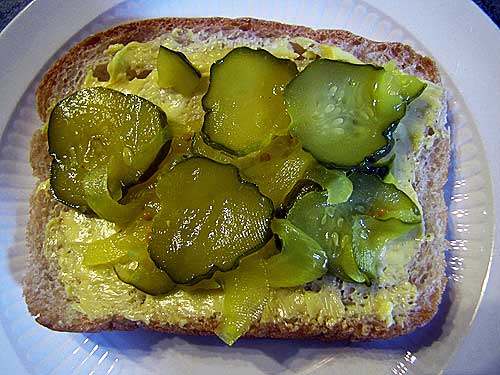 And it was quite tasty.

Or something. Anyway! Who wants a BBB today?

For a chance to win: Leave a comment on this post and let me know you want it. You can just put (BBB) at the end of your comment or otherwise note that you want to be in the draw. One winner will be drawn by random comment number to receive a Ball Blue Book. Eligible entry cut-off is midnight Eastern (U.S.) time tonight (July 22). This post will be updated with the winner by 9 a.m. Eastern (U.S.) time tomorrow (July 23). Return to this post to claim your book if your name is drawn (or check the BBB Winners List).

NOTE: You must be registered to comment. If you’re not registered, you can register here. If you’re already registered but not logged in, go here to log in.

UPDATE 07/23/11: The winning comment number, drawn by random.org, is comment #3, morningstar. Email me at [email protected] with your full name and address for shipping!