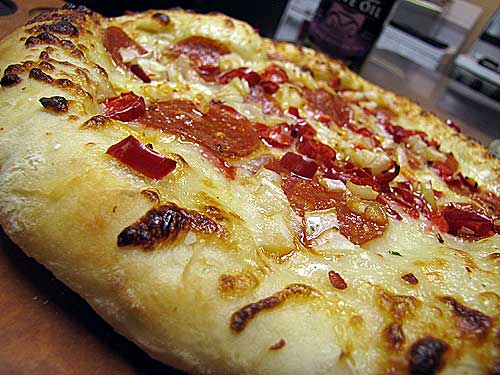 Recently, I was gifted with several “seasoned” pizza screens and pizza board (also known as pizza “peels”) and I’ve been experimenting. I love them. (Thank you, Edie!) They came from an Olive Garden restaurant, which is why they are already seasoned, and truly, if you can get used screens, they are the best.

Retired Olive Garden pizza screen. The only thing that would make it better would be if it were completely blackened. Now THAT’S a perfect pizza screen. This one is good but still aspires to perfection. 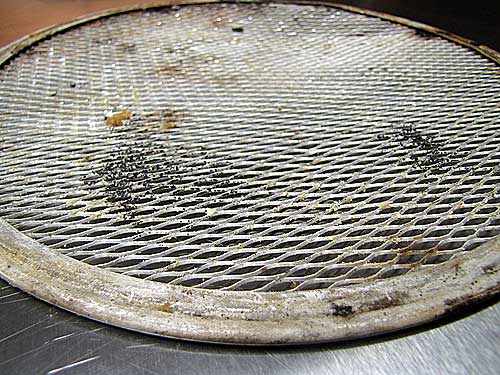 Pizza pros use pizza screens or pizza stones. I’ve used stones from time to time, but I’ve never gotten hooked on them. Screens don’t have to be preheated as stones do, and there’s no worry about breaking them either. Because a screen has holes all over the bottom (it’s a screen!), it promotes a more evenly baked crust by allowing air to circulate beneath the crust. My main problem was getting over my desire to simply roll the dough out right on the screen. Uh, that’s a good way to get your dough to stick to the screen! Instead, roll the dough out on a well-floured surface then transfer it to the pizza screen–making sure the bottom of the pizza is still well-floured. Cornmeal works well, too. 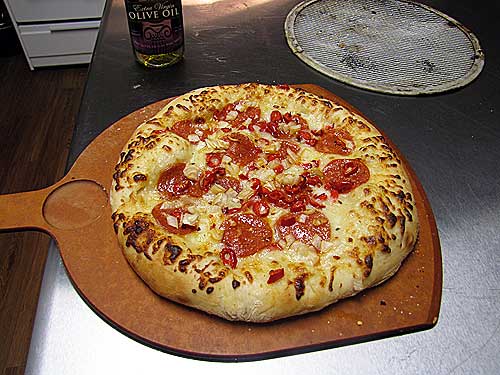 I’ve found a screen makes the tastiest pizza I’ve ever had. Even using the same dough, it just tastes different. Better. Amazing.

Printer-Friendly
To make my pizza dough (based on a reduced Grandmother Bread dough) using 12-inch screens:

Combine water, yeast, and sugar in a bowl. Let sit 5 minutes then add salt, olive oil, and first cup of flour. Stir and continue adding flour until it’s too hard to stir, then start kneading, add more flour until a smooth, pliable dough is formed. (You can also use a food processor or stand mixer to make the dough if you prefer.) This is not the time to go for a wetter dough–make sure it’s sturdy or it will stick later. Place dough in a greased bowl and let rise about 30 minutes.

Place dough on a well-floured surface. (Add a little cornmeal to the surface, too.) Roll, shape, stretch dough into a 12-inch circle. Spray a pizza screen WELL. Transfer the dough to the pizza screen, making sure the bottom of the dough is still well-floured.

Mostly, I don’t use sauce on my pizzas anymore. I like to drizzle a bit of olive oil on the top, spread with a brush or the back of a spoon, and scatter herbs and/or garlic salt, then go straight to the cheese then the toppings. I made this pizza with mozzarella, pepperoni, and sliced red peppers. Bake anywhere from 425 to 500 degrees. A lower temperature will make a softer crust. A higher temperature will make a crispier, chewier crust. (Don’t walk away–it cooks fast at 500!)

A pizza screen should be treated like cast iron–never wash it with soap! Clean it, but maintain its seasoning and it will be much less likely to ever stick to anything. You can use a pizza screen to bake lots of other things, too, like bread sticks or cinnamon sticks, and I’m looking forward to experimenting. 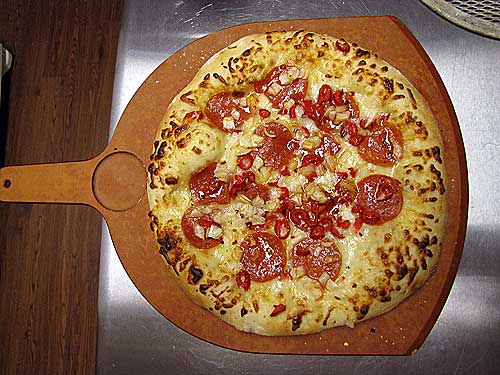 If you can’t find any pre-seasoned (used) pizza screens, just put “pizza screen” in a search engine and you’ll come up with online sources to buy new ones. You’ll also want a pizza board (or peel) to get it out of the oven. If your screen is seasoned/sprayed and you’ve used a well-floured surface, your pizza should slide right off the screen onto the board with little encouragement–and be delicious!

Save this to your recipe box at Farm Bell Recipes: Pizza Using a Pizza Screen