Making old-fashioned popcorn on the top of the stove is almost a lost art in today’s world of microwave popcorn and fancy air-poppers. Ask your average kid today how to make popcorn and a good number of them are likely to tell you how many minutes it takes in the microwave. Even when I was growing up, my father (who was the official popcorn popper in the family) used Jiffy pans. I have no idea why he, who grew up on a farm in the era of doing everything for yourself, eschewed the simple matter of measuring out the popcorn and oil for himself and went with the pre-measured and packaged foil Jiffy pans, but I grew up without ever seeing anyone pop popcorn the old-fashioned way and had to learn how later. There’s a little bit of a trick to making good popcorn, with no burning and few old maids (unpopped kernels), but it’s easy once you know how. 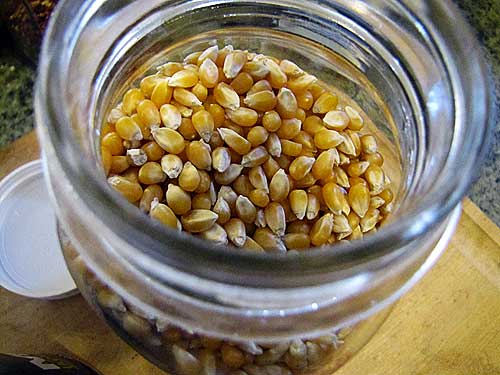 Popcorn is the perfect natural snack, much healthier than chips, and it’s cheap, cheap, cheap! But not so cheap if you’re buying it in those microwave packages. You can make popcorn for pennies on the top of your stove. You don’t need an air-popper–and in fact, I think air-poppers give a weird flavor to popcorn. I had one and got rid of it long ago. The best popcorn is made the old-fashioned way, and it doesn’t really take much more effort than an air-popper or microwave. You can season it up a thousand different ways to suit yourself and make your own gourmet popcorn.

The simplest popcorn, flavored with nothing more than butter and salt, is my favorite most of the time, but sometimes I also like to add a little sugar, or even some cinnamon-sugar. Occasionally, I get adventurous and try some other spices or herbs. Good ones to try are cayenne, garlic, and pepper. Or sprinkle in some Tabasco sauce. Whenever I make popcorn, I make a big pot and snack on it for days. There’s no point making a little popcorn. It’s addictive. It’s one of my favorite snacks anytime, but I find myself making it more in the winter for some reason. The sound of popping corn is homey and comfortable. It makes me think of my dad in the kitchen with his Jiffy pan, and my grandmother in her kitchen making popcorn balls at Christmas.

This is the size recipe I make in my 5-quart pot. You can cut the measurements in half for a smaller pot. If you’ve never made anything but air-popped or microwave popcorn, here’s how to make REAL popcorn, the old-fashioned way:

Printer-Friendly
How to make Old-Fashioned Popcorn:

Put 1/4 cup vegetable oil in the bottom of a large pot. Place three popcorn kernels in the pot.

Turn the heat to medium-high. Watch for the kernels to pop. They’ll be popping before you know it–don’t go away!

Once all three have popped, add all the popcorn and the salt, put on the lid, and remove the pot from the heat for 30 seconds. This allows the rest of the popcorn to warm up before returning to heat, which will mean fewer unpopped kernels in the end. Note: Adding the salt before popping helps evenly distribute the salt throughout the popcorn. I use two teaspoons of salt. If I’m going to be adding sugar, I add it later, after the popcorn is popped, unless I’m making Kettle Korn and want to “burn” the sugar, in which case you’d add it before popping.

Put the pot back on medium-high. Using oven mitts to hold the pot, begin shaking the entire pot over the burner. Try to hold the lid on the pot as you shake so that the cover is just slightly cracked–this helps vent steam and make your popcorn crisp. 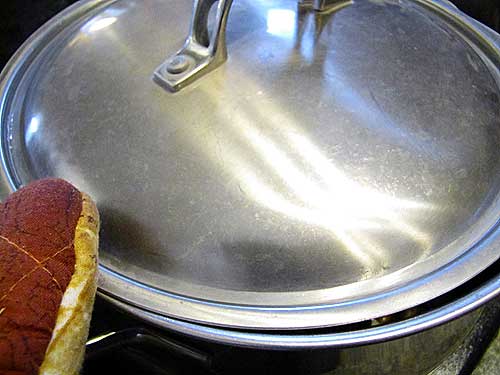 Continue shaking the pot until you don’t hear kernels popping anymore. Remove from heat. Drizzle (lavishly!) with butter and/or whatever else suits your fancy. 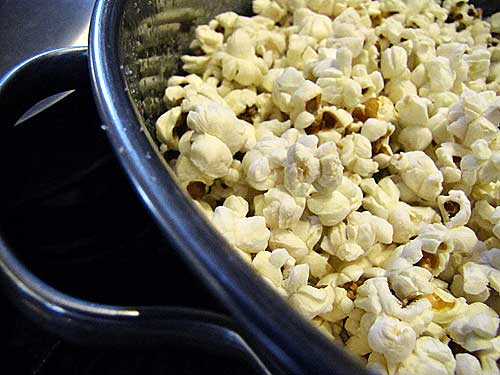 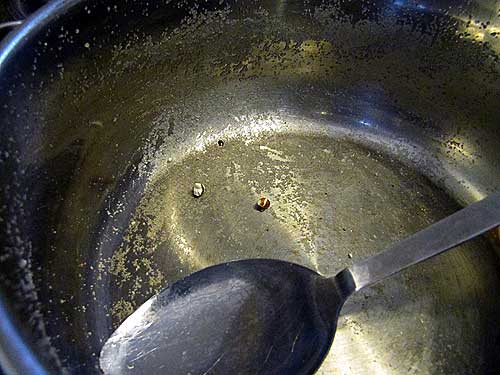 Have ever tried popping popcorn in bacon fat? Now that’s disgustingly delicious, let me tell you. You can also try different flavored oils, but avoid oils that smoke. I usually just use plain vegetable oil.

Goodies you can add in to a bowl of popcorn include red hots, M&Ms or other candies, all kind of nuts but especially cashews and peanuts, raisins and other dried fruit pieces, pretzels, or Chex cereal.

For cheesy popcorn–I don’t like powdered cheese, but if you must, get some higher-quality powdered cheese, such as from an Amish store. The best thing to do is melt some real cheese for your popcorn. To make a cheese sauce, place 2 tablespoons of butter and 2 tablespoons of flour in a small saucepan, stirring to make a roux. Gradually stir in 1 cup milk. Add 1 1/2 cups of any shredded cheese, stirring to melt. Add other seasonings as desired, pour over popcorn, and mix well. Depending on how much popcorn you’re making and how much cheese flavor you want, you might need all the sauce or only part of it. You can cut it in half if you want. Try parmesan cheese and black pepper!!!

Here are some popcorn recipes I found on Farm Bell Recipes:

I love that Kettle Korn recipe, by the way. LOVE IT.

What is your favorite way to make popcorn? How do you make it–old-fashioned, air-popper, or microwave?