This is our third year to attempt to cultivate rhubarb, and our first year to have success. Behold, rhubarb harvested from our garden!

Rhubarb is a weird plant. There is actually some conflict over whether it’s a fruit or a vegetable. Traditionally, it’s a vegetable, but functionally, it’s used as a fruit. A court in New York in 1947 determined it to be a fruit for all intents and purposes, so you can call it a fruit if you want to. Or a vegetable, if you dare, since it really is one. Except not legally. It would make a good argument!

Rhubarb actually looks and feels a lot like celery. It has long, reddish-green crispy stalks, which are edible. The leaves are toxic. Don’t eat ’em! The stalks have a very strong tart taste. I’ve hated, loathed, and despised rhubarb most of my life, and I don’t even know why. I don’t remember ever consuming any rhubarb. My mother never put any rhubarb on our kitchen table that I can recall. In my childhood, West Virginia was the land of farms and gardens to me, and it was there that my non-suburbia grocery store tastes were challenged by, you know, real people with real food that they actually grew themselves. Some time way back in the dark recesses of my childhood–most likely on a trip to West Virginia–some poor farm mother (probably my Great-Aunt Ruby) must have fed me some rhubarb that wasn’t sweetened quite enough to pass the palate test of a child. And I would never eat rhubarb again. Until now. Now I’ve been desperately attempting to cultivate it for three years. Call it my renewed passion for all things old-fashioned, or call it my advanced adult tastes, but rhubarb is delicious and interesting. It’s known as “the pie plant” but you can use it just as you would many fruits–in not just pies but cobblers, cakes, muffins, breads, jams, jellies, syrups, wines, and more. For the non-rhubarbista, it can go down easier mixed with another fruit. It’s most popularly combined with strawberries, but you can combine it with anything. Rhubarb comes back year after year, and is one of the first things ready to harvest from the garden–and will keep producing till fall. Rhubarb doesn’t do well in hot, dry climates, and it needs at least two months of cold weather in the winter.

One of the handy things about rhubarb, especially if you’re harvesting a little at a time as you’re just getting your rhubarb patch going (like me), is that you can dry pack rhubarb to freeze. Just chop it up and stick it in a freezer bag. When you have stored up enough for your recipe, take it out. I love something that can be dry-packed. To use rhubarb in recipes, it’s usually chopped finely and cooked to soften–and unless you can take the tart, you’ll need a good dose of sugar to tone it down.

I’m collecting rhubarb right now, freezing batches as they’re ready from the garden, and planning all my rhubarb fun in the kitchen. I’m reformed about rhubarb. I used to hate it, but now I love it. What about you? Do you love it, or do you love to hate it? I’ve picked up a lot of rhubarb recipe talk lately on the internet–it seems to be another one of those vintage ideas that is on a comeback with celebrity chefs turning it into a trendy gourmet delicacy.

My Great-Aunt Ruby would be proud. And baffled. 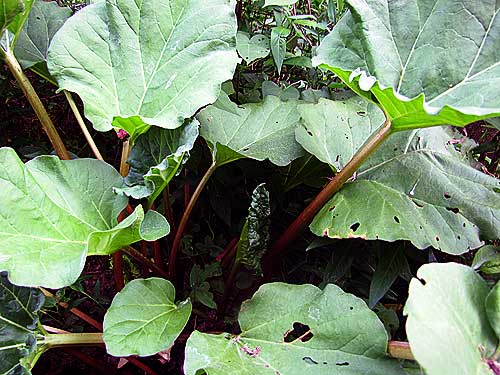 Then she’d say, “Pshaw,” and head back to her garden because she knew it was a good thing all along.