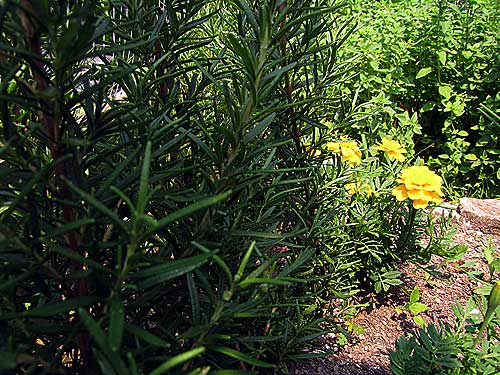 The trouble with Nigella, of course, is that she writes recipes in that elementary school ruler-smackin’ on your fingers unintelligible metric measurements. (By the time you grow up, everybody’s going to be using metric! SMACK! Except……!!!! NOT!!!) See? I’m so not over that fourth grade trauma!

Anyway. She also calls ingredients by weird names. (Like caster sugar. Which is what we call superfine sugar. Which I translate to plain old sugar and I’m here to tell you that works just fine in the recipe. Though, right after I made this cake, I found this easy tip from CindyP for making your own superfine sugar.)

Here is my rendition of Nigella’s rosemary remembrance cake, with a few shortcuts (due to what I have on hand) and simplified to measurements that I can grasp. I used a cup of plain applesauce instead of chopped apples to simmer with the rosemary sprigs because I didn’t have any fresh apples and I had some home-canned applesauce. The apples will be pulverized in the food processor anyway. I also didn’t have a fresh lemon, so I had to forego the zest. I used bottled lemon juice. (I would recommend using the fresh with the zest if you have it. This is definitely a do as I say not as I do thing. I was just too lazy to leave the holler for a lemon.)

You can check out Nigella’s original recipe here.

Combine apple, small rosemary sprig, the 1 teaspoon sugar, lemon, and the 1 teaspoon butter in a small saucepan. Simmer for about 5 minutes (or until chopped apple softens, if using fresh apple). 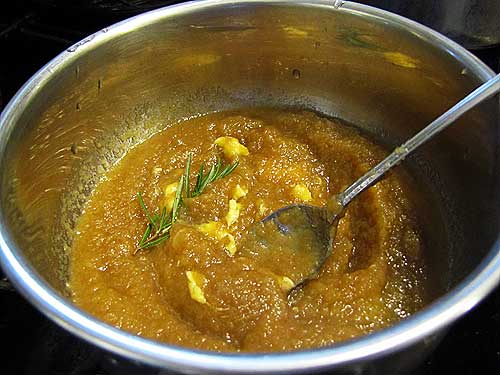 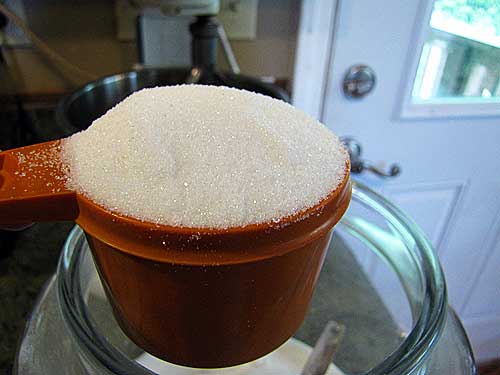 Mix well. (If not using fresh apple, you could do this whole thing with your mixer instead of using the food processor. I used my mixer.) 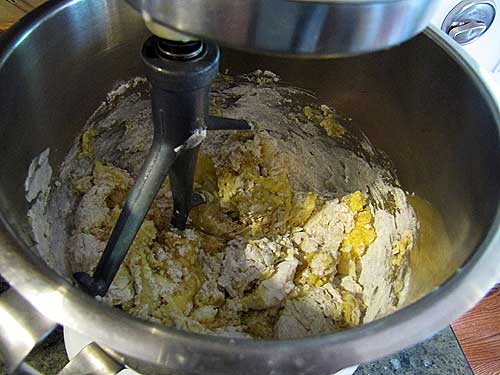 Grease and/or line a regular-size loaf pan. (I actually do both–I grease the pan but also line the bottom with a piece of parchment cut to fit. Cakes like this have a tendency to stick, and it makes it easier to get the cake out.) Transfer mixture to the loaf pan. Place the long sprig of rosemary down the center of the batter and press lightly. 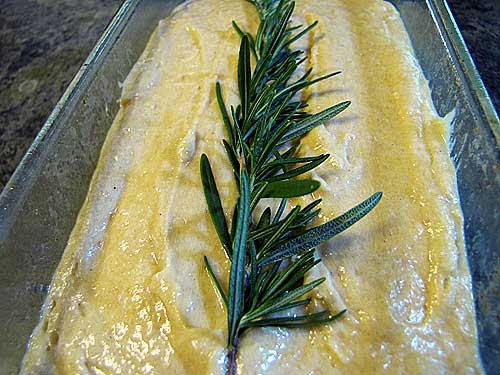 Bake in a preheated 350-degree oven for 50 minutes or until a toothpick comes out clean. (It only took 45 minutes for me.)

Note: I found that I needed to tent the top with foil in the last 15 minutes of baking to prevent over-browning.

Cool in pan on a wire rack before removing the cake.

Nigella says, “On baking, the rosemary sheds its oil to leave a scented path down the middle of the cake.” I have to admit, a sweet treat with rosemary sounds a little odd, but this cake is delicious. I love the scent of rosemary, and it pairs surprisingly well with the apple cake. (And not only does it taste good, it smells fantastic in the oven while it’s baking.) 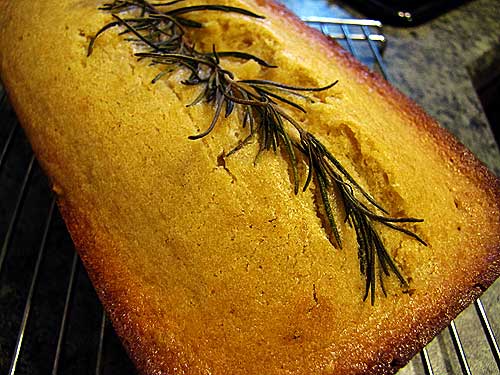 I also adore the idea of a remembrance cake in honor of someone that you love. Create your own–or try this one. It’s an unusual, moist, and not-too-sweet cake. And it has a neat presentation. I want to make it again sometime when we’re having company.

If you were going to create your own “remembrance cake” in honor of someone you loved, what would it be and who would it be for? If I made a remembrance cake for my mom, I think it would be Fruity Remembrance Cake. Because she was Miss Fruit Cake. She had fruit cake every year at Christmas, and SENT fruit cakes to other people. And nobody wanted them! (They weren’t homemade fruit cakes. It was some mail order fruit cake thing she loved.) I think I’m going to do that…. Come up with a homemade fruit cake recipe (that I like, cuz otherwise I’d have to give it to the goats) and call it Fruity Remembrance Cake!