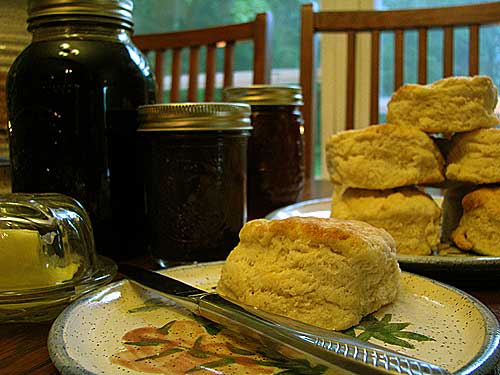 When I was growing up, Saturday mornings always meant biscuits with molasses. Homemade biscuits, of course. My mother was a biscuit maker. My biscuit mix is based on my mother’s biscuit recipe, which came from her mother before her.

In my Oklahoma grandmother’s farmhouse kitchen, there was a stand-alone cabinet with a big bin of flour over a sifter that was part of the cabinet. The flour bin held lots of flour, and even in Depression times, that was one thing farmers had in plenty. My grandfather would save wheat out of the harvest and take it to the mill to have it ground into flour. Because people were so poor, they would put it in printed materials instead of plain sacks.

In my mother’s words: “Sometimes Mama would go with Daddy to choose the prints and sometimes he’d do it himself. They were all so pretty, he couldn’t make a mistake. So Mama not only made the bread, but they grew the wheat for the flour and I had lots of pretty dresses to show for it. Mama would take me to town and we’d shop til I found a dress I liked, then we’d go home and Mama would cut out a pattern for it and make it.”

One of her fondest memories of her mother is of all those times she watched her work at that stand-alone kitchen cabinet making biscuits in the big wooden bread bowl that always stayed just below the sifter. When she was ready to make bread, she just turned the sifter handle and flour came down into the bowl.

“I can just see Mama making the biscuits, mixing mostly with her hands, then throwing a little flour on the dough board, cutting the biscuits out. When they were in the oven she pushed the mixing bowl back under the sifter and closed the door. Rarely did she wash the bowl so that the nest of flour was ready for the next time.”

Some of my fondest memories of my childhood are the same–my mother making biscuits. She didn’t have a stand-alone cabinet with a built-in sifter and a bowl always at the ready, but she might as well have since she made biscuits on a regular basis. You could always count on them on Saturday mornings. She’d poke the small end of a spoon or knife into the soft, still-warm-from-the-oven biscuits then pour molasses in the hole and that’s how we’d eat them. We always brought molasses back whenever we went to West Virginia. I can’t remember a time in my life that we didn’t have West Virginia molasses in the house. How would we eat biscuits without that?

It’s amazing how many memories are built around food. Food is basic but deep, simple but evocative.

Make something meaningful out of breakfast this weekend. Someday, somebody’s gonna remember what you fixed for them–make it yummy!

Here are a few of my favorites if you’re looking for ideas: