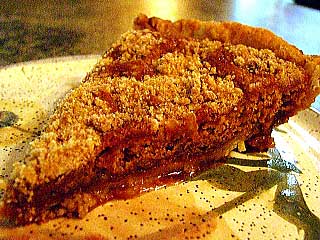 If you’ve been to a country church supper, you’ve probably been exposed to Shoo-Fly Pie even if you had no idea what it was. Or maybe that’s just me who was eating Shoo-Fly Pie for a couple years before I figured it out. It’s a charming, old-fashioned name for a pie, and it’s certainly one that never made an appearance in the kitchen of my childhood suburban home. And while you country people are laughing at me, I know some of the rest of you are saying, “What IS Shoo-Fly Pie?”

Shoo-Fly Pie is a molasses and brown sugar pie with a crumb topping. Its origins date back to treacle tarts in medieval Europe, but it gained popularity in America as settlers arrived with what staples could outlast a trip across the Atlantic by boat and intrepid cooks made do with what they had. Among these settlers were what became known as the Pennsylvania Dutch, who were major pie-lovers (like me! I am a PIE LOVER and why I don’t have Pennsylvania Dutch blood in my veins, I don’t know) and they continued to make do every late winter and early spring as food supplies ran low and Shoo-Fly Pie became their signature dish. Why it’s called Shoo-Fly Pie is debatable, but most likely because during Colonial times, baking was done outdoors and the sweet molasses filling bursting out of this pie attracted flies.

And whatever. It’s good pie!! My kids will eat it. In fact, I’m lucky if I get one slice, and I have all the ingredients on-hand all the time, no special trips to the store. Which, when you live in the boonies, is a major consideration. And, wow, don’t you just love the name of this pie? Can you live another day without getting to say you are baking a Shoo-Fly Pie?

Printer-Friendly
How to make Shoo-Fly Pie:

In a medium-size bowl, combine dark corn syrup, molasses, boiling water, and soda. Scoop out a 1/2 cup of the corn syrup and molasses mixture into a small bowl. Add egg and whisk together then dump back into larger bowl with the whole corn syrup/molasses mixture. To finish the filling, you’ll need to prepare the topping mixture. 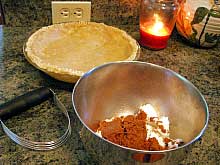 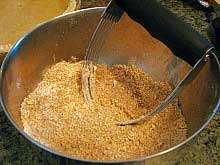 Pour corn syrup/molasses mixture into one unbaked single-crust Foolproof Pie Crust shell. Evenly sprinkle reserved crumbs on top. I get all obsessed trying to spread the crumbs out evenly on top of the pie. 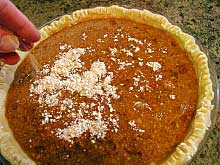 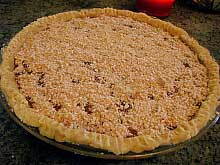 Bake on lowest oven rack in a preheated 400-degree oven for 25 minutes. Let cool to room temperature or chill it. Serve with whipped cream. 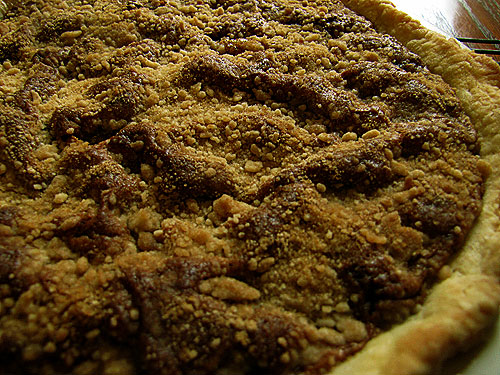