My daughter took a fixation with this song a while back. You can’t get it out of your head now, either, hunh? Sorry…..

What is short’nin’ bread? She wanted to know. So we researched it and discovered there is really not a lot of clear documentation, at least not that anyone agrees on, but there are a lot of theories that you can find proposed around the internet. (Which is a sometimes good, sometimes iffy, source of information.) What can be ruled out, with most accord, is any relation to the Scottish shortening bread, or shortbread. On the family tree of world recipes, shortbread is on a different branch, despite the similarity of the monikers. The “short’nin’ bread” song, also with its own plethora of variations and unknown original authorship, is an old plantation song glorifying a dish that was popular in the pre- and immediate post-Civil War era in the slave (and subsequently former slave) population, and the most common concurrence is that it was a simple fried cornmeal-based treat.

Sifting through the possibilities and historical perspective, I put together what I believe to be a suitably authentic reproduction recipe that marries both the ingredients that would have been available and the most basic understanding of the recipe’s concept–all with the notion of honoring the song and the population that created both the lyrics and the dish.

Three little babies lying in bed. Two was sick and the other ‘most dead. Sent for the doctor and the doctor said, “Give those babies some short’nin’ bread.”

Notice how simple the ingredients are–cornmeal, flour, salt, egg, baking powder, shortening, molasses, sugar, and water. Slaves would have used the least expensive grain available to them, which would most often be cornmeal, with the addition of some more refined flour in a smaller quantity if they had it. They either used baking soda or baking powder, but may have even made it at times without any leavening agent at all if it wasn’t available, sort of like a fried flatbread. The short’nin’ would have been lard, which they probably just called pig fat. They would have most ready access to some type of unrefined cane, such as molasses, for sweetener, but sugar isn’t entirely out of the question as an ingredient in times and places where it was available. Any sweetener at all is a debatable issue in this recipe as some quarters believe it to be a “poor man’s” cornbread, but the sense of the song tells another story–this was a treat. We’re thinking it was sweet! That, at least, is my theory, based on the song and its era and circumstances, and so is the direction I took when developing this recipe. Notice what the song is telling us. Children love it! SUGAR!! (Froot Loops, anyone?) It makes a man fall in love with a woman who knows how to make it. It’s worth going to jail over!

Printer-Friendly
How to make Short’nin’ Bread:

Set water on to boil in a pot while you combine the rest of the ingredients except for the reserved sugar and start your oil heating in a skillet. (Use approximately one-half inch oil and set to medium heat. I used vegetable oil.) Add the boiling water. You want a consistency similar to pancake batter, so add a bit more (or less) water if needed for your mixture. (The point of the boiling water is to melt the shortening in the batter. You might want to go ahead and boil a full cup so you have extra if needed to get your batter to the right consistency. Three-fourths cup boiling water works reliably for me.) Test a small dab in the skillet to make sure you’ve got it hot enough to cook quickly, but not so quickly it will burn before it cooks through or before you can turn it. Adjust your heat as necessary and taste-test the the fried dab. Sweeten to taste–add the 1/4 cup sugar if it’s not sweet enough for you. Or, add half the 1/4 cup sugar and fry another dab to test; add more sugar (or molasses if you prefer to avoid refined sugar) until you’re satisfied.

Fry pancake-size rounds of batter, a few minutes on each side, to a golden brown. Drain on a plate on a paper towel. 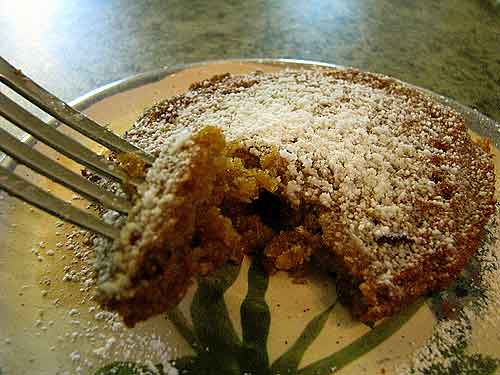 Serve immediately, warm, as a breakfast treat with a sprinkling of powdered sugar (similar to how you would serve funnel cake–the powdered sugar is entirely historically inaccurate and just for fun) and even additional syrup and fruit etc (as with pancakes). Or, serve as an easy dessert in a bowl with vanilla ice cream (again, not authentic, just a new way to serve an old-time taste). For the most authenticity, serve with no topping at all as a hand-held treat. It’s simply, fabulously delicious and surprisingly tender and almost cake-like (considering the lack of milk, the absence of which speaks to the frugality of the recipe). No wonder they made up songs about it! Though the whole going-to-jail thing over it might be overdone……..