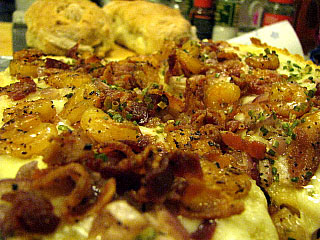 Last year, after a trip to Myrtle Beach with a friend, we detoured by Wilmington, North Carolina, on the way back and I had the most wonderful dish at a restaurant right on the water. I can’t remember what they called it, but it was basically strips of french bread pizza with olive oil, shrimp, peppers, and cheese. It was soooo delicious. I’ve been making french bread pizza for a long time, but I’d never made it with quite that combination before and I just loved it. Since then, it’s really become one of my favorite comfort foods. 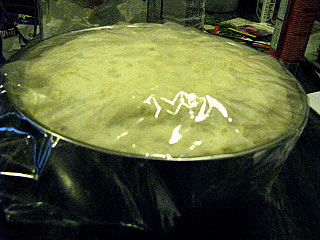 Now because I am such a bread-baking fanatic, I have to go on for a moment about the wonders of fresh-baked homemade french bread and how nothing can compare. I just wouldn’t be me if I didn’t say that and then you’d all be saying, “SUZANNE, what is wrong with you?” and you’d be disappointed. And of course it’s true and it’s so easy to make homemade bread and it’s soooo good.

But, I want to say that if you can’t, just can’t, bring yourself to make homemade french bread, you can buy some french bread and still make this recipe. And I won’t think anything bad about you, I promise.

I’m not going to give specific quantities here because it all depends on how many different ingredients you’re adding and how many loaves of french bread you’re using (not to mention the size of the loaves). On this occasion, I made three loaves of french bread. I have big kids who are big eaters! And they love french bread pizza. I started out by frying peppered bacon. When that was ready, I set it aside to drain while I sauteed some chopped onions, then drained that as well and sauteed some medium-sized shrimp. I cooked the shrimp a pretty good while to let it soak up the bacon and onion juices and develop a nice golden glaze.

Next, slice the french bread loaves in half horizontally. Drizzle olive oil and spread with a spoon or fork to get an even coverage. I like to sprinkle on some garlic powder at this point. Yum! Garlic gets me all excited….

Add shredded swiss cheese first, then layer on the onion, bacon, and shrimp. I wasn’t using any peppers this time, so I thought it needed some decorating. I threw on some dried chives for fun. Now bake in a 375-degree oven for about 15 minutes, slice into handy pieces, and you have a fabulously easy meal that looks and tastes like it came from a gourmet restaurant! 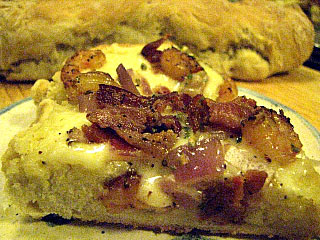 I like this in so many combinations. Mushroom, onion, and swiss. Bacon, onion, and swiss. Sausage. Ground beef. Peppers. (Notice I really love swiss cheese….but any cheese that is your favorite works, too.) For a different take, use a tomato-based sauce and make a more traditional french bread pizza with pepperoni slices and mozzarella. It’s all good! I could eat it every day, with Chocolate Lava Cakes for dessert! (Speaking of comfort food!! CHOCOLATE LAVA CAKES.)