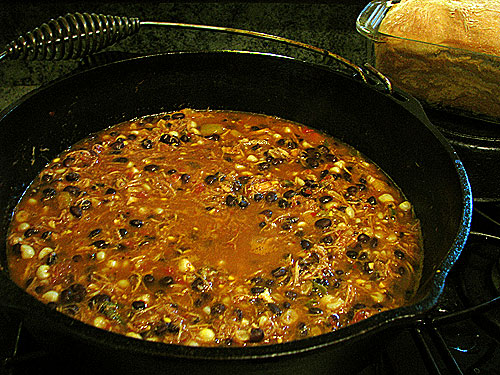 I spotted this stew here and it’s been calling to me ever since, waiting for the first really good chilly weekend to go simmering on my stovetop. Black beans, chicken, and corn make up one of my favorite flavor combinations, so I knew it’d be good. I had almost everything I needed and I didn’t want to go to the store, so I left out the cilantro. I also wanted to make a big, gigantic, huge pot to simmer away all weekend and let everyone eat at will while I flopped on the couch and ate bon-bons and watched TV, so I increased the recipe.

(I’m not really flopping on the couch eating bon-bons and watching TV this weekend. I wish! I’m picking pears and cutting up pumpkins and drying herbs. Which isn’t bad, either, now that I think about it.)

I super-sized the recipe to fill up my big cast iron kettle. I doubled or tripled some ingredients, but not others. When I make a big pot of stew, I go heavier on the beans than the meat. It’s cheaper that way and I have teenage boys to keep satisfied. (And shredded chicken spreads around in the stew really well, so it still seemed quite meaty.) I also didn’t have the chipotle chili salsa called for in the original recipe. Instead, I used chipotle chili powder and stuck with the tomatoes.

I used a quart of home-canned tomatoes. If you don’t have that, you can use an equal amount of store-canned tomatoes. (A quart is 32 ounces.) I used home-cooked (from dried) black beans–you can use a couple of cans of store-canned prepared beans, if you prefer. I used minced dried onions instead of a chopped onion to hide the onion from Morgan, and I added some sliced bell peppers and spiced it up with crushed red pepper flakes.

Put everything in a big pot and heat it up.

THESE ARE THE EASIEST DIRECTIONS I’VE EVER WRITTEN.

Okay, one more thing–you need some liquid to make the stew. I included all the liquid from the quart of tomatoes. I also included a small amount of cooking liquid from the beans, but not much, maybe about a cup. I added about 6 cups of water. This doesn’t have to be exact, just add enough liquid to get to a stew-like consistency.

I used a big cast iron kettle. You could also simmer this all day in a crock pot. And, of course, you need some grandma bread or cornbread.