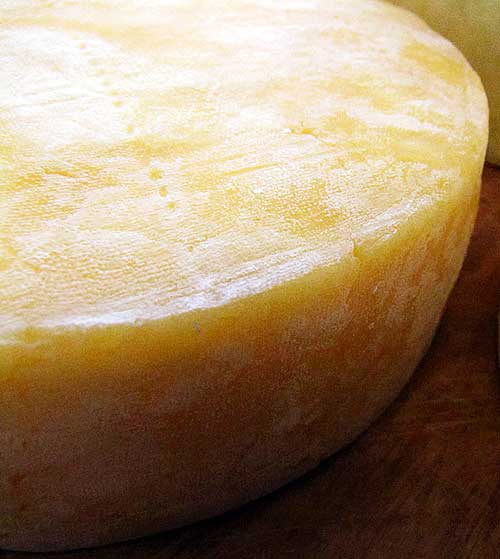 Cheddar is one of the most popular cheeses in the world, with a long history going back to the Cheddar caves in England, where it was known as the cheese of kings. Cheddar can be made anywhere, though–it is a process, not a place, and the traditional process involves cheddaring, in which the drained curds are allowed to coagulate into one mass and are then cut into slices, stacked, turned several times, then broken up into smaller pieces (milled). This is a little extra effort, and many store-bought cheddars today aren’t made this way. They are made by a short-cut process often known as stirred-curd cheddar, which is also a perfect alternative for the new cheesemaker wanting to try their hand at cheddar with a little less fuss.

The natural color of cheddar cheese is a creamy off-white, but it is traditionally colored with annatto, a vegetable dye, which lends the rich orange we expect from certain cheeses. It has no effect on the taste of the cheese, so you can leave it out if you prefer, but it’s kind of fun to use, especially the first time you see your cheese suddenly look like cheese from the store. (Look, it’s orange!) Like you did a trick. And you did! You made cheese!

I made quite a bit of traditional cheddar last summer, with mixed results. Now that I’m tackling my cheese challenge for New England Cheesemaking one cheese at a time, I decided to re-tackle cheddar, starting with the easier version first. Why didn’t I think of that before? (I do do things the hard way!) 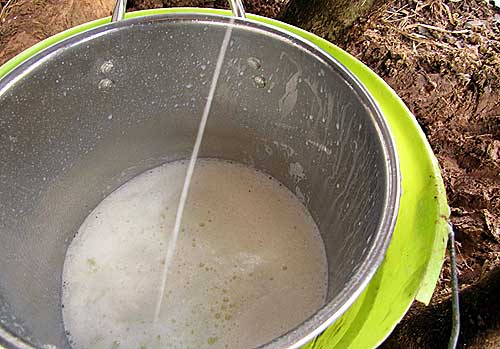 If using store-bought pasteurized milk, for a two gallon recipe, you may want/need to add 1/4 teaspoon calcium chloride diluted in 1/4 cup cool water while heating the milk in Step 1. This will help the curds to set properly. See more about milk for cheesemaking here.

My cow, Beulah Petunia. She loves me. Sorta. 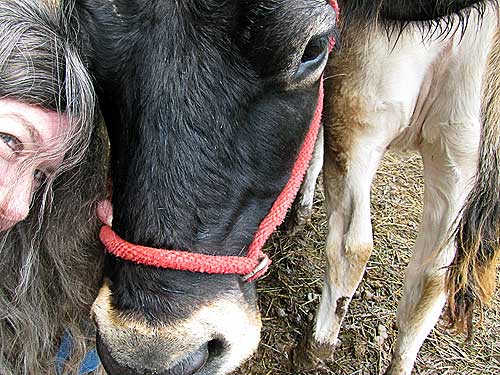 Glory Bee, my up-and-coming milker. I’ve been trying to get her to take a marshmallow from me for weeks. 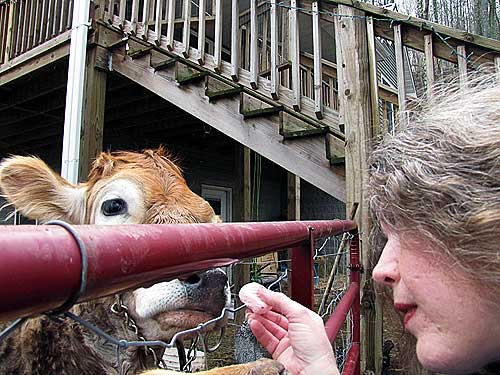 I think she thinks I’m trying to poison her. She’s very suspicious. 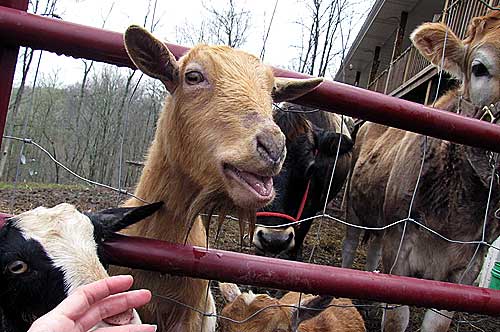 You can use goat milk in the stirred-curd cheddar recipe in this post! 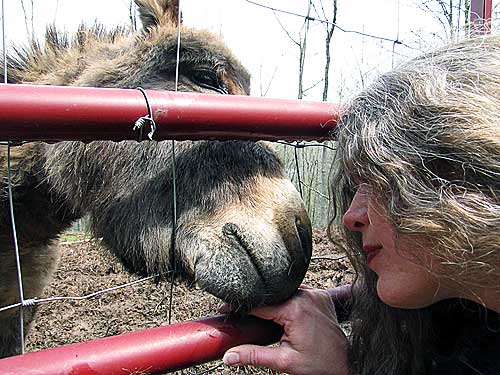 She’ll take a marshmallow any time. 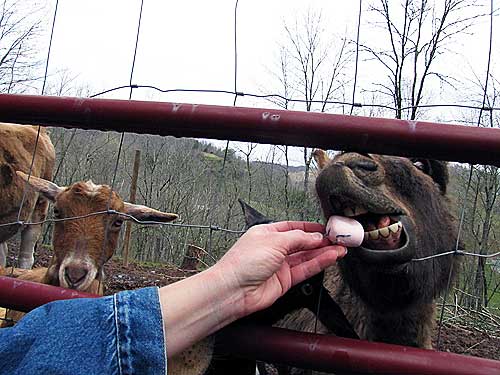 Did you know that donkey milk is good for you? People with allergies to cow milk can drink donkey milk, and it’s growing in popularity in some European countries.

I don’t think so on the donkey milk. I don’t have any cow milk allergies anyway. Whew. Would you drink donkey milk? I have to know.

The following recipe is from Ricki Carroll’s Home Cheese Making. You can use the same directions for either cow or goat milk. (I don’t know about the donkey milk.)

Printer-Friendly
How to make Stirred-Curd Cheddar:

Step 1. Heat the milk to 90-F. Add the starter and stir well. Cover and allow the milk to ripen for 45 minutes. 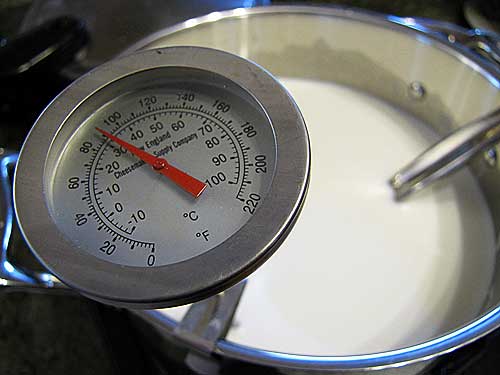 Step 2. For cheese coloring, use 2 drops per gallon of milk–4 drops total–diluted in 1/4 cup of cool water. 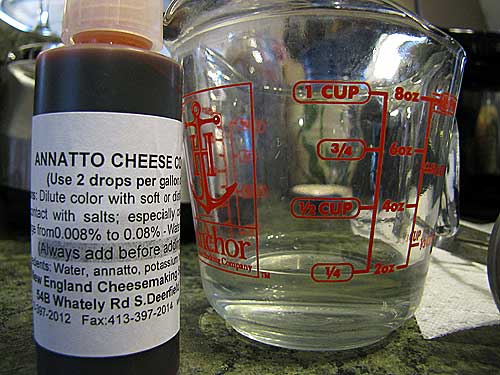 Add the coloring to the milk and stir well to distribute evenly. 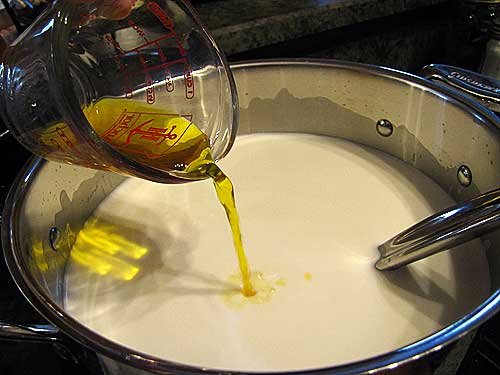 Cheese coloring must be added before the rennet, and stirred in well as it can destroy the coagulating ability of the rennet. If you find later that you forgot to add the coloring, forget it. You can’t add it later. Make white cheddar.

Also, be careful with how much coloring you add! Don’t get carried away. When you put the coloring in, it will look like it didn’t even make a difference. There’s still a lot of water in the milk. You’ll really only see the result of the coloring after the cheese is pressed. The color comes out more and deepens as the cheese air dries in the first few days following pressing. Follow recipe guidelines for adding cheese coloring. If you make cheese while you’re drinking and forget you put the coloring in then add more, you’ll end up with clown cheese! Don’t make cheese while you’re drinking!!

When diluting the rennet, don’t use the same container you used to dilute the coloring. 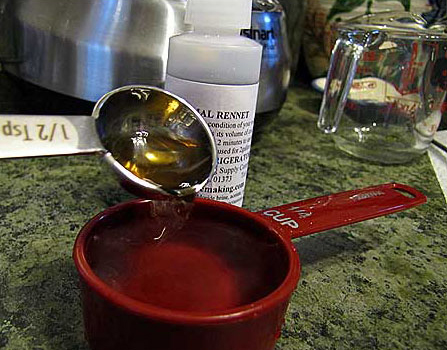 Step 3. Make sure the milk’s temperature is 90. Add the diluted rennet and stir gently with an up-and-down motion for 1 minute. If using farm-fresh milk, top-stir for several minutes longer. Cover and allow to set at 90 for 45 minutes, or until the curd is firm and gives a clean break. 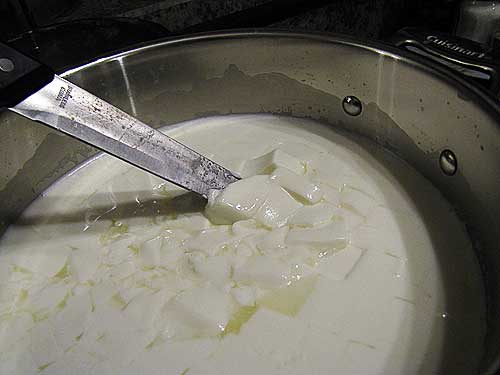 Step 5. Heat the curds to 100 degrees, increasing the temperature no more than two degrees every 5 minutes. This should take about 30 minutes. Stir gently to keep the curds from matting.

Step 6. Once the curds reach 100, maintain the temperature and continue stirring for 30 minutes. Let set for 5 minutes.

Step 7. Drain off the whey. Pour the curds into a large colander and drain for several minutes. Do not drain too long, or the curds will mat. Pour the curds back into the pot and stir them briskly with your fingers, separating any curd particles that have matted.

Step 8. Add the salt and blend well. Do not squeeze the curds; simply mix the salt into them.

Step 9. Keep the curds at 100 for 1 hour, stirring every 5 minutes to avoid matting. The curds can be kept at 100 by resting the cheese pot in a sink or bowl full of 100-degree water.

Step 10. Line a 2-pound cheese mold with cheesecloth. Place the curds in the mold. Press the cheese at 15 pounds of pressure for 10 minutes.

I’ve taken to using disposable cheesecloth. It’s so much easier. 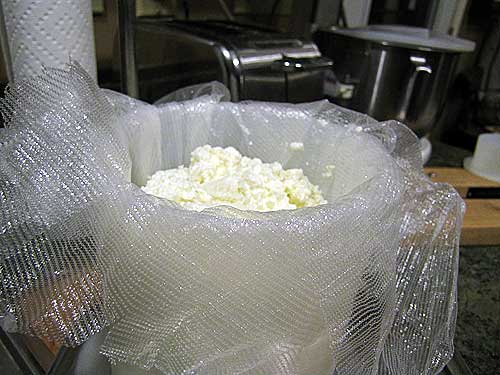 Step 11. Remove the cheese from the mold and gently peel away the cheesecloth. Turn over the cheese, re-dress it, and press at 30 pounds of pressure for 10 minutes.

Step 12. Repeat the process but press at 40 pounds of pressure for 2 hours. 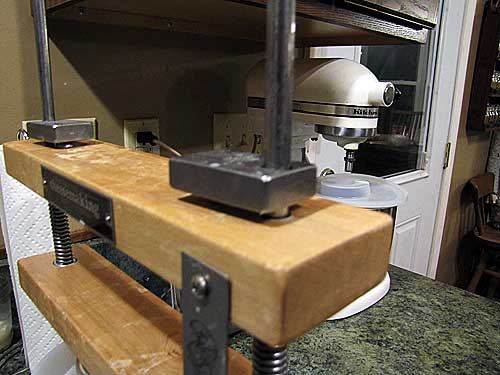 Step 13. Repeat the process but press at 50 pounds of pressure for 24 hours.

Step 14. Remove the cheese from the mold and peel away the cheesecloth. Air-dry at room temperature for 2-5 days, or until the cheese is dry to the touch. 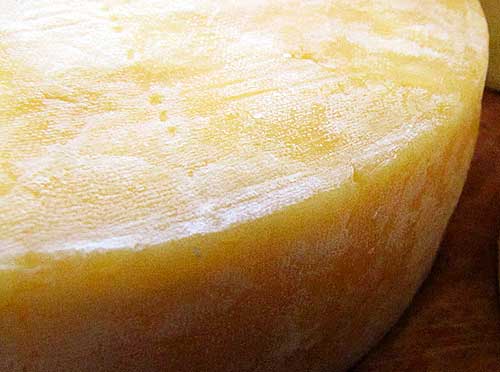 In some ways, it’s easier to “wax it and forget it” but I do prefer the looks of the unwaxed cheeses. They take some extra tending, though.

The cheeses I don’t wax develop a natural white bloom that brushes right off. 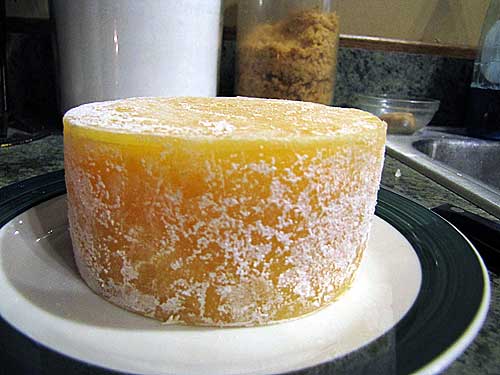 According to cheesemaking expert Jim Wallace of New England Cheesemaking, “The white mold is absolutely okay and can easily be wiped down with a dry brush or cloth or with a brine-soaked cloth. Cheddar is not normally made with a natural rind because of the dry curds at molding. It is usually waxed or cloth bandaged and the mold problem then disappears.”

Here’s a hunk cut off, going into my handy dandy food processor. 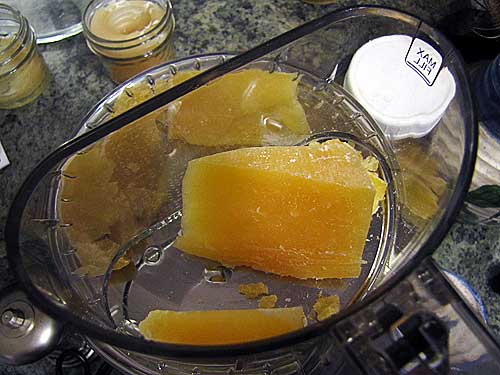 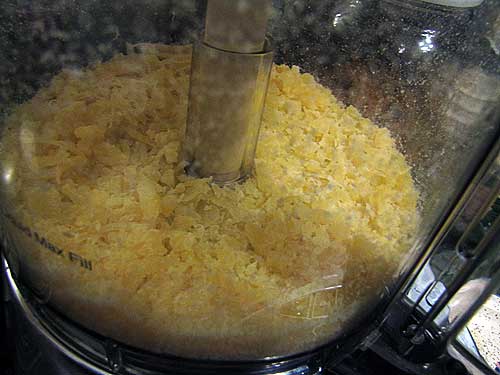 And melted on top of black bean burgers. 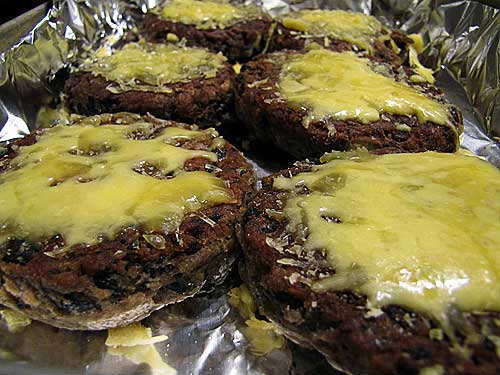 See how to make a homemade cheese press here. The spring-loaded press I use now can be found here.

See how I made my cheese cave here.

See all my posts in Cheesemaking here.

I get my supplies here.

This is my cow.

For a chance to win: Leave a comment on this post and let me know you want it. ONE winner will be drawn by random comment number to receive the package. Eligible entry cut-off is midnight Eastern (U.S.) time tomorrow night (April 16). This post will be updated with the winner by 9 a.m. Eastern (U.S.) time on Sunday (April 17). Return to this post to claim your prize!

UPDATE 04/17/11: The winning comment number, drawn by random.org, is comment #253, Phillis McLaren. Email me at [email protected] with your address for shipping!