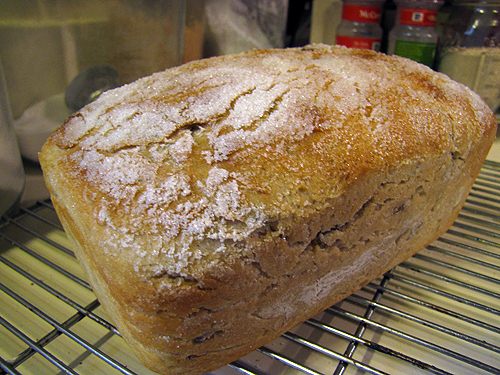 I made this loaf for my neighbor recently–it’s a raisin bread made with golden raisins and chopped walnuts. (The recipe is here. The way I made it pictured above varies in that I also added the chopped walnuts, about half a cup.) It made a very pretty loaf! I brushed some melted butter on the top and sprinkled it quite liberally with sugar during the last 5-10 minutes of baking.

Recently someone left a comment asking if I had any bread recipes. DO I HAVE ANY BREAD RECIPES? After I got done convulsing (ha), I realized it was probably time to post a recap about bread. I’ve posted more recipes about bread than anything else except maybe chickens. And goats. And some type of whining. Okay, so anyway!

I never buy bread. I’ve tried to teach all of my kids to make bread, though (and this isn’t being sexist here, just the facts) my boys haven’t been that interested. I taught Ross how to make bread when he was younger, but I probably would need a shotgun and some ammunition to get him to make any now. However, his fiance is interested in learning to make bread. Ross wants homemade bread, you see, he just doesn’t want to make it. Morgan isn’t an avid bread baker either, but she will and does bake on occasion. She’s continued to make it often enough that she remembers how, and if she needs help, she pulls up my website. Most often, she’ll make bread for pizza when she has friends over to spend the night.

Over the holiday break, I was surprised when Weston asked me to teach him how to make bread. 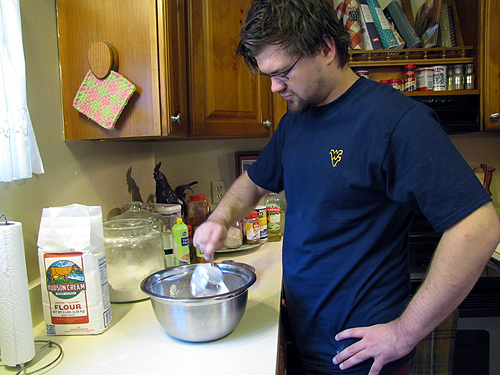 I taught him to make bread a long time ago, but he’d forgotten, and while home, he remembered how much he likes homemade bread again.

The recipe I use is a simple so-called “light bread” (an old-fashioned term referring to a yeast-risen bread as opposed to a quick bread) that has been handed down in my family. Read all about the family history behind this bread recipe here. You can be a Keeper of the Bread, too!

Never baked homemade bread before? I have an old post where I was teaching Morgan to make bread. She looks so cute–she was nine in the photos. Learn how to make bread with a nine-year-old here.

I’ve always felt as if one of the most meaningful things I’ve been able to do with my website is teach people to make bread. Homemade bread sounds like such a simple, trivial thing when you put it up against all the troubles and challenges of the world. But, you know, most of us can’t do a whole lot about the troubles and challenges of the world. All we can effect is our own world, the people near us, and most especially, the people in our own homes. Bread is a very fundamental sort of thing. It’s love, comfort, nothing and everything.

And it’s very good hot from the oven with butter!