I’ve been working on an article for the Charleston Daily Mail on various ways of preserving tomatoes, which brought me back to my issues with dehydrating tomatoes. I’ve had trouble in the past with stickage. (Is, too, a word!) The tomatoes stick to the dehydrator trays. I took my sticky issue to the Chickens in the Road forum to ask for tips. In the meantime, I tried placing the tomatoes on parchment paper in the dehydrator and that worked for me. No sticking! To see the other ideas offered up by forum members, check out the tips here and maybe you’ll find something that works for you!

Dehydrating is a great way to “get rid of” tomatoes when you don’t have time to can it all and your garden is throwing tomatoes at you with a vengeance. True sun-dried tomatoes in the sun aren’t feasible for most of us in our climates and conditions, but a dehydrator or an oven work as alternatives. For best results, use paste tomatoes, such as Roma. You can use other varieties, but they may take longer to dehydrate due to higher water content. The recommended method is to wash, dip in boiling water for 30 seconds, then dip in cold water to remove skins. Blanching and peeling are optional, though, as is removing the seeds. If you prefer not to do this, skip those steps. Core the tomatoes and slice thin. Dry at 145 degrees in a dehydrator or oven until done to your satisfaction, depending on your intended use. To store dried on the shelf, and to be dry enough to powder to make homemade tomato paste, they should be crisp. If you intend to soak them in olive oil or use them in baking (such as sun-dried tomato bread), you may only want to dry until they reach a leathery texture. Store tomatoes dried this way in the freezer.

Printer-Friendly
How to make “Sun-Dried” Tomatoes in Oil:

To make your own “sun-dried” tomatoes in oil, simply place pieces of dried tomatoes in a jar with olive oil, garlic, and a mix of herbs such as basil, thyme, and oregano. 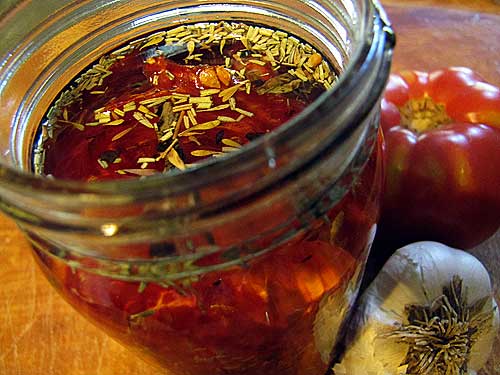 Make small jars you intend to use within a week and keep the tomatoes in oil in the fridge.

I came up with this Grandmother Bread recipe using my “sun-dried” tomatoes. 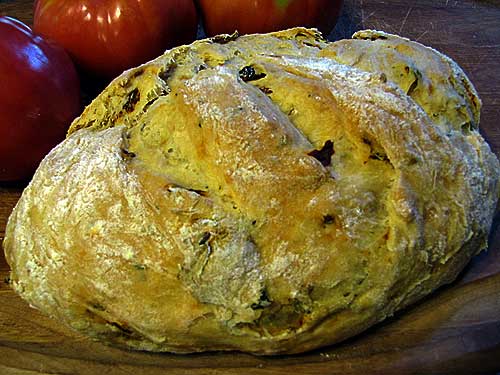 How to make Sun-Dried Tomato Bread:

Note: If using tomatoes in olive oil with herbs and garlic, use the flavored oil from the jar and reduce the garlic and herbs as you will have some of those mixed in with the oil.

In a large bowl, combine water, yeast, sugar, and salt. Let sit five minutes. Add the tomatoes, oil, garlic, and herbs. Stir in the first cup of flour with a heavy spoon. Add the next cup of flour a little at a time as needed, stirring until dough becomes too stiff to continue stirring easily. Add a little more flour and begin kneading. The amount of flour is approximate–your mileage may vary! Continue adding flour and kneading until the dough is smooth and elastic. Let dough rise in a greased, covered bowl until doubled. (Usually, about an hour.) Uncover bowl; sprinkle in a little more flour and knead again. With floured hands, shape dough into a free-form loaf and place on a greased baking sheet. Cover and let rise again. Bake 25-30 minutes at 350-degrees.

See these recipes at Farm Bell Recipes for the handy print page and to save them to your recipe box:
“Sun-Dried” Tomatoes in Oil
Sun-Dried Tomato Bread

And by the way, seriously, do people actually try recipes before writing them???? I’ve been hankering to try this Roasted Roma Tomatoes recipe I found in the Ball Blue Book. After roasting the tomatoes, the recipe instructs: “Place roasted tomatoes in a paper bag and close tightly.” I roasted the tomatoes outside on the grill. 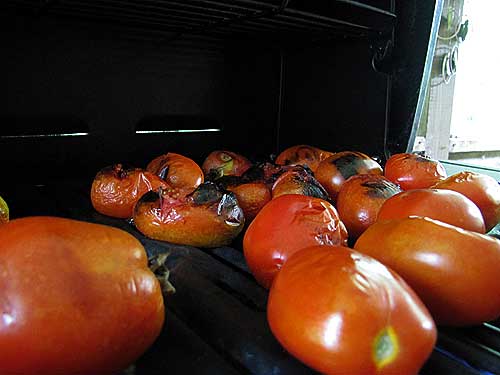 When they were done, I started placing them in paper bags. When I picked the paper bags up off the counter to the side of the grill to carry them inside, THE BOTTOMS FELL OUT OF THE BAGS. Okay, maybe I should have thought of this issue. Maybe nobody would ever do this but me? But I was pretty upset about the loss of those Romas that fell splat on the porch floor (which was none too clean). I cried. And then I carried on, roasted some more, and completed the recipe. However. I have now made a note on the recipe at Farm Bell Recipes so anyone else who tries the recipe won’t have this happen to them!