Old cookbooks are one of the things that perpetually hold my interest. They aren’t just a source of old-time recipes that have been weeded out of today’s cookbooks (like burnt sugar cake), but also a tiptoe through a different era and its unique views on society. I was recently gifted with a copy of The Modern Family Cook Book written by Meta Given from one of the attendees at the recent retreat. (Thank you, Connie!) There are a few pages torn out from the front of the book, including the copyright page, so my best source of dating is the foreword, which is dated January 1, 1942, along with the start of said foreword. This cookbook was released in the midst of World War II. “Feeding the family has always been a matter of supreme interest to the individual; now, in the present emergency, it is a matter of national concern.” Feeding your family properly was patriotic.

This cookbook doesn’t include just recipes, though. It includes meal plans for every day of the year. That’s right, 365 meal plans. “Think of the hours of time and the brain-rackings this will save you!”

Sometimes forewords are the most entertaining parts of old cookbooks because that’s where many of the juicy societal observations can be found. The menus are planned for a family of five, and in 1940s pricing, that was estimated at $12 to $14 in grocery costs per week if the plans were followed strictly. The perspective of the book is described as seeking the middle ground between “slavish” adherence to “modern” diet notions and “the cheerful heedlessness of the old woman who’d ruther eat what she’d ruther.” (Which explains why cookbooks older than the 1940s are even more fun.)

Each section opens with a detailed tutorial on the basics of whatever the topic is–breads, pie crusts, cakes, even an entire section on measurements. Its existence in this 1940s cookbook plays commentary to the fact that this was a time when people were beginning to move away in droves from rural environments to more urban and suburban locations, spreading out families and taking away the natural “teaching kitchen” of older family members mentoring the younger ones as they took on their own households. Young women needed a book to tell them how to do things. And this book is absolutely directed at women, without any sense of sexism or shame. “This book is written for you, Mrs. Homemaker,” the introduction states. (Yep, she’s married, too. Single girls don’t need this book–they’re supposed to be living at home with their parents!) And being a great cook is, with no equivocation, “the grand climax” of a woman’s achievements in life. “Every woman should feel herself to be a hostess to her family.” There is even a meal planner’s creed at the beginning of the book. The meal plans themselves are quite detailed. Here is a typical meal plan:

Breakfast–orange juice, prepared cereal with “top milk” (they were getting milk deliveries at the door in those days, and there would be cream at the top), toast with butter, jelly, coffee for adults, cocoa for children. 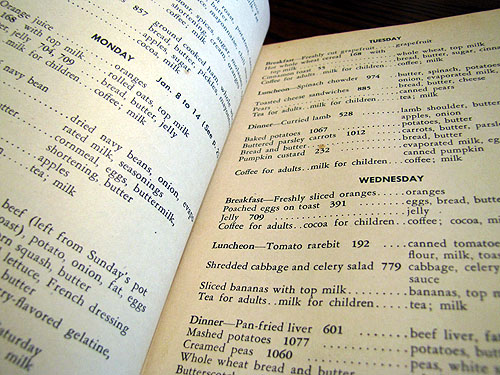 The meals are geared to a family of five, so I’m left wondering what happens to the leftover pie. The next day’s dessert is chocolate blanc mange. Every dinner comes with dessert (all the meal plans note the accompanying recipe and its page number where it can be found), but as the introduction stated, this book was for the homemaker. She had time to make dessert every night. Hostessing to her family was her full-time job.

She was probably sneaking pieces of leftover pie when she was doing the dishes. And maybe some sherry she kept under the sink, but that’s not in the meal plans so let’s not mention it. 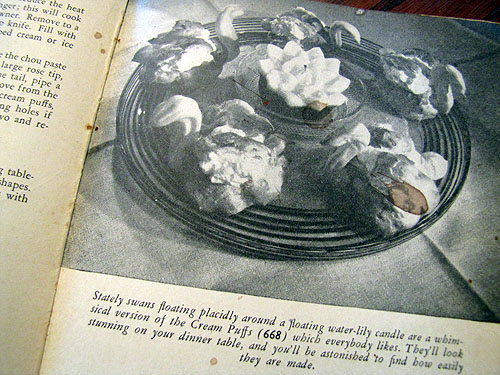 Recipes include such concoctions as Swan Cream Puffs (pictured around a floating water-lily candle), Jellied Tomato Bouillon, Veal and Vegetable Pie, plus tips like how to create butter roses and butter curls. There’s a whole section on canning. Most of the recipes direct to seal with paraffin wax. There are, of course, still the more old-fashioned country staples to be found, such as pan-fried summer squash, apple sauce cake, and baking powder biscuits.

Overall, as stated in the foreword, this book is indeed sandwiched between that cheerful old woman who’d ruther eat what she’d ruther and used her lard accordingly and the coming new age of more diet-conscious recipes, though perhaps in more and different ways than the writer of the foreword could understand without the perspective of time. And, while the writer of this book may not have understood the entirety of her own social commentary, she did know that she was making one–which is one of the more sophisticated nuances in the book and in stark contrast to some of its accompanying unconscious sexism. “Philosophers, poets, and economists may smile at the idea of eating as a social force. But if this is a trifle, it is one of those tremendous trifles which help to shape the destiny of the family, even of the whole of society.”

I’ve always thought food was important, and the glimpse of how food was important and why in previous eras has long fascinated me, along with the question of what we’re saying about food today. Even as food becomes ever more convenient in packaged food products and fast restaurants, there’s also a revival of interest in home cooking. I see food prepared at home, from scratch, as a touchstone, a source of grounding, in our ever advancing society. But a walk through The Modern Family Cook Book of 1942 reminds me that my vision is as clouded as its author. Only the perspective of time will tell what we are really saying about food today and its relation to society. 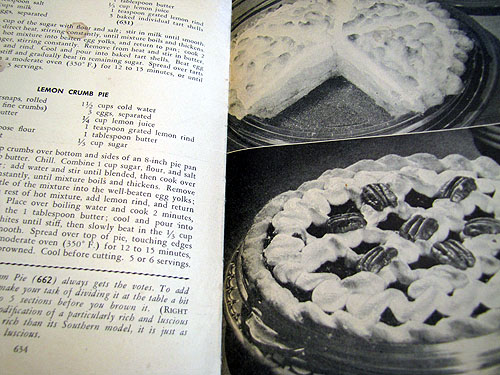 But for the record, pie fixes everything.