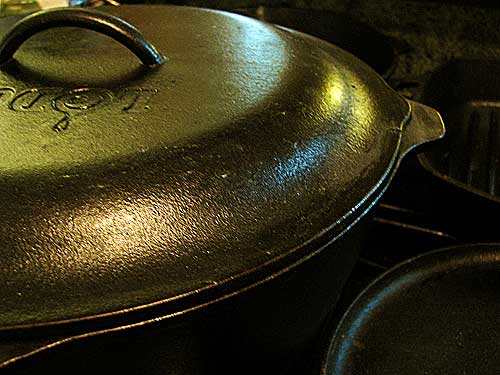 Cast iron in the kitchen is a country staple. It’s homey and old-fashioned and just plain good for you. I cook with cast iron a lot–and I get a lot of questions about caring for cast iron. I think, sometimes, people are a bit afraid of it. (I understand. I used to feel that way, too.) Often, the people I hear from have come into some old cast iron and don’t know what to do with it. It’s rusty or covered with some bumpy, black stuff. The reason there’s so much old cast iron around is because it pretty much lasts forever. There’s nothing wrong with using old cast iron. In fact, it’s even better! It’s got history.

Once you understand how to take care of your cast iron (old–and new!), it’s a very simple routine.

Printer-Friendly
How to remove bumpy, black stuff from cast iron:
Run the pan through a cycle in your self-cleaning oven or place it directly over a campfire for 30 minutes. The icky stuff will turn to ash and flake off. Follow with scrubbing and washing. (Let the pan cool first.)

How to remove rust from cast iron:
An everyday scouring pad will handle minor rust. If you’ve got major rust, you can use steel wool, too. (Scouring rusty cast iron is a good job for children who are in trouble.) Follow with scrubbing and washing.

This little skillet hasn’t been used in a while and has some minor rust. 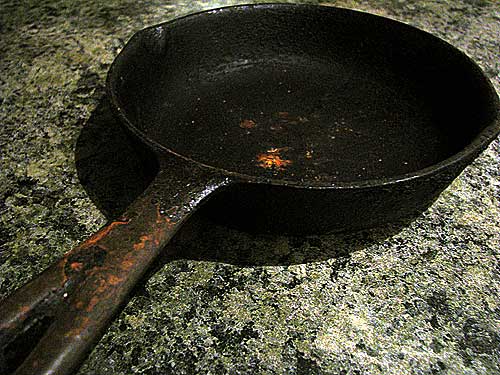 How to scrub and wash cast iron:
Use a scouring pad and warm, soapy water. Dry the pan thoroughly before seasoning. (You can put it in your oven for a few minutes to make sure it’s dry.) 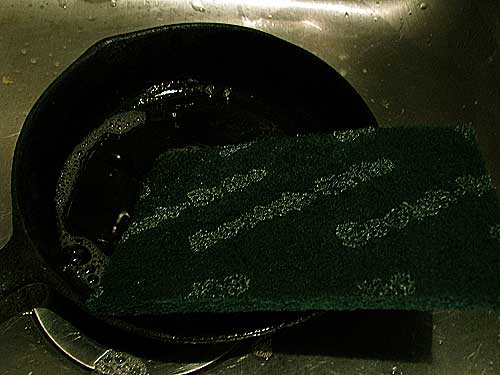 My little skillet, rust all gone, scrubbed, washed, and dried. Ready for seasoning. 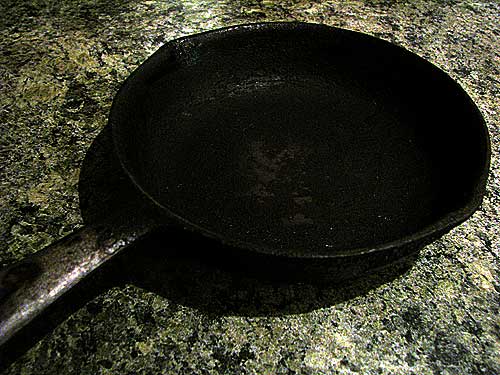 How to season cast iron:
Use a paper towel and coat the pan with some kind of oil/fat, all over, inside and out. Use lard, bacon fat, shortening, or vegetable oil. (I use lard.) 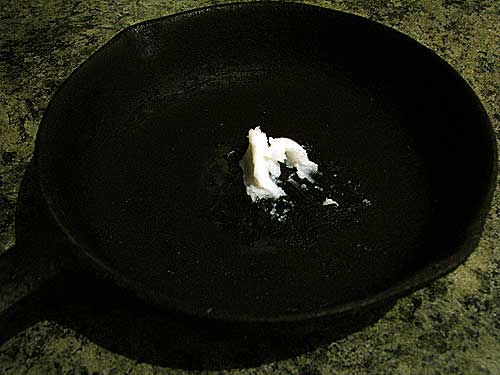 Place the pan upside down on the rack in your oven. Put another pan beneath it to catch any excess drippings. Keep it in the oven at 350-degrees for one hour, then turn the oven off and wait for the pan to cool. That’s it! 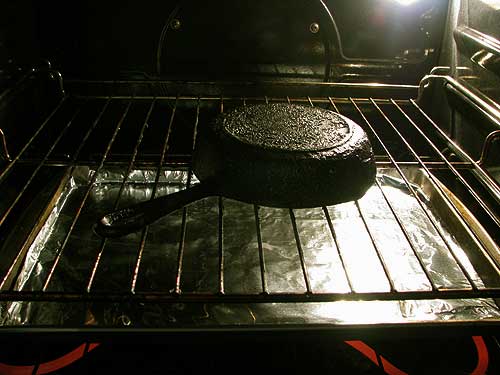 You can repeat the seasoning process two or three times in a row for an old pan you’ve just restored, or a new pan that needs a good first-time seasoning. (Always season new cast iron after you buy it.) Seasoning keeps cast iron conditioned and also gives it a stick-resistant finish.

Everyday cleaning of cast iron:
For daily purposes, a properly seasoned cast iron pan cleans out easily. Depending on what you’ve been cooking and how much of a mess you’ve made, sometimes you can just wipe it out. Other times you may need to get a butter knife and scrape it out if anything is sticking. If you need to, you may rinse it out with water, dry, then put a dab of oil on the inside and wipe it around. If you use soap to wash it, you should season it afterwards. Otherwise, just season regularly, every few weeks or months, depending on how often you use it. For a pan you use on a daily basis, the more often you season it, the easier it will be to clean, so it’s worth the trouble. (And it’s really not that much trouble. Though I will freely admit that I don’t season my favorite skillet every single time I use soap to clean it. I’m probably going to cook bacon in it–tomorrow–so I don’t worry about it. I just season it regularly to keep it in shape.)

This cast iron skillet is my favorite pan. I use it almost every day. 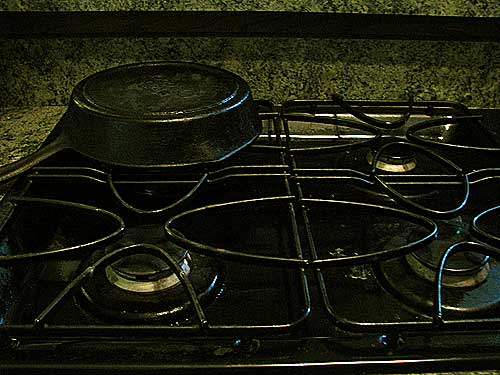 When I’m not cooking with it, I keep it turned upside down on the back burner of my stovetop. There’s no point putting it away.

Cooking with cast iron is a beautiful thing–so if you’re buying new cast iron, or have come into some old cast iron–don’t be afraid to use it! Take care of your new cast iron and you’ll be handing it down to your children, and restore your old cast iron–it can be done and it’s not that difficult. Cast iron cooks more evenly than most other types of pans. It’s irreplaceable for making flour tortillas as it can withstand high heat in a dry pan. Seasoned well, cast iron is nearly non-stick. Food really does taste better cooked in cast iron and an added health benefit is that it will actually absorb some of the iron. 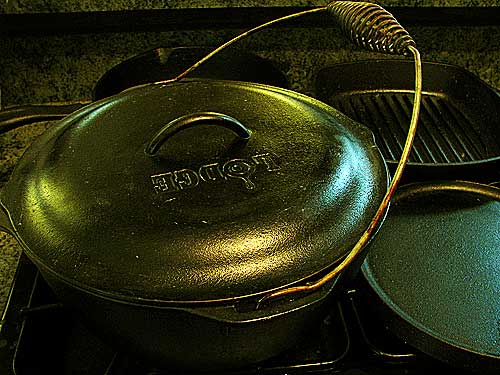 Note: Do not use cast iron on a glass stovetop without checking your manufacturer manual. This particularly applies to pans with a raised ring (such as my favorite skillet, above). Depending on your manufacturer, if your glass top is damaged while using cast iron, you may void your warranty. Cast iron may also cause breakage or scratching on glass stovetops.