When I was nine years old, my mother taught me to make the bread. I made bread periodically as a teenager–it wasn’t “my job” like it was my grandmother’s job. We mostly bought bread at the store, but whenever anyone in the house made that bread, everyone was excited and it went quickly.

When I set up housekeeping for the first time as an adult, among the first things I bought were bread pans and a bag of flour. I had never been in charge of grocery shopping before, so I didn’t really think too hard about how long flour could last and how much flour is really needed to make just a loaf or two of bread. I bought a 25-pound bag of flour. That bag of flour lasted a long time! But I made a lot of bread, trying to use up that 25-pound bag, and I fell in love with baking.

I have two sons, and yes, of course, we can and should teach our sons their way around a kitchen, but there is just something about a bread recipe that has been passed down from mother to daughter for a hundred years or more in my family that makes it special that I have a daughter.

She looked a little doubtful at the prospect of actually remembering a recipe for that long, then she said, “Are you sure you’re the right person to teach me how to make bread? Aren’t you the one who blew up the bread pan??” Okay, yes, that did happen. It was an oven malfunction, I swear! The oven got too hot one day due to a temperature problem with the thermostat and when I took the pan out, the glass bread pan exploded everywhere and I was finding tiny bits of glass in corners for weeks. I reminded her that I’d made hundreds, maybe thousands of loaves of bread over the years and had only blown up one pan.

So we got started and I had her doing every step on her own, me just watching. She started stirring in the flour and she was getting a little tired of stirring and she said, “Don’t we have electronics for this now?” Well, yes, in fact I did have a bread machine once. It was a gift, and I tried it out a few times, but it’s just not homemade bread if it isn’t made by hand, and I have no idea where that bread machine is now. 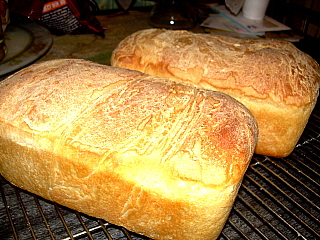 Making bread from scratch without using a bread machine takes some effort, but there are several benefits–for one thing, kneading bread is great exercise and good stress relief–but more importantly, putting your fist into the dough is like touching the past. People, particularly women, have done this very thing, stuck their fists into dough and kneaded it to a perfect elastic ball, for thousands of years. My mother, my grandmother, my great-grandmother, and my great-great-grandmother made this bread, stuck their fists into this dough. There are few things left in this sophisticated day and age that are more elemental, more intrinsic to human existence, more real, than making bread. 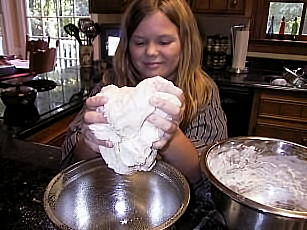 I explained all of this to my daughter, and her eyes glazed over slightly, then I pointed out, “You are the only granddaughter, remember? That makes you the Keeper of the Bread.” Now that made sense to her, and suddenly she was very proud. And once she got into it, she thought kneading was fun. All that punching, you know. Her first batch of bread turned out great, and she couldn’t stop reminding her brothers that she’d made it, all by herself, and to this day, she is proud to make what she named Grandmother Bread. The recipe is a longtime family secret, passed from hand to hand, never written down, but you can find it here. In a world where baking homemade bread is a dying art, maybe you can be a Keeper of the Bread, too. And if you’ve never made homemade bread, learn how to make bread with a nine-year-old.