Back in the day, nearly everyone had a family cow. Even in town. They kept old Bessie back behind the house with the chickens. These days, even in the country, it’s not very common. Family cows have gone the way of vinyl records–quaint, interesting, over-sized, and cumbersome to keep not to mention too much trouble. It’s much easier to pull a plastic jug off the refrigerated shelves at Walmart for three or four dollars a gallon and drop it in the cart. Of course, something is lost in that convenience. That convenient milk is ultra pasteurized for longterm shelf stability, trucked across the country from mass dairies and mega milk processing plants. That milk is dead, all its natural flavor and nutrition deleted and replaced with synthetic vitamin fortification and a cardboard taste that makes you want to throw some sugar on your cereal so you can’t taste it. You can’t make cheese or butter from it–all the natural enzymes that make milk so magical have been processed out of it. Further, the connection to where the milk even came from is long gone by the time it hits the store shelves.

Raw milk is natural, unprocessed, untreated milk, the way it comes out of the cow. Milk from the store is not even close to it. Store-bought milk is a chemically altered substance that may include residual drugs (such as bovine growth hormone), with all the beneficial naturally occurring enzymes and bacteria destroyed. Raw milk from pasture-raised cows is in a completely different league. It’s a complex whole food packed with naturally occurring vitamins and enzymes plus minerals and other trace elements that can do everything from fight cancer to help prevent cardiovascular disease and decrease allergies.

You’d think they’d sell it at the store! Think of the price tag they could put on that!

Yeah, well, I’ve been thinking about that price tag, because for the small farmer, the price of milk is barely about making a profit, it’s just about trying to survive and not operate at a loss as West Virginia legalizes raw milk distribution from small farms via herd shares. The law went into effect last month (May 2016). The small farmer is not a mass dairy or a mega milk processing plant.

Of course, there’s been a longtime milk underground in West Virginia. It’s not like raw milk sales are anything new, they’re just legal now. The going rate for black market raw milk in this state is $5/gallon. The risk to the farmer is huge–if they’re caught, their farm could be raided, their cows confiscated (seriously), and they could face fines and other penalties. But, assuming they’re not caught, there’s no extra cost on them to sell a gallon or two here and there that they don’t need on their table. Most black market farmers operate on a very small scale, selling within a small circle of friends and family they can trust. The consumer purchasing the black market raw milk faces no risk other than consumption of a product that comes from an underground farm operation. But hey, black market raw milk is cheap! So one might assume that the consumer was generally pleased with that state of affairs. Legal raw milk is a whole ‘nother thing.

For the farmer who chooses to operate legally in West Virginia’s new world of herd sharing, there is a high cost. Having completed the testing in compliance with the law, I know just how high that price tag is now.

Dr. Katie and her assistant, back yesterday afternoon to play “Lift the Tail” with my cows. 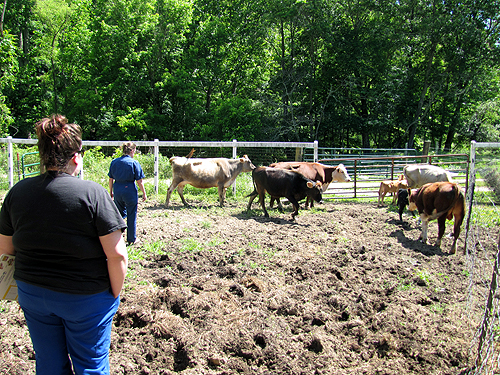 She was checking for the TB reaction. On Monday, she had injected whatever it is that reacts if TB is present in an animal. She returned 48 hours later to lift their tails and see if any reaction had occurred. Guess what? My cows don’t have TB! Guess what? I already knew that! Because all my cows are farm-raised, most of them born here, and none of them have been run through an auction house (a typical breeding ground for spreading disease) not to mention none of them have ever shown any sign or symptom of illness. I still have to wait for the brucellosis results (which is a blood test sent off to a lab) but guess what? I already know they don’t have brucellosis, which causes widespread abortions in the herd, among other signs. I have no reason to do this testing other than to comply with the law, and the testing must be repeated annually in order to continue to operate a legal herd share program–despite the fact that I am now operating a closed herd. Yet I appreciate and understand the point of the state’s requirements. They want to make sure that consumers are receiving safe milk from healthy cows. They know, of course, that there is an existing black market for raw milk–which generally comes from untested herds. The testing is a consumer protection that makes sense, but at the same time does present a burden on small farmers and will likely stand in the way of many people ever participating in the new herd share program.

The final bill totalled to nearly $500 to test my herd.

It would have cost the same if I’d tested nine cows or one. You’re required to test the entire herd, and for me, that’s currently nine. But the charges are for two farm calls and the two hourly charges for the vet’s time here. It’s not priced per cow. Because we ran the cows through so quickly and efficiently both times, staying under an hour both times, it cost no more to run through nine and than it would have to run through one.

But how can the small farmer even afford to offer herd shares at that cost? Well, not at $5/gallon black market prices, that’s for sure. I haven’t even gotten started and I’m already $500 in the hole. What else will herd sharing cost me? It will cost me additional feed, to the tune of a couple hundred dollars a month in order to milk enough to sell enough shares to justify the vet bill, plus my time and labor that could be spent on other efforts to make money. Milking and handling milk is time-consuming. It’s not like picking up a gallon of milk off the store shelf. It’s a twice-daily grind that can be exhausting–and yet beautiful at the same time. You have to be driven to do it, or it would never be worth it for anyone in today’s world, but doing it for myself and my family is one thing. How can I make it worth my time, labor, feed, and vet costs to do it for distribution? I have a passion for my cows, and a passion to see this new law succeed, but how far can my passion extend when the cost is so high, for me?

You can see my price structure and how I’ll be selling my herd shares here. My breakdown is based on similar programs long established in surrounding states including Virginia, Ohio, and Pennsylvania. My pricing is actually a little lower. It’s as low as I can do it and not operate at a loss. But to not operate at a loss, I will have to sell at least six full shares or some combination of full and half shares in twice that many numbers. It will mean a lot of milking, and I may still not break even or make a profit.

I plan to operate my herd share program for a year and find out. Will the time and labor be worth it? Will people pay what equates to $10 to $15 (depending on cream on top of the milk or not in my cost structure) per gallon when they can buy black market milk for $5? Will the consumer care enough that the milk is from a tested herd in compliance with the law? Will the consumer know the burden that places on the farmer to operate a herd share and be willing to participate in that price tag, not just with their moral support but their dollars? Will the consumer appreciate that raw milk is a small batch, hand-crafted product that is in a completely different league from cheap, degraded store milk?

An attendee at a recent workshop was asking me about the poultry processing workshops, and asked me how much that chicken cost per pound. She buys chicken on sale for $1/pound. I told her that home-raised chicken wasn’t $1/pound, it was quite a bit more, but it wasn’t the same as the chicken from the store. But I could tell from her reaction that the apples and oranges between farm-raised chicken and cheap store chicken was of no never mind to her. The price tag was the bottom line.

I’m a pioneer in West Virginia’s new law. I’ll be among the first to offer legal herd shares in this state. If you’re in the local Roane County or Charleston, WV area where you can pick up milk from my Clio, WV farm and you’re interested in joining me on my Conestoga raw milk wagon, email me at [email protected] I anticipate being able to offer herd share contracts for cow milk starting July 1, 2016. My plans for goat milk herd shares are on hold while I see how the cow milk herd shares work out, but if things go well, I will be offering goat milk herd shares in the future. If things don’t go well, my pioneer days will last a year and I won’t be offering herd shares next year. I’m putting myself out there as the farmer, making legal raw milk available for the first time in decades in West Virginia. But does anyone want it, at the real price of real milk?