Dear readers, I bring to you a tale of two boxes. 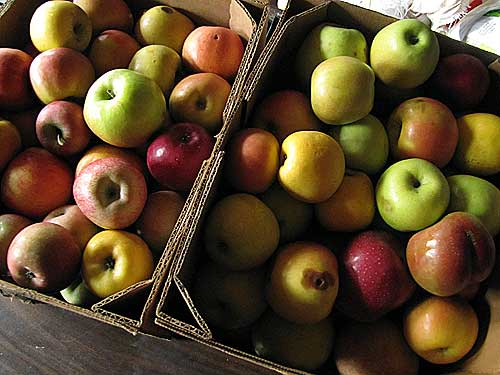 The two boxes were fairly equal, each around 25 pounds of mixed apples.

I cut the first box up by hand, peeling, coring, slicing. 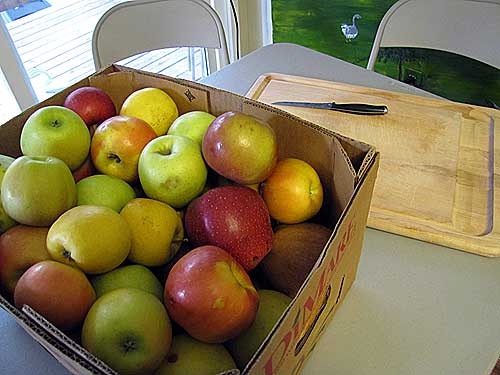 It resulted in 13 pints of applesauce.

For the second box, I finally ventured into the land of my food strainer. I bought a Squeezo strainer several months ago. It’s not cheap, so this felt like a big purchase to me–but worthwhile, probably. I heard tell it was a huge labor-saver for processing fruits and vegetables, and that it would make more of the time/money spent on said fruits and vegetables by helping me get everything there was to get out of them. There’s a certain amount of waste in hand processing.

Behold the Squeezo and its many parts. 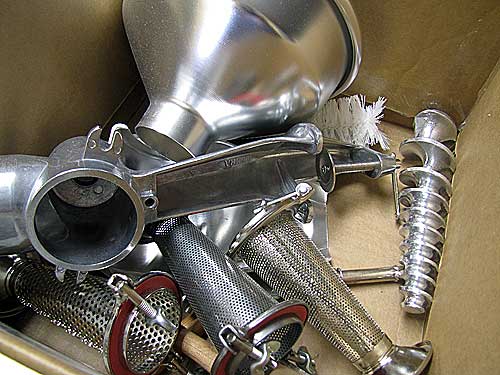 I looked at the parts in the box several months ago–and left them there. I have a phobia about mechanical devices.

A couple of months ago, Dede (wvhomecanner) visited to help me with a preserving workshop. I got her to show me how to put the Squeezo together. 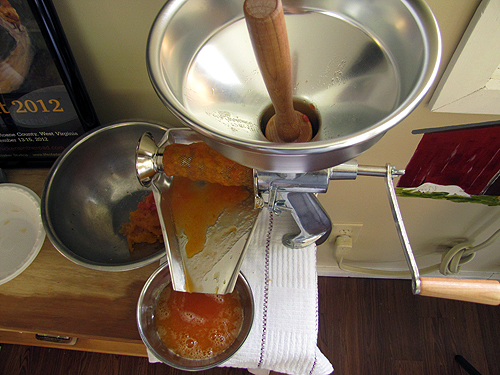 She assembled it promptly, and demonstrated how to put some tomatoes through it. And I thought, I’ll never be able to do that.

A few weeks ago, I bought a box of apples. I thought about the Squeezo, then cut up the box by hand.

A few days ago, I bought two boxes of apples. I thought about the Squeezo, then cut up the first box by hand. It took me about four hours to do all the peeling, coring, slicing by hand then process the apples into sauce in my food processor, for a result of 13 pints of sauce. Could I do better with the Squeezo? Probably. But…..

I brought up the second box of apples from cellar storage. I thought about the Squeezo, then got out my cutting board and knife and…. SUZANNE! GET OUT THE SQUEEZO! I spent over $200 on this Squeezo (Deluxe–with three screens). WHAT IS WRONG WITH YOU? (Don’t answer that question.) I’m using the sauce from these apples to make whiskey-raisin apple butter to sell at the Black Walnut Festival. I want to make the most of my apples.

With great timidity, I got out the Squeezo box and looked at its many parts. Again.

I have three screens (cone-shaped things with holes). One is the “regular” screen that comes with the standard Squeezo package–it’s the medium screen, for apples, tomatoes, most vegetables, etc. It’s the screen you would use the most, so it comes with the Squeezo. If you get the Squeezo Deluxe, you get the screen with tiny holes–the berry screen, and the screen with bigger holes–the pumpkin (squash and so on) screen.

First, you clamp the base (housing) to something. I even have a phobia about clamping, so this seemed difficult but wasn’t really. I clamped it to the stainless steel table in the studio. 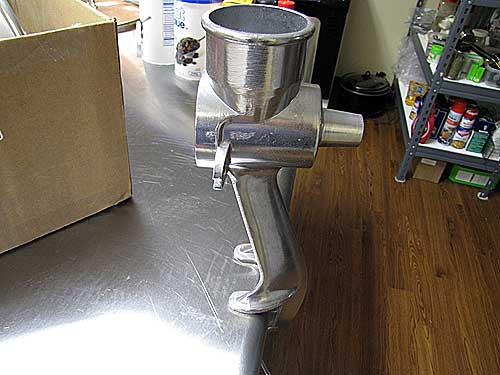 Then I realized I clamped it too close to the end of the table and had left myself no room to place a bowl under it, so I had to move it. But anyway.

Insert the drain tray. The good stuff comes out there. Then there’s this thing called a “ferrule” that you put on the “drive shaft” along with a spring. I don’t even like these words. They make me feel like somebody’s about to quiz me on what is a Phillips screwdriver and I won’t know the answer. I put the drive shaft in the wrong way at first. I finally figured it out because I couldn’t get the handle on right the way I had it. Whew. I think. Then you put the scrolly thing into the screen and attach it by tightening wing nuts. 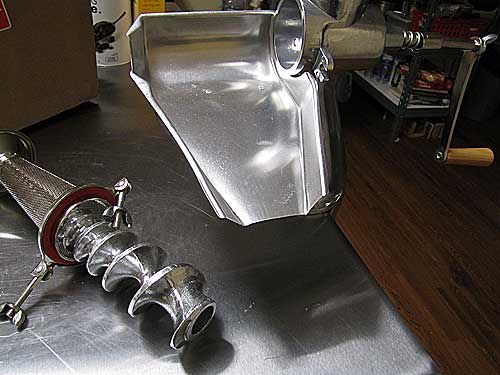 Now you put the hopper on top, and add a couple bowls to catch stuff. 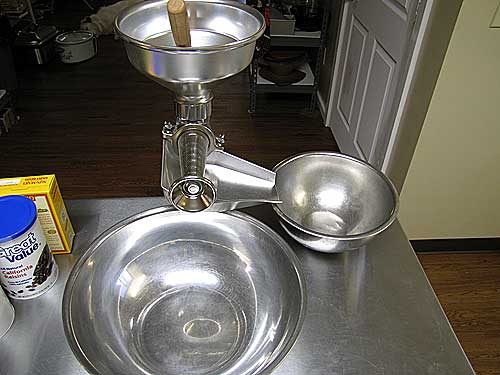 There’s a wooden plunger thingie to push food down into the hole in the hopper. 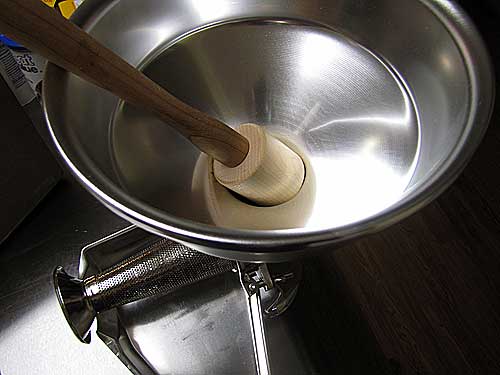 The assembly was stressful (you know, for me)! But I think I did it. I turned the handle and could see the scrolly thing turning inside the screen, so I crossed my fingers and went on with the apples. 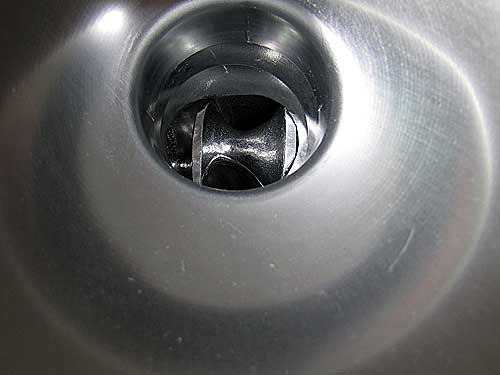 I washed and quartered the apples, removing any bad parts. 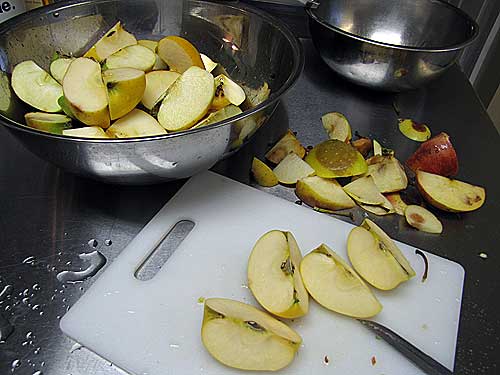 With about an inch of water in the bottom of two pots, I steamed the quartered apples. Processing the apples this way took about 1/2 hour of labor, not counting the steaming time. While it was steaming, I was eating bon bons on the couch. (Just kidding. I was actually feeding one peppermint treat to Shortcake. Which takes a LOT OF TIME, I’m tellin’ ya.) 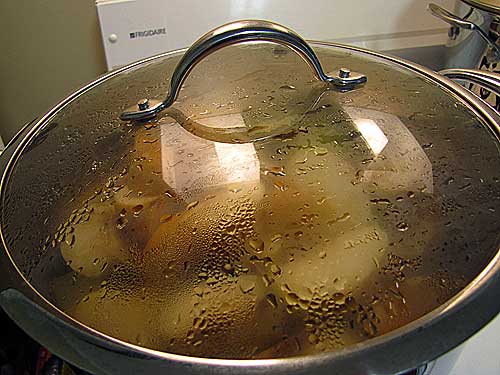 Once the apples were steamed, using a slotted spoon, I loaded apples into the hopper and started turning the handle, pushing down with the wooden plunger thingie. 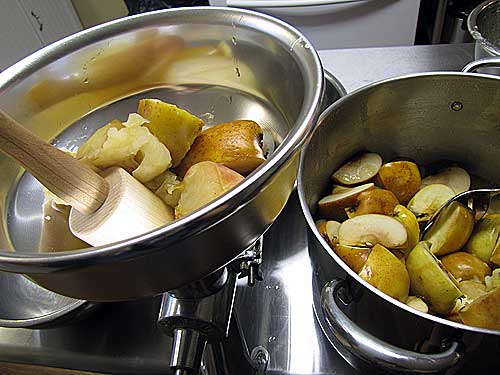 The core and peel mush comes out in one bowl. 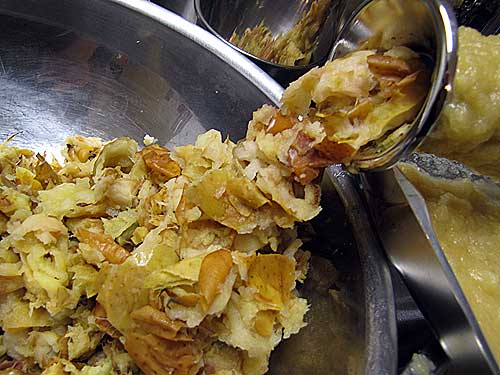 And the applesauce comes out in another. Like magic! 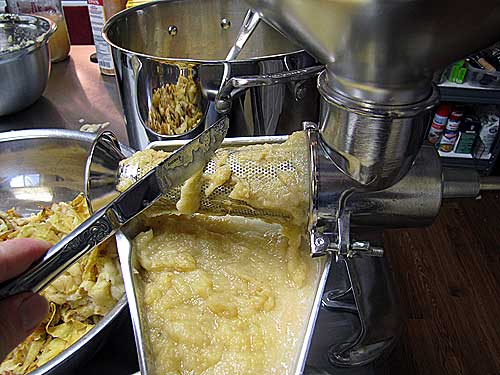 When I finished the apples, I took the core and peel mush and put it through the Squeezo a second time. (It doesn’t hurt to scrape the screen occasionally as you’re working.) 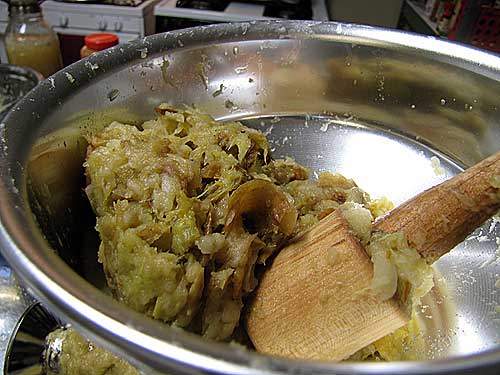 And still got more sauce. 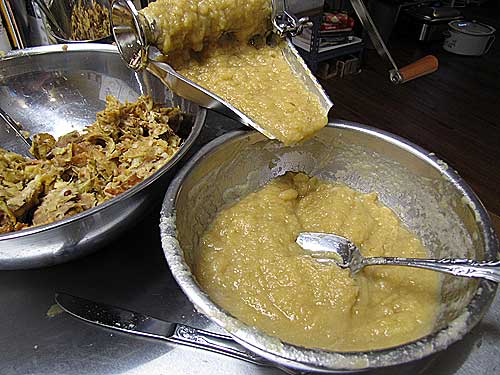 So after I put it through a second time, I put it through a third time. I wanted to be sure I got every tidbit out of those apples! The sauce that came out of the core/peel mush was particularly thick. It looked like I’d gotten pretty much all there was to get, so I quit there.

Altogether, I got 20 pints of sauce using the Squeezo. (Four of those pints came from re-Squeezo-ing the core/peel mush, so that was worth it.) Two and a half gallons of sauce out of that one box of apples! 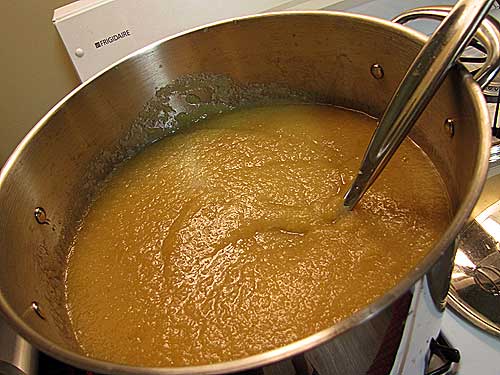 I haven’t made a comparison using a mechanical peeler, but I don’t believe you would have the same substantial increase in end product from a peeler because you can’t re-process the peels/cores to get all the apple out the way you can with a food strainer. I have used a food mill, and I loathe food mills. A food mill is the pot-looking thing that has a handle and a screen at the bottom (reminds me of a sifter, sorta). You have to hold onto the pot and turn the handle. It requires more time/labor, and I find using it to be awkward. And loathesome. The Squeezo was easy.

The only downside of the Squeezo is no peels to dehydrate, but I’ll give the squeezed-out mush to the goats and chickens, so it won’t be wasted. I also saved the juice–nearly half a gallon–which I’ll filter and use to make apple syrup.

There are other manufacturers of similar food strainers, by the way. This is not a Squeezo-sponsored post! I just happen to have a Squeezo. I do believe it’s reputed to be the best. It’s all-metal construction and they’ve been making them for nearly 100 years. If you go looking for a food strainer deal, just remember to notice how the strainer is made. This one

(for example, there are others) has plastic parts. This is the Squeezo

that I have, and it’s all stainless steel parts. That one has all three screens. If you don’t think you’ll need the berry and pumpkin screens, the standard Squeezo with one screen

is a little less expensive. (If you think you will ever want the berry and pumpkin screens, it costs more to buy them separately later than if you just buy them altogether with the Squeezo Deluxe, which is why I did.) A food strainer with plastic parts is much less expensive–but it may not last very long, especially if you put it through heavy use. The Squeezo will pay for itself with the increase in output, the labor reduction, and its virtual indestructibility.

But also! According to the little booklet that came with the Squeezo, the design has not changed in any way since the 1980s. If you can find a used Squeezo (and why not, they last forever), you can still buy parts that will fit it, etc. However, one must wonder why anyone would let a Squeezo go, so finding a used one might be the problem.

You do have to thoroughly clean it (and dry it, to prevent rust) after using it, so that’s an extra step at the end, and you have to take it all apart to do that. 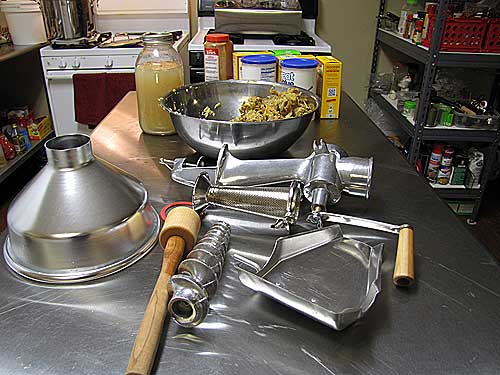 On the upside, I’m not afraid of putting it together again!