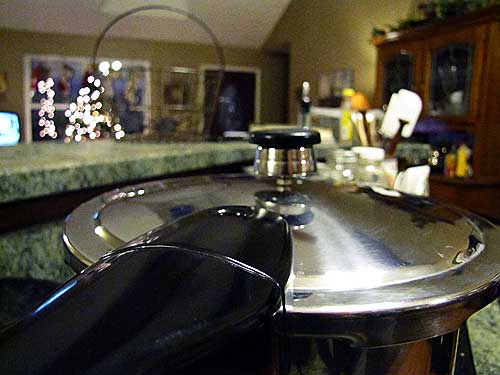 I was thrilled to get a pressure cooker for Christmas. Pressure cookers used to be quite common in the kitchen. Women who grew up around home canning were comfortable with the process. I remember my mother using a pressure cooker when I was a kid. Later, with the popularization of the microwave and less home cooking in general, pressure cookers seemed to fade away and mostly you only heard about them when someone was telling a story about exploding pea soup. There’s an exploding pea soup story around every corner, but pressure cookers aren’t dangerous and accidents won’t happen if you use them properly. (A deep fryer is far more dangerous in your kitchen than a pressure cooker.) Today’s pressure cookers are safer than ever, so don’t be afraid to get one. A pressure cooker is also a very different way to prepare food quickly than a microwave. Microwaves tend to cook unevenly, and they don’t always cook food correctly in any case. I don’t really like microwaves, though I have one. I keep it in my pantry, which says something about how often I use it. A microwave is best for reheating already cooked food, while a pressure cooker does an excellent job of cooking the food in the first place as well as retaining flavor and nutrients. Plus it doesn’t involve all of that suspect zapping. To use, you place the lid on the pot and rotate the lid until the lid handle and the pot handle line up and lock. Immediately place the pressure regulator on the vent top. (It fits loosely. This is how it is supposed to fit. Also, this is different than when I use my pressure canner that instructs exhausting steam through the vent before placing the regulator on top. This is why it’s important to have the instruction manual for whatever pot you are using so that you can follow the manufacturer’s directions for that specific pot. This is how mine works.)

Turn on high heat and monitor the pot until the regulator begins to jiggle. Start timing when it starts jiggling.

My pot comes with a cover lock to show when pressure is present in the pot. As the pressure builds, the little circle pops up, even with the pot’s surface. When the pressure goes down after cooking, the cover lock drops back down. This is an added safety feature that shows you visually when it’s safe to open the pot. 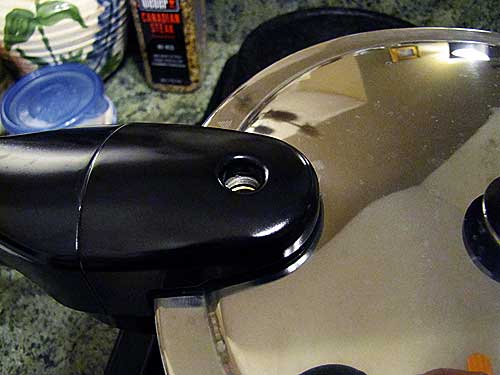 Depending on the recipe, after cooking you either bring the pressure down by setting the pot in cold water or allow it to come down naturally. (In most cases, you just let the pot sit and let the pressure drop on its own.) Remove the pressure regulator first and then take off the lid.

With a pressure cooker, you can cook a whole chicken in 15 minutes, or a pot of pre-soaked beans in 5. You have to add on time to either side of that for the pressure to build and then the pressure to go back down, but it’s still a handy way to get dinner on the table faster on busy days. I love my crock pot for busy days, but crock pots take pre-planning hours in advance and sometimes that pre-planning just doesn’t happen. A pressure cooker is also really great at tenderizing meat. From a frugality standpoint, this allows you to make less expensive cuts of meat as fork-tender as their more expensive counterparts. If you purchase a used pressure cooker, be sure to get one that comes with the instruction manual or make sure you can find the manual online before you buy it. Learn how to use a pressure cooker correctly–and go forth unafraid! The peas aren’t gonna get ya!