Thursday, I made some of these herb and swiss crescent rolls oversized, for sandwich rolls, and put together three ham and cheese sandwiches to go in my sandwich press. 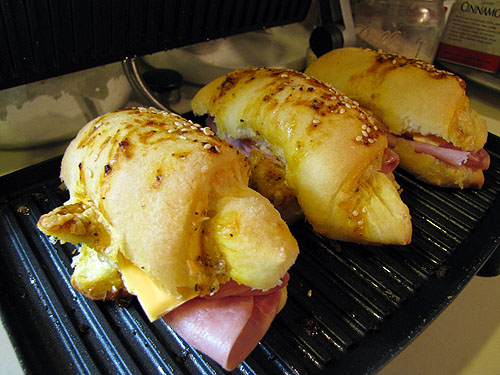 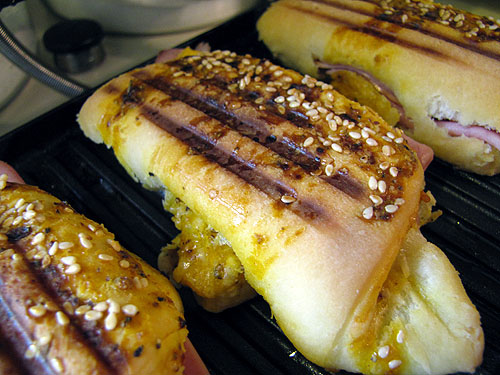 I had made one for me and two for Morgan. It was the first day of school and Morgan had volleyball practice. As I was taking them out of the grill, she texted me to remind me that she was having dinner in town with friends. Unfortunately, I had forgotten about that when I was fixing her sandwiches.

But fortunately, that was right when Ross unexpectedly rolled into my driveway!

And I decided I didn’t really need dinner, piled all three sandwiches on a plate, and presented him with his meal as soon as he walked in the door! Who’s the best mom in the world, who? (Ha.)

It’s always fun to have a big eater in the house. For breakfast on Friday morning, I made eggs, bacon, and biscuits.

Saturday morning, I made biscuits and gravy with venison sausage. By Sunday morning, I was out of milk and eggs. Yes, that can actually occasionally happen even if you have a milk cow and a passel of chickens! I’d been making plenty of bread, though, of course. 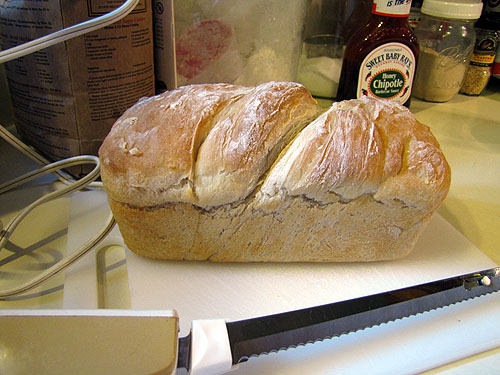 That effect on the top of the loaf is made by twisting the dough when you put it in the loaf pan, by the way. I fried some bacon then fried thick slices of Grandmother Bread in the pan. 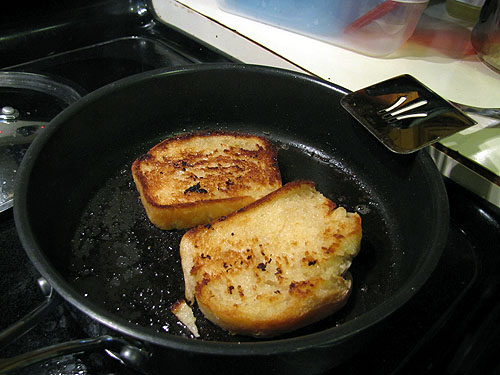 The slices were topped with some apple maple jam and homemade maple syrup. Ross’s plate: 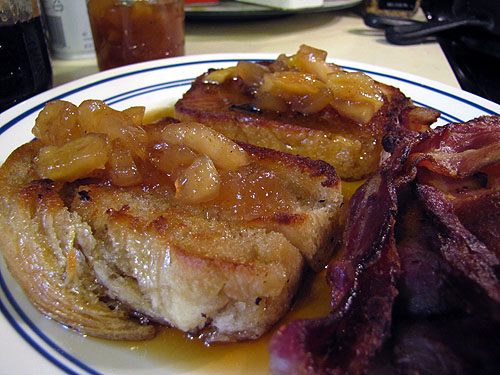 This was soooo delicious, and was a substitute for real french toast since I had no milk or eggs.

I didn’t take any pictures of what I fixed for dinner Friday and Saturday nights, but Friday was a pork tenderloin I’d already taken out of the freezer before I knew Ross would be here. Saturday night, I took out some tenderized venison steaks. Since it was Ross’s deer, I try to cook venison for him a lot whenever he’s here. I used the venison steaks to make chicken fried steak, with more venison sausage gravy, and it was amazing. I had some cheesy scalloped potatoes to go with it, and that stuff goes fast. They were eating the leftovers the next day like candy. Dessert was a berry crumb pie.

Here are the links to all the recipes I mentioned–except for the scalloped potatoes, which somehow I realize now I have neglected to post! I suppose Morgan, who couldn’t keep her head out of the leftovers, won’t throw a fit if I make it again already so I can post the recipe!