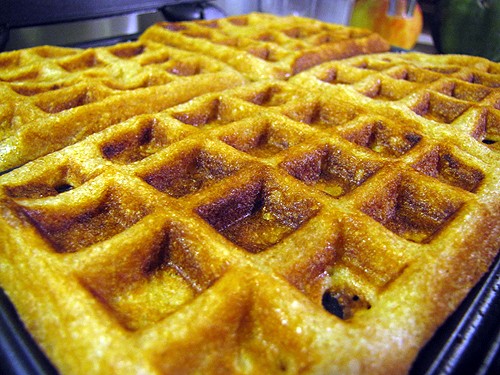 When I was growing up, waffles were something we got out of a box in the freezer. My mom made a lot of pancakes, but never waffles. She didn’t have a waffle maker. I never had one either until fairly recently. Morgan loves pancakes, and it’s one of her most requested breakfasts, so I decided to treat her to homemade waffles. Next thing you know, I had two waffle-makers. (Will explain that later.)

Waffles are a curious beast, perfect with a crispy exterior and a tender interior, and mastering their perfection takes some practice. Most waffle recipes don’t contain sugar, but sugar is actually a purposeful ingredient here. I don’t like a sugarless waffle, just from the taste standpoint, but sugar also adds to browning and to a crispy outside. Even if you don’t like sugar in your waffles, add a little bit for those reasons.

For the tender interior, it’s important not to over-mix. I whisk lightly then let the mixture stand in the bowl for about 5 minutes then whisk lightly again. It helps by giving the dry ingredients a chance to sort of blend on their own as they stand in the wet mixture. Separating the eggs and whipping the whites, folding in at the last minute, also helps. (It’s an extra step. When I feel lazy, I add the eggs in whole. When I’m feeling my waffle mojo, I take the extra step of whipping the whites.) 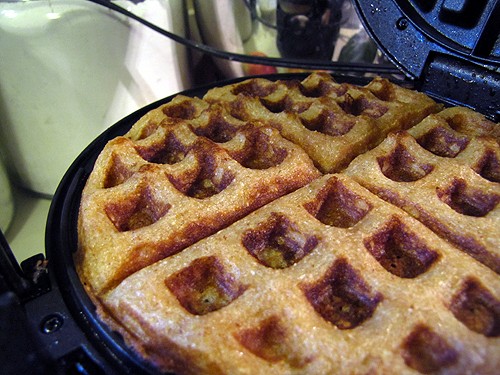 I like it, and I still use it sometimes. I like the round waffles. They’re prettier. I also like the light that comes on to tell you when the waffle is done. 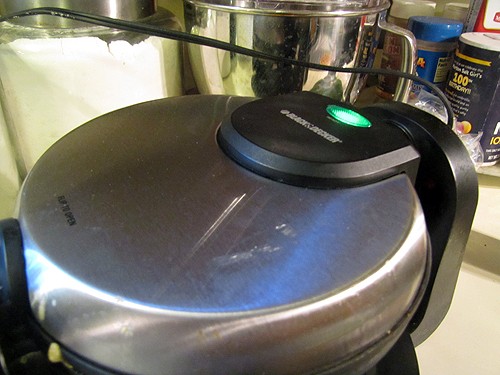 But I more often use this Hamilton Beach square waffle maker 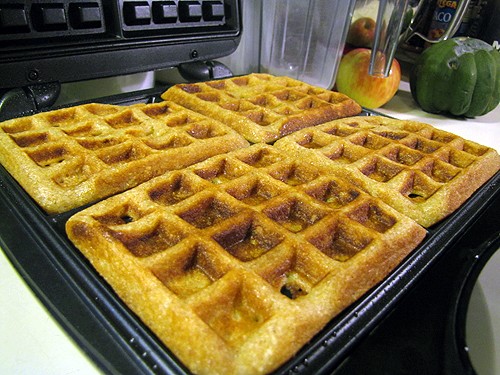 Because even if Morgan’s here, we never eat all the waffles. To save waffles, I just cool them then place them in a freezer bag. Then I have frozen toaster waffles just like my mom! It’s so handy! I love making extra waffles. And square waffles just fit better in my toaster. It doesn’t have a light that comes on to tell me when the waffles are done, though. I watch the steam–when the steam stops, the waffles are ready. 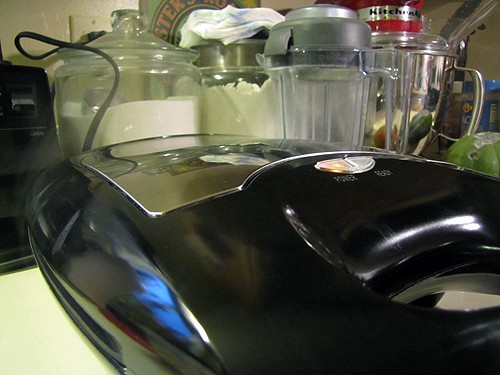 I also watch the time–it takes about five minutes.

This one also makes four waffles at a time, so I can get all the waffles baked faster. (If you’re making waffles for a crowd and keeping the earlier ones warm, put them on a crisper sheet in a low oven. A crisper sheet–with holes in the bottom–makes sure air gets all around the waffles, keeping the exterior crispy.)

One more waffle tip: Morgan loves chocolate chip waffles. When adding chocolate chips, nuts, blueberries, or whatever, it’s best to not add them straight into the batter. Instead, sprinkle them on top after you’ve poured the waffle batter into the waffle maker, right before you shut the lid.

Plus, chocolate chips in my waffles just grosses me out and I don’t want the entire batter contaminated with them!

Since I got my Vitamix and grind my own grains, I’ve been making a lot of whole grain waffles. Here’s my favorite recipe. I often also add about 1/4 teaspoon cinnamon and 1/4 teaspoon nutmeg, depending on my mood. I like a little spice in my waffles. 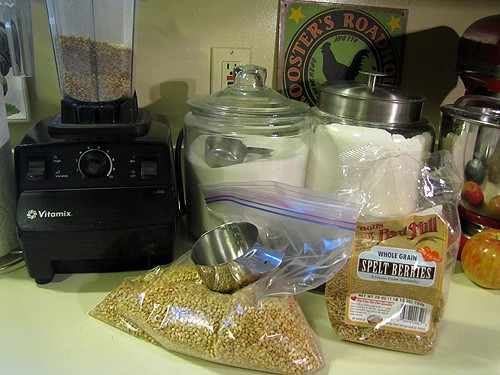 In a mixing bowl, combine flours, sugar, baking powder, and salt. In another bowl, whisk egg yolks lightly. Beat in milk and oil or butter. Add egg yolk mixture to the flour mixture all at once. Whisk lightly and let stand five minutes while preparing the egg whites. Beat egg whites till stiff peaks form. Whisk the flour/milk mixture again lightly then gently fold in egg whites. Bake according to your waffle maker’s instructions. This recipe makes about eight square waffles.

Round, square, any way you like them, they need a lot of butter and maple syrup on top! 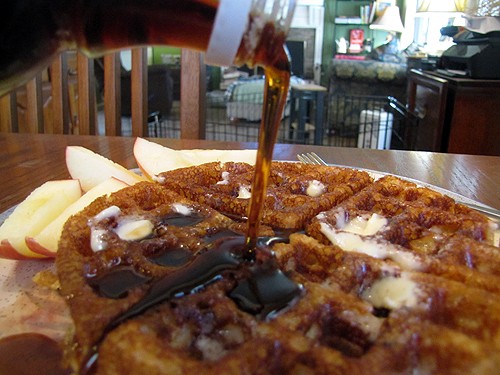 P.S. You can find some interesting waffle history here, by the way. I love food history!