Pour over meat and bake at 300-degrees for 1 1/2 hours, adding tomato juice to moisten as needed.

That sounds delicious, doesn’t it? OR NOT.

A while back, I received a book called Wild Game Cookbook from Jolene, a reader in Texas. 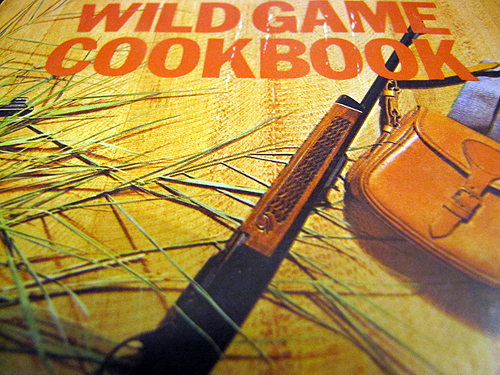 It was first published in 1968, and I have no idea if it’s still available. Most likely, you’d have to pick it up used, if you can find it. It was published by A Benjamin Company/Rutledge Book and is edited by L.W. “Bill” Johnson. (“The Hunter” is tagged to his name.) The book includes sections for upland game birds, waterfowl, small game, and big game, plus special sections for accompaniments for game, smoking and smoke, handling of game, and cooking of game.

Whether you want to fix a casserole of partridge, a breast of grouse, roast rabbit, sausage-stuffed duck, beaver tail soup, venison short ribs, or caribou collops (collops?), this book has the recipe. How about some braised elk chops? Bear stew? Saddle of antelope?

Okay. So some of these recipes (some?) are a little out of the ordinary, shall we say. I’ve eaten squirrel before. (And want to again. Unfortunately, the woodland creatures are safe from me. So far.) Venison, of course. Duck and goose and quail–but not from the wild. And rabbit. Oh, and pheasant.

I might, if I get the chance, try some of these recipes for rabbit, squirrel, and venison. And the other recipes are interesting reading, and I like that the book comes with handy tips about each type of game before launching into the recipes for that particular animal.

But I asked myself….. Would I eat that? I’m NOT a picky eater. (I wrote about this once. See The Food in Martinsburg.) I’m a pretty adventurous eater. I love food, and I’m curious about it. I rarely come across a food I despise so much that I wouldn’t finish it if I had a plate of it in front of me. I might not care for it a whole lot, might not go out of my way to get it, might not plan to serve it at my house, but I’ll eat it. I ate blood pudding one time at a restaurant in England. Now that’s gross. Really. (Blood pudding is a sausage made from pork blood.) I don’t think I truly need to have it again, but I ate it because I was curious about it.

So what wouldn’t I eat? Is there anything that repulses me so terribly that I wouldn’t eat it?

I examined the book and my adventuresome spirit. Muskrat…. Just sounds…. I don’t know. That just doesn’t appeal. Coot. Mud hen. Maybe I’d try it? Maybe. But raccoon and possum…..

Raccoon and possum. Maybe it’s because I see them as these awful nasty creatures that occasionally mayhap destroy my chickens…. I just see them as SO NASTY.

I totally can’t see myself going after it voluntarily. Unless it was the end of the world as we know it and I was, like, ready to eat bugs, too. Raccoons and possums, to me, are some of the most disgusting creatures on the planet. Maybe it’s the “chicken lady” in me, but it’s my gut reaction.