1. Yesterday, I applied for a job at Wal-Mart. I think this was the most difficult thing I’ve done in the entire past year, and not because it was a job at Wal-Mart but because it is so difficult to actually apply for a job at Wal-Mart. You can only apply using this computer program they have in the store (NO paper option!) and it doesn’t work very well. I had to get a manager and then try a second machine before I could even get past the part where you have to put in a password. (It kept kicking me off.) Approximately one hour later, after answering a series of questions like, “Do you think it’s okay to steal from your employer?” (I’m thinking NO is the right answer. I mean, do people answer, “Yes, I love to steal!” What kind of question is that?) then it got to the part about your work history. The computer program didn’t include options in the menu for self-employment. In other words, I don’t think they’ll be calling me since I appear to have no work history at all. And if they did, I’d probably be out of luck anyway. It’s very difficult for me to get a job. Interviewers always say, “You write romance novels?” Then that’s pretty much the end of the conversation since they are either, 1) impressed, but not in the way that makes them want to give me a job, or 2) not impressed yet still disbelieving that I want their job. To completely butcher the line, it is easier for a romance writer to pass through the eye of a needle than to get a real job. I asked 17 if he could get me a job at McDonald’s. After he picked his chin off the floor, he said, “WHAT?” And not in a good way. His girlfriend’s mother works at McDonald’s. Then his girlfriend starting working at McDonald’s. Then 17 started working at McDonald’s. Do we not see a pattern here? Can I not jump on this bandwagon? Apparently, working with his girlfriend and his girlfriend’s mother is just about all 17 can handle at this point. If I got a job there, I might as well bring Clover, Coco, his 12-year-old sister and a few chickens with me. That would be just as palatable in his view.

So I went home and started working on another book proposal.

2. The other day, I was just walking out the door to pick up Princess from practice and to swing by the old farmhouse to pick up 15, who gets off the school bus there, when 15 walked in the door and said, “You don’t need to pick me up.” I usually let him cool his heels for an hour or so at the old farmhouse after school so I can pick him up at the same time I pick up his sister at school after basketball practice. He does not like cooling his heels. It is nearly three miles from here to the old farmhouse. He walked. I said, “That is so cool. Do you know that your grandfather walked every day that same way when he was in high school?” I’m pretty sure not half of that sentence was out of my mouth before he had walked away. I don’t think he was in the mood for family history hour. Have I mentioned that walking the three miles from the old farmhouse to our house is, honestly, uphill both ways? And it was snowing.

3. I asked my 12-year-old for advice about my personal life last night. She told me to do what would make me happy. Man, she is SMART.

4. I ate some potato chips last night. Potato chips, where have you been? I love you, potato chips. I almost never buy potato chips. And actually someone else bought these potato chips. Wow, they were so awesome! That’s what happens when you almost never have potato chips. They taste so good when you do have them. I rarely eat out or buy junk food (for myself anyway–I do buy some for the kids, but I let them have it). It was so exciting, I wanted to eat the entire bag. But I controlled myself. Barely.

5. We were without water for three days this week. The electricity to the well was out. My dear 52 fixed it, in the snow. For me. Did you know that running water is a MIRACLE? It is. Go, right now, turn on a faucet and watch the water run. It is amazing, I’m telling you, amazing.

6. I figured out how to make Christmas presents for 10 people for under $100. I almost feel festive now. (Further details coming in some future posts.)

7. How do you stop a cat from pooping in the bathroom sink? Just wondering. No real reason. I’m lying. MAKE IT STOP, MAKE IT STOP. 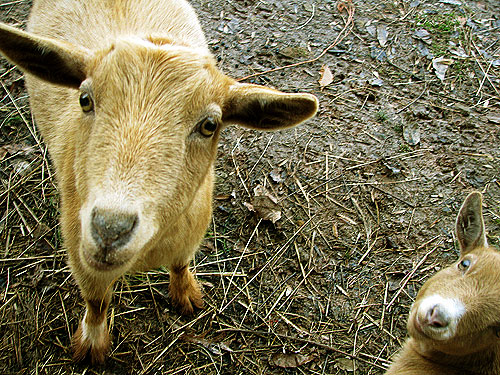