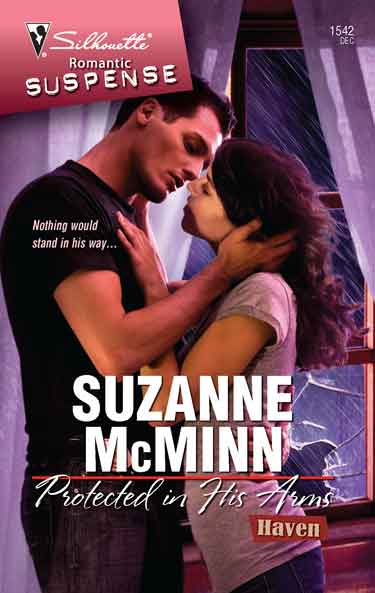 I hardly ever even mention that I am a writer, so bear with me here for a moment or ten while I actually mention it…..repeatedly….. Protected in His Arms is available now! In fact, it’s been in stores for a week or so, though it’s officially a December 2008 release. For those of you who don’t know how “category” romance works (category romance is a term referring to romance novels sold in “lines” or “categories” by Harlequin/Silhouette–I write for the Romantic Suspense line)–category romances are available in traditional “brick-and-mortar” stores the month of their release and, due to limited shelf space, are replaced the next month with new books and so on, so if you want to pick this up in a traditional store, go shopping now!

Romance novels do remain available for a longer period of time through online retailers, however. Links to online retailers are at the end of this post…. First, I want to tell you a little bit about this book.

As I developed the idea for my “Haven” series for the Silhouette Romantic Suspense line, I wanted to create a tiny town where an unusual event could trigger a wave of paranormal activity. What more fundamentally earth-shattering event is there than an earthquake? And what more perfect place could such a series be set but in the wild and preternaturally beautiful mountains of West Virginia ? First came Secrets Rising and A Hero’s Redemption. Two more went right into the works with Protected in His Arms, out now, and High-Stakes Homecoming coming next May.

Protected in His Arms takes Marysia O’Hurley, a secondary character brought to the fore from Secrets Rising, on a rollercoaster, clock-ticking ride to save a kidnapped child with the help of one wildly sexy and determined lawman. U.S. Marshal Gideon Brand knows a little girl could die without the help of the beautiful and genuine psychic. Trouble is, Marysia doesn’t believe she’s a psychic and pursuing the link between the tragic plane crash that took her husband’s life and a missing child is the last thing she wants to face…until the bullets start flying and she isn’t just Gideon’s only hope, he’s hers, too. Anything can happen in Haven….and quite often does…….

This book was a gigantic leap of faith for me (and, I must say, for my editor) as it included a plane crash, mafia hitmen, high level federal judges, U.S. Marshals, paranormal activity, and more, all set in the wilds of West Virginia. In the midst of writing this book, I was pretty sure I’d lost my mind. This was the last book I completed while still living at the old farmhouse, and I completed it from the last heat of summer 2007 to the bitter cold of that winter. I wrote it mostly sitting on my bed, freezing half to death, and interrupted 50 times a day by my beloved Georgia. I can so see myself sitting there on my bed at the old farmhouse staring up at Georgia, who was of course walking in without knocking, and her saying, “What are you doing?” And me saying, “Writing!!!” Which was never any deterrent to Georgia, LOL. This book was so complicated that at one point I wrote an entire dissertation-length explanation to myself of what was going on so I wouldn’t lose my train of thought every time Georgia walked in. But it was the most fun I’ve ever had with a book and I hope readers will find it wildly fun, too.

You can read more about Protected in His Arms and all the books in the “Haven” series by clicking here. While these books share a similar background and atmosphere, each book is stand-alone, so if you haven’t read the previous “Haven” books, feel free to jump right in with Protected in His Arms. As an aside, the “Haven” series is loosely set where I live, of course. The town of Haven is a cross between Walton and Spencer, WV–I wanted Haven to be smaller than Spencer, but larger than Walton, so I blended the two into a fictional place that was just right for my book, but many of the locations in the series are real locations around Walton and around our farm. Hopefully, though, there aren’t any mafia hitmen lurking here. But you never know……..

And if I haven’t told you enough about the book already, here is what blog reader Patty had to say about it in this topic thread on the forum:

“I got Suzanne’s book at the grocery store earlier this week. I finished it very early Thurs morning after putting the turkey in the oven. Wow. I love her writing style and I saw her humor in it everywhere. She’s so funny, but wow is this book HOT!”

Okay, that’s it, I’ll stop begging you to buy it now, LOL. If you live in the boonies, be careful out there–watch out for the mob!!!

You can buy Protected in His Arms from your armchair at numerous online retailers, so pick your favorite, but here are a few links to the book at some popular outlets:

If you are totally not interested in this book thing, but are new here and want to know more about my life at the very cool (as in COLD!! LOL) old farmhouse, click here and scroll down to the “Old Farmhouse Tour” links and have some fun.