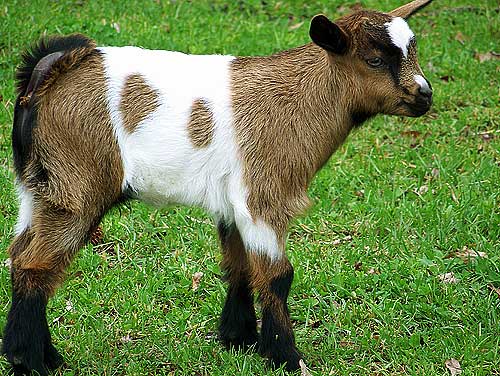 Pepsi is a fainting goat. Fainting goats have a hereditary genetic disorder called myotonia congenita that causes them to abruptly fall over when they’re startled. (It’s painless. But hilarious.) The story goes that this trait was bred into them so that they could be placed with flocks of sheep as bait–predators would hone in on the frightened–and thus fallen–goats, giving the valuable sheep time to escape. Or so the story goes. Fainting goats are slightly smaller than the standard goat and are classified as meat goats, though they aren’t generally raised for meat because they’re also a threatened breed.

Right now, Pepsi is in Tennessee.

But next month? Pepsi will be here.

Note to add: Pepsi is a boy! (Sorry, didn’t mean to leave that out!) He will not be wethered. We are looking for a girl…….