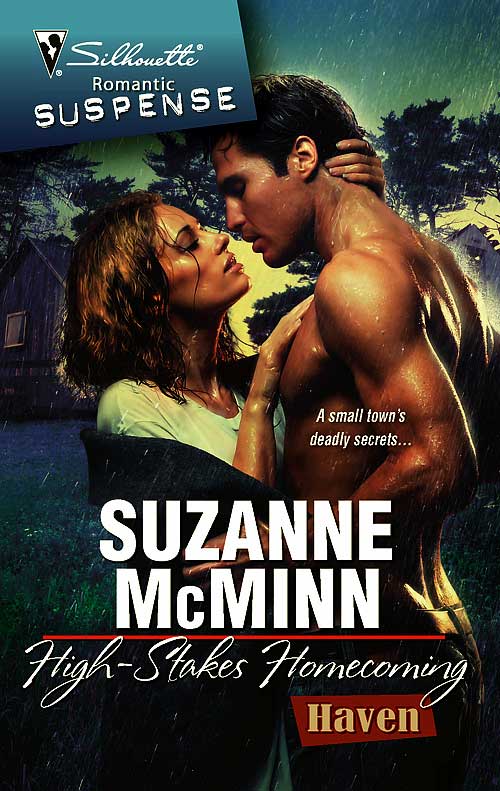 I want, really badly, to have something intelligent to say about this half-naked man. I want to be able to explain why he’s half-naked. I want to tell you about the scene in the book where he’s standing outdoors with the heroine and he’s half-naked. But I don’t know where that scene is. I must have left it out!

This book is part of my “Haven” series about a town plagued by paranormal activity after an earthquake and severe weather collide to create positive ions in the town’s atmosphere. (DON’T ASK ME TO EXPLAIN THAT FURTHER.) The books are connected only by locale. They are stand-alone plots, so it’s not necessary to have read the previous “Haven” books to read this one.

Penn Ramsey comes home to Haven, WV, to claim the old family farm he’s inherited only to find the high school sweetheart he spent fourteen years trying to forget squatting, with a four-year-old daughter no less, in his old farmhouse. But the lovely and tough/fragile Willa North isn’t squatting—-she inherited the house, too. Anything can happen in Haven, and this time it’s a case of two conflicting wills notarized on the same day by the same man, and that’s not the only thing that isn’t making sense. Soon, Willa finds herself mysteriously trapped in the old farmhouse with the wildly sexy man she lied to all those years ago. Is it the house that is enchanted, or is someone with a secret agenda terrorizing them both? Only by uncovering the truth can they hope to survive…..and gain the future happiness that is their true inheritance.

The setting of this book is actually right here on our farm, rough road, river crossing, farmhouse halfway up a hill and all. Of course, I don’t have any half-naked men running around, I haven’t noticed any paranormal activity, and I don’t think anyone is trying to kill me. But you never know. It could happen.

High-Stakes Homecoming is a May 2009 release, which means it will be in stores the last week of April. But! You can pre-order it now if you want to make my day! And, why wouldn’t you want to? After all, it may become a collector’s item as it is, quite possibly, my last romance novel. My writing has gone in other directions, and while I am working on several book ideas right now, none of them are romance novels. I have loved writing romance novels. This is my 28th. But I am not a romance writer. I am a writer, and I feel there are other things for me to do with my writing now, things that I feel very much called to do. I’ll let you know about upcoming projects when I have news.