I didn’t win the SAM-e contest. (Read SAM-e’s announcement here.) And I want you to know that it’s okay. Please don’t worry about me. What I’m most worried about is you. You worked so hard. I can’t thank you enough for everything you did. I was bowled over by your support.

Please join me in thanking SAM-e for giving me this opportunity. I also want to tell you how well I was treated by the people at Ignite Social Media, the marketing company who operated the contest for SAM-e. I was notified by phone in advance of the announcement and given the news privately. I was told they fell in love with me and my animals and my website, and about what a difficult decision it had been. I was told they watched my video over and over because they loved it that much, and some of them are now daily readers of Chickens in the Road as a result. I truly appreciate the respect with which they treated me personally, and I want you to know about that.

I also want to thank Jerry Waters, whose technical wizardry helped me create the video I submitted to SAM-e for the contest. In a forward-thinking moment, at the time the video was shot, we shot an alternate ending to the video. The contest video ends with the words, “Thanks for voting. See you at SAM-e.” In the alternate ending, I say, “Welcome to Chickens in the Road.” I realized at the time that the video was a perfect introduction to my website for new visitors. The welcome video, with the alternate ending inserted, is now here for new visitors to my site to find and enjoy.

The best thing that came out of this contest, to me, was the deeper connection I feel with you as my audience, and also the connections you have made together as a community. This has been an amazing thing. You are amazing. Thank you so much. (I can’t say that enough.)

I was told that they will be holding the Good Mood Blogger contest again next year, and I was personally invited to enter. I want to assure you that I will not. I will never again enter a contest like this. I don’t say that with any negative inference regarding SAM-e or the contest. It’s just not my style. It was an impulsive decision with no idea of what it would entail. It was intense. My focus is this website, and I promise you that from now on, it will not waver. Five minutes of wavering and impulsivity took me off-track. I won’t do it again. The only website-oriented contest I have ever been interested in is the Bloggies. The Bloggies is the most prestigious award on the internet for the best in blogs. Last year, Chickens in the Road was a nominee. The Bloggies, as opposed to the SAM-e contest, is not a daily vote. It’s a one shot deal. You vote, you’re done. (You can’t even see the vote count. It’s nothing like the SAM-e contest.) It doesn’t depend on rounding up connections and connections of connections. It depends on your readers. In other words, you. Why would I want to be a nominee again? Because it gives my blog exposure to new traffic, which will help me make a living writing this website. The nominations for the Bloggies will open at the beginning of the year, and if I haven’t worn you out with this other thing, I hope that you will be there. But never, and I promise never, will I ask you to do something like the SAM-e contest again. I hope I can talk you into putting up with the Bloggies once a year. Either way, I will be here every day and I hope you will, too!

And! I want to tell you that exciting things are in the works. For one thing, I will be appearing on Blog Talk Radio on January 17. I’ll provide more specific info as the date nears.

I also have a HUGE surprise coming. HUGE. Did I mention the huge part???? I’ll be launching an entirely new facet of my website in a few months. I’m not talking about some tiny thing. I’m talking HUGE. And you will be able to be a part of it. It’s going to be fabulous and exciting. And I’m not going to tell you any more than that just yet because I’m such a stinker.

I want to end by telling you THANK YOU again. Please know that I love every single one of you for what you did. I work hard on this site for you.

And here’s a fluffy chicken butt. 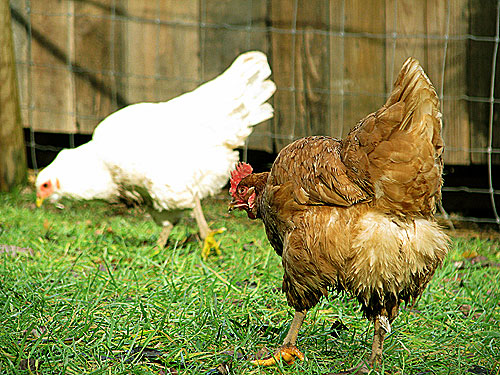