The new cow halters are ON! 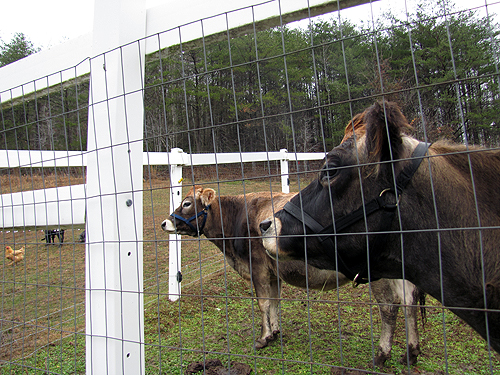 But it seems like all we did today was move animals. The rest is a blur. Often, when I need to clear “the little people” out of the barnyard area, we move them to the upper field above the barnyard. It’s a small field, but it gets them out of underfoot for short periods. So, first, the goats, sheep, and dogs were moved there. Only then it started sprinkling.

And the goats started panicking! There’s no shelter in that field! Their hairdos were getting wet!

So we moved everybody to the goat yard, where they could go into the goat house. 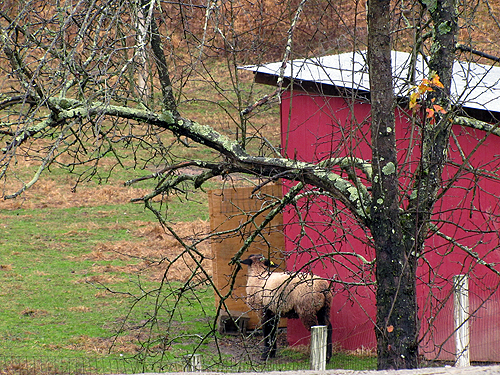 Coco had to take shelter in the “dog house” under the wagon because she didn’t move along quickly enough to make the transition. 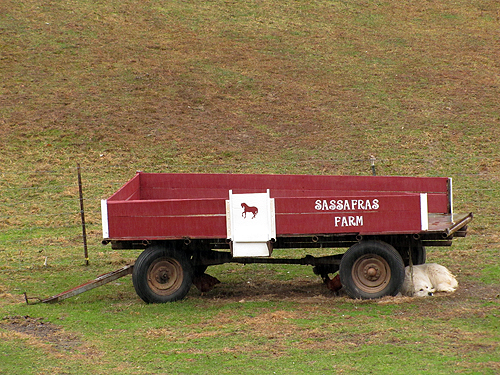 And since she’s the only “mature” dog on the farm, she’s not annoying to have in the barn yard when business is getting done, so I let her do what she wanted.

Back to the barn. The donkeys and horses were moved. Jack and Poky were locked in a stall while Shortcake and Zip hung out in the alleyway, awaiting the farrier’s arrival. (Zip was put in a stall once he arrived while he tended to Shortcake.) 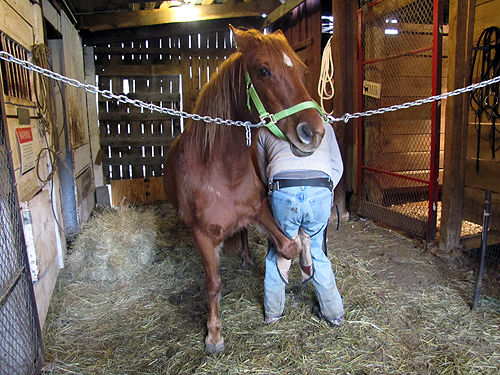 Today, everybody had a hoof-trimming and a worming. 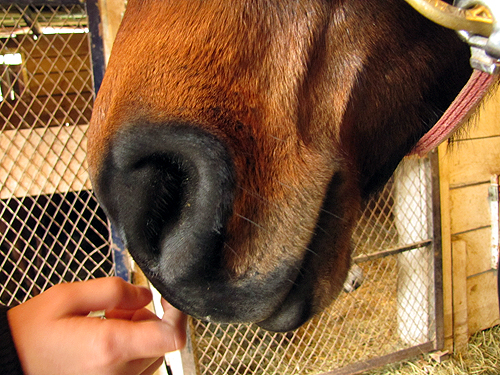 I love to pet soft velvety horse snouts. Is that weird? Horses are so soft just above and below their mouths.

Shortcake was well-behaved except when I tried to walk away to get the wormer. The farrier told me to never move again when he’s trimming her. Ha. She acts like she doesn’t care about me, but when she’s “under the knife” she wants me at her side! Ha! 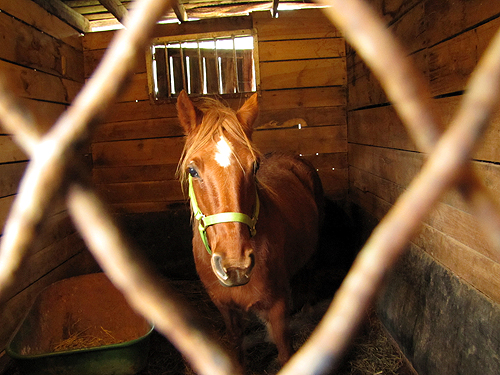 She was kinda mad about the worming, and when I let her out of the stall where we put her while Zip was being finished up, she butted me with her head, first time she’s ever done that. I was talking to the farrier about her–this is only the second time he’s seen her–about how well-behaved she is undersaddle, and what I know about her history, which isn’t much. She was well-behaved for him. He said, “She’s nervous. She’s been beat in the past.” Maybe so, I’ll never know. I just know it’s going to take a long time before she really trusts me. I’m working on it.

Then came the donkeys. They were both ornery today. Jack is usually compliant, but he was feeling his oats. Poky is never compliant. It always takes two people to hold her for a trimming. Morgan wasn’t here the last farrier visit, so I let her have a turn today. 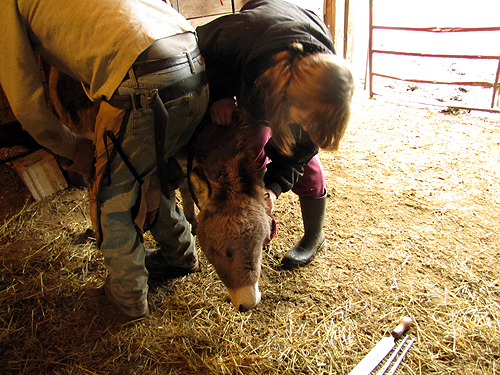 We’d already taken the horses back to the pasture before we brought the donkeys out of the stall, which was a good thing because the donkeys, Poky to be exact, were all kinds of trouble getting back. Finally we had to move the goats and sheep back to the little upper field and take the donkeys through that way after Morgan ended up chasing Poky around the front yard when she tried to take them out past the house to the pasture.

The goats, sheep, and chickens really made out because every move involves bribery to grease the wheels. 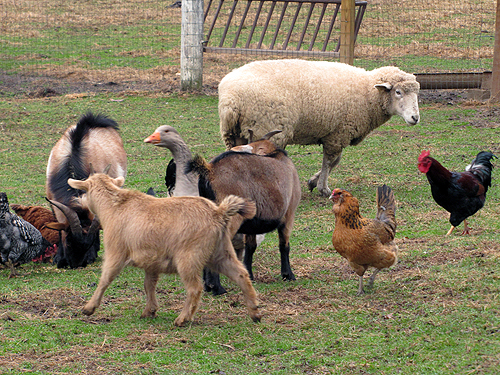 And then, just when Morgan really wanted to go back to bed, I reminded her we were going to do cow halters!

I tried the method of putting down a bucket of food and letting Glory Bee sort of “walk” into the new halter when she put her head down to the bucket, but she was having none of it. I’d brought Glory Bee and BP into the alleyway after we’d moved out the equine people and when I got tired of chasing her up and down the alleyway, I ran her into a stall. From there, it took two of us, but we managed to corner her and get her new halter on, slipping the old one off underneath. BP was less trouble, no running, just generally annoyed that we were bothering her. We managed to get her old halter off her head and everyone was fixed up.

I checked out Glory Bee’s behind when I took her into the milking parlor. 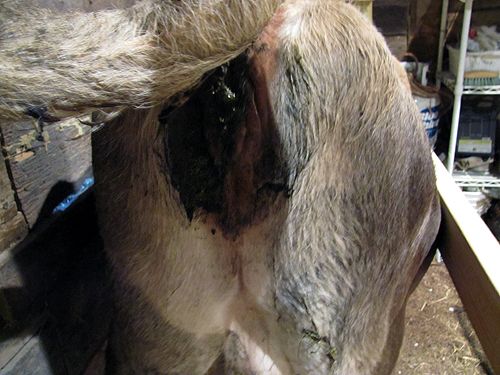 Things look pretty much the same, except dirtier. 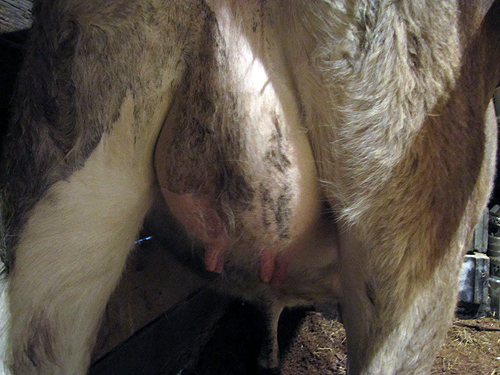 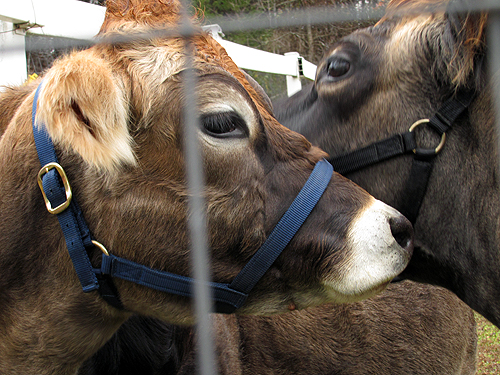 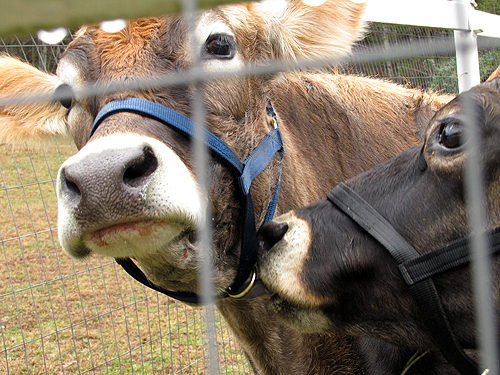