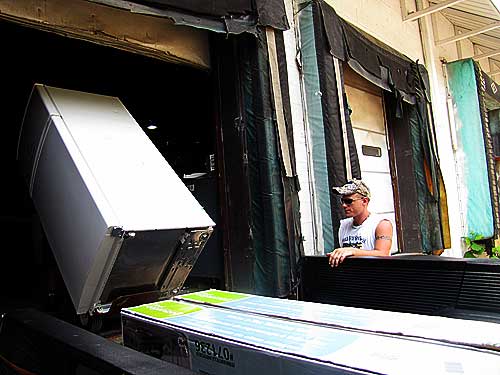 Ross spent all day helping me yesterday. He’ll probably never come back for fear I’ll be remodeling something! Actually, Ross loves remodeling and construction and probably only wishes I’d had something he could have used a power tool on. We went to the big city in his truck, offloaded an entire truckload of trash I’d accumulated downstairs in cleaning out, then picked up two big freestanding shelving units (which he later put together for me) at Lowe’s and a refrigerator at the scratch ‘n’ dent store! It’s the beginning of my workshop kitchen! I have that area cleaned out now and have started painting the block wall in the kitchen. (PIctured: Ross watching the fridge at the scratch ‘n’ dent store being loaded onto his truck.)