When Ross shows up, he often arrives with a little gift for me. (Such a nice boy!) Last weekend, he brought me this sign: 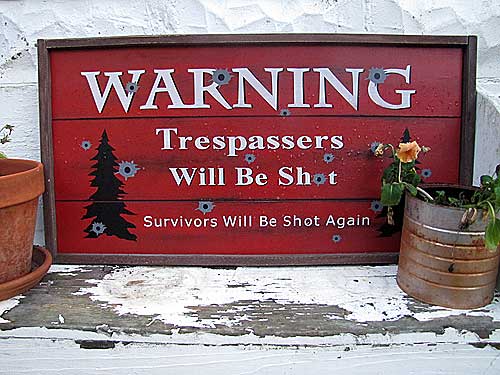 It feels a little unfriendly! But it’s the type of sign that suits Ross’s sense of humor, so I view it fondly on those terms. Ross will be arriving this Sunday and has TEN days here for Thanksgiving! He’s so excited about hunting, I’m not sure he’s thinking about anything else right now. He mail ordered ammunition that is being shipped here this week, and yesterday he emailed me to remind me to take the animals out of the pastures. Aww. How sweet! He’s worried about accidentally shooting one of my cows! Maybe he will like to help me lift Glory Bee’s tail so we can get a better look at her bee-hind?

I wrote him back that I would be taking the animals out of the fields for the two-week duration of the hot, wild primary gun season but not because of him! HE knows they’re there! What I’m always worried about is the poacher straying across my property lines who doesn’t know my animals are there. My animals will be confined to the front and back barn yards and the barn until it’s over. I’ve never lived any place where deer hunting is so insane as West Virginia. This is a very enthusiastic hunting state, and the start of gun season on deer is the craziest. I moved in here last year on the first day of gun season, and that was my first week here. I learned then to expect poachers. From my front porch, I watched men run down the hill across from the house on four-wheelers dragging deer off my land and loading onto their pickups. It’s not Ross I’m worried about at all…. (I would rather that sign said POACHERS would be shot.)

On the upside, I have an empty chest freezer, and mayhap it will be filled with venison soon!