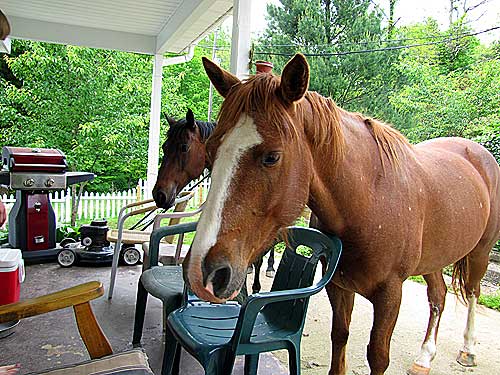 …must come to an end.

It’s so much fun to have the horses around the house. I had them up around the house for three days. Most of that time, they were wonderful. They’re “people” animals and are social with their humans. They like to follow you around, be petted and brushed, fed snacks, and generally be part of the family. They enjoy looking in your windows to see what you’re doing when you’re not paying attention to them. Outside, they mowed and mowed and mowed. They left the flowers alone. They didn’t eat the paint off anything. They didn’t even start pooping on the porch until the third day. But what really got to me was that they wouldn’t get OFF the porch. A horse is a really large animal. They don’t know they’re big, so they just amble around like they’re the size of a cat. Only they’re not. So when they started breaking stuff, they had to go. In the picture, you can see Morgan’s attempt to “fence off” the porch with chairs. I should have taken some pictures of her shoveling horse poop with a snow shovel.

They’re in the upper pasture now and forever. Or until I miss them too much and the mowing needs done again!