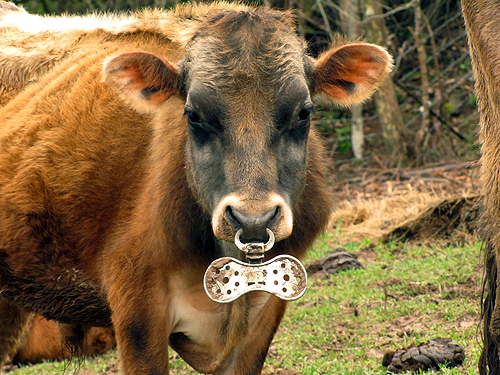 This bull is too clever for his britches. He’s gotten so adept at life with a weaner that he can deftly swing it back up toward his nose, get up under Glory Bee, and STILL STEAL MILK.

Since I’m not in a position to separate them at the moment, nor do I want to separate them (he has a job to do), I guess I’m putting up with it for the time being. At least he hasn’t taken it off yet (Glory Bee didn’t put up with it this long when she wore it years ago trying to keep her off mama BP!), and it does seem to be slowing down his milk consumption somewhat.

Since I don’t have any other ideas, we’re in detente pending a preg check on Glory Bee, because this bull needs to head down the road as soon as he’s completed his task–which isn’t milking!