It was senior awards night at the high school this week. The girlfriend came with us, of course. 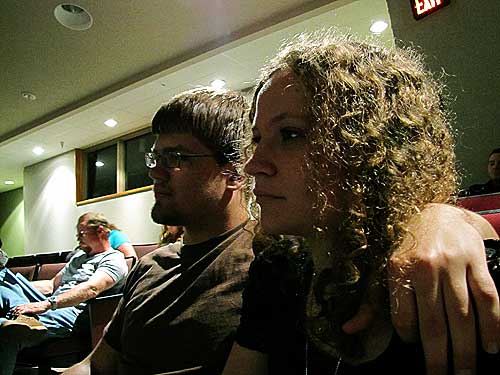 The event was sometimes exciting, sometimes boring, sometimes a little sad. And long. (Very long.) It was a preview, in some ways, of graduation. Tomorrow is the last day of school for seniors. (School goes on another week for everyone else.) Graduation is next Friday. The valedictorian is yet to be determined, though the principal read off the names of the girls in the running. It’s always girls. At least here it’s always girls. And yes, that’s right, Weston is not in the running. All the girls in the running have GPAs in excess of 4.0. This is possible through taking courses designed for college credit during high school. I asked Weston why he didn’t take more of those–he only took one–he said, with a big why-don’t-you-know-this-MOTHER sigh, “They have to take those classes after school. I was playing football.” Anyway, an interesting factoid that came to light during the evening was that a high SAT score is worth more scholarship money than a high GPA. (Not sure that’s fair, but it seems true.)

The saddest part of the evening were the scholarships given out by individuals or families in honor of a loved one who had passed away, in some cases a recently graduated student from the high school. (Most often, in a car crash.) These were small scholarships, usually $500, but big on emotion.

The reason the evening went on so long was because representatives were there from all the colleges and universities in the state to present the scholarships students were receiving from those institutions. (In those cases, the students already knew about the scholarships, of course. It was just an opportunity to publicly acknowledge the students with their scholarship in front of the school.)

The evening started with the principal making a speech about the Promise scholarship–this is the West Virginia scholarship that pays the tuition and fees for any student who graduates with a 3.0 or above to any in-state college (all tuition and fees for a public college, up to a certain amount for a private college). I was a little shocked, and sad, that the principal was excited about the “huge” number of students who had qualified for the Promise scholarship from this year’s graduating class. The graduating class numbers 149. (This is an all-county high school.) The Promise scholarship is an amazing deal that cuts the cost of college in half. The “huge” number out of 149 who qualified for the Promise this year here?

Believe me, this is a county where the families need this kind of help to pay their children’s way to college, and where many if not most of them would qualify for grants to cover the rest in combination with the Promise to pay tuition and fees, sending their kids to college for free, and yet…..

However, I appreciate that the principal made a big deal out of every student who qualified, calling every one of them up to the stage individually and shaking their hand. There were only a couple of football players in that number, Weston being one of them.

Principal shaking Weston’s hand after announcing him as a National Merit Scholar. 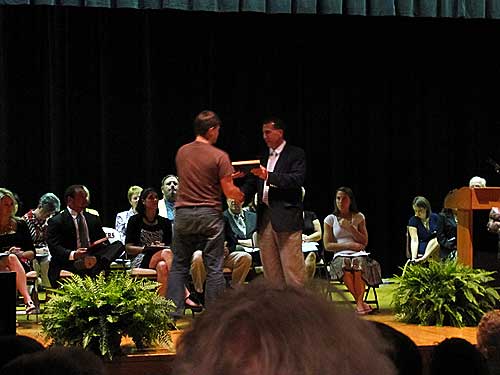 There is a very nice little foundation here that arranges a number of scholarships through local donations, and those were presented at the end of the (by then, very long) evening. I think Weston, along with everyone else, was almost in a coma when the foundation representative came to the last, and as he stated, “best” scholarship they were giving out. And then he said Weston’s name. I poked him from his coma and he got up. When he came back, he said, “What was that?” (Yes, he really was in a coma!) They gave him an $8000 scholarship.

We have been very, very fortunate. And I’m very, very proud of him. Next week, he goes to orientation at West Virginia University. He is, almost, a college student!