Adam and Robbie have been here today, back to finish up the goat house remodel. While they were here, I asked Adam to take a look at the cows. It’s been about four months since they might have been bred. Still a little early, but worth a check. Adam has been around milk cows all his life and knows as much as anybody knows about milk cows. He made friends with Glory Bee in particular when she and BP were at SarahGrace’s farm with the bull. He and Robbie work over there sometimes, too. Glory Bee became one of his favorites.

BP and Glory Bee were cooling their heels in the creek, enjoying their afternoon, when they considered themselves to be so rudely interrupted. 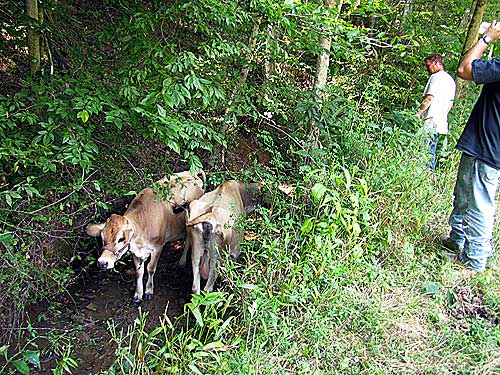 Adam punched around on BP first. “Punching” is the non-gross (aka non-invasive) method for feeling a calf. 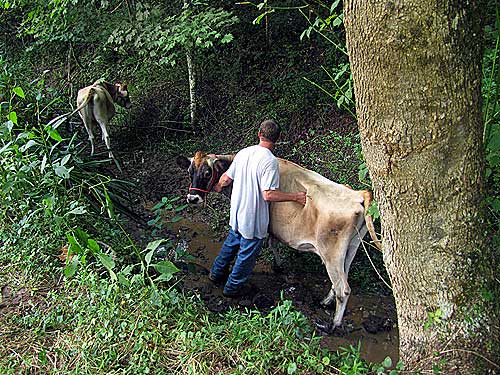 He didn’t feel anything. Could be a little early, or could be that BP is too old to get pregnant. I’ve tried quite a bit to get her bred, so if this turns out not to have taken this time, it’s probably time to consider her retired from active service.

On to Glory Bee! 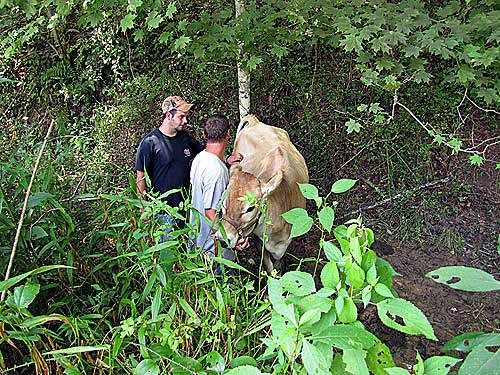 He is absolutely positive he felt a calf! She’s PREGNANT!! 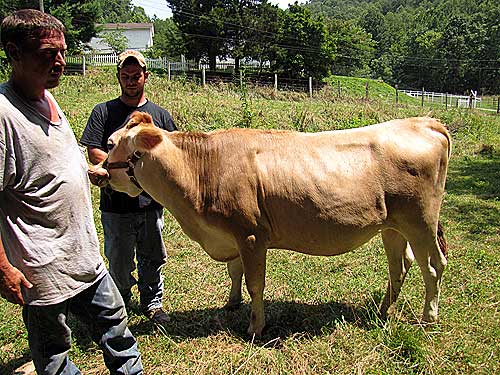 He also said she has the best condition of any milk cow he’s ever seen. BP and I are right proud!

They were with the bull for a couple of months, so depending on when she was actually bred, she may calve in December or early January. I’ll be bringing the cows to the back barnyard for the winter again and will plan to bring them early so I can start working with Glory Bee, training her to come into the milking parlor at regular hours for feed.

Milking Glory Bee is going to be very interesting……..