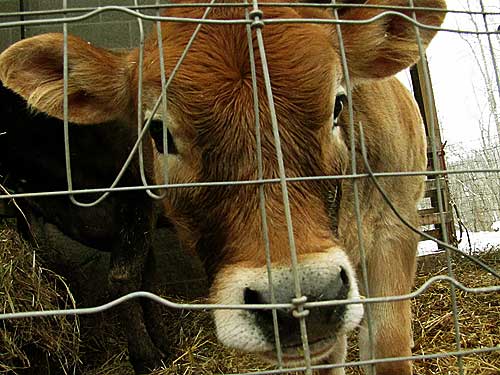 Oh, happy day! A snow day! I set about my whimsical path yesterday morning full of vim and vigor and smirk over how well prepared I was by having gotten the goat pen set up as a temporary milking parlor to which I could bring Beulah Petunia. No milking her outside the pen in the falling snow. Fabulous! I’m a genius.

So first I tied Glory Bee to the corner post of the pen so I could milk mommy before I let the baby finish up. I was getting BP’s feed when I saw that Glory Bee had worked her halter off. Since we loosened the halter, she has periodically figured out how to wriggle out of it under certain circumstances. (Namely, when she’s tied.) The halter was just hanging around her neck. I left her there since at least she was still stuck tied to the leash. I figured I’d take her halter off when I let her go to nurse BP, and I went back to finishing setting up her feed. I turned around and just about fell over when lo and behold THERE WAS BP looking at me over the fence of the goat pen. I mean, why wait for That Woman to come open the gate when you can just barge through the electric fence and come on over?

I pondered whether I should put her back after milking since now she knew she could get out. The wire on the electric fence on the front side of her field is a bit high and it either needs to be lowered or a second wire added to that section. Or else BP is going to make herself at home in the yard and wherever else she wants to go.

Not sure yet what to do about that, I went on and let BP into the pen to milk her. THEN. As if the morning wasn’t full enough, I had just gotten going, with about a quart of milk in the pail, when I realized there was BLOOD ON MY HANDS. I stopped milking immediately, examined BP and the milk. There was no blood in the milk. I couldn’t see any cuts on BP’s teats. I went back up the stairs to the house (the goat pen is under the porch) and washed my hands. There were no cuts on my hands so the blood had absolutely come from BP’s teats. It was very cold last night, so all I can think is that this first dive in temperature had caused a chapping problem and her teats must have been raw, so when I milked her, it caused her to bleed even though no cuts were visible. Of course, I should have gotten–intended to get–udder balm to prepare before this weather. I meant to. I didn’t. (I have udder balm NOW. I immediately placed an “order” with 52 to bring me some because, like, I’m not going down my driveway anytime soon.)

After that series of disturbing events, I went about the rest of the day expecting the sky to fall or something. (It didn’t!)

Meanwhile, BP spent the rest of the day….and the night….and in fact STILL IS in the goat pen with Glory Bee (and yes, I took her halter all the way off). 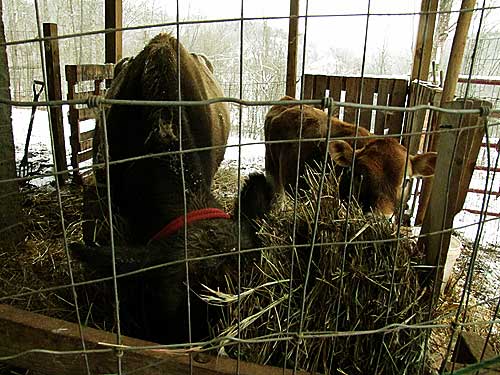 Which means I’m not getting any milk because Glory Bee doesn’t share. 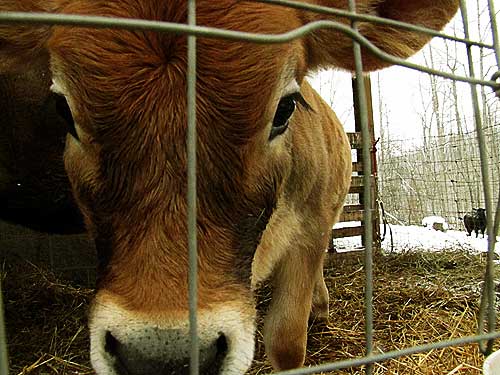 I also think that the two of them planned this entire thing as soon as I separated them again.