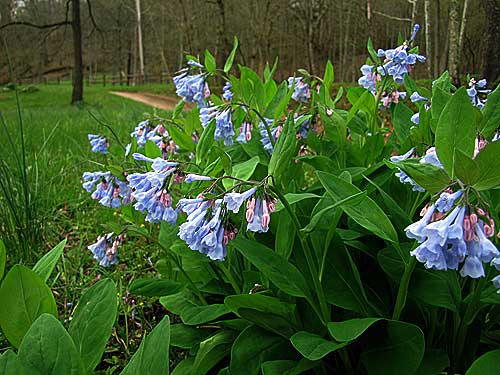 Bluebells are one of my favorite early spring wildflowers. I spotted this clump of blooms between our farm and the river ford yesterday morning when I took the kids to the bus. I meant to bring my camera with me when I went back out to pick them up in the afternoon, but unfortunately I forgot. Unfortunately not because I couldn’t take the picture–I went back later, got my camera, and photographed them–but because I didn’t have my camera with me to show you the sight that greeted us when I headed up the driveway. Poky and Jack, heading down the driveway. I was almost speechless. Ummm, ummm. I think that’s all that came out of my mouth because I knew right away that if Jack and Poky were out, that meant the goats and the cows and EVERYBODY could be out, too.

And I knew what had happened. Finally. FINALLY. Poky, who is only two years old to Jack’s 14, had said, “Jack, you’ve never taken me on a date.”

And Jack said, “My beloved, let me show you the world.” And there they went.

Jack was in the lead. He went around the side of my car and kept on going. Poky stopped in front of my car. Then she turned around, confused, and started heading back up. Thank goodness. I knew Poky was the one I had to control. I kept driving up, slowly, “pushing” Poky (without touching her) to keep going back to the house, to the goat yard. She went.

Once we got up top, I jumped out of the car, told Morgan (the donkey whisperer), “You’re on Poky! Keep her here!” Meanwhile, I ran to get feed. And take stock of what else was going on. Clover and Fanta were also out and meandering around right outside the goat yard. The gate was hanging OPEN. But that was it, nobody else out. No cows. (Whew.)

I got the feed, ran inside the goat yard and started tossing it around. Clover, Fanta, and Poky ran right in. Jack, who was too far down the driveway to know anything about feed, looked around and said, “My Poky. Where is my Poky? MY BELOVED!!!!!!” And came braying up the driveway like his life was over. And found his beloved munching feed inside the goat yard.

And they forgot all about seeing the world and had dinner.

Then we fixed the latch on the gate that they had pushed on till they pushed it down, and I went back down to take pictures of the bluebells.