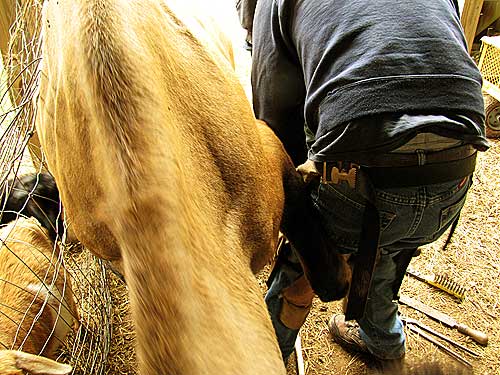 In most cases, people don’t have to trim cows’ hooves. Cows are pretty good at properly wearing down their own hooves in the normal course of their lumbering day. However, if a cow is lumbering around on ground with insufficient rock, they can end up needing their hooves trimmed. Such is the case with Beulah Petunia, who appears to either be strolling about too daintily or we don’t have enough rock to keep her hooves in shape. Today was donkey hoof trimmer day, so after he was done with Jack and Poky, I asked him to take a look at BP and give her a pedicure. He told me he’d only trimmed a cow once before and that normally cows are placed on their sides and restrained to trim. Lifting the leg to trim the hoof isn’t quite the same with a cow as with a donkey (or horse). Cows seem to have more trouble keeping their balance, plus they’re a lot heavier and more difficult to control on three legs than, say, a miniature donkey. He only successfully managed to get BP on three legs long enough to trim one hoof. He ended up trimming the others on the ground, which is not the best method, but we do what we can! 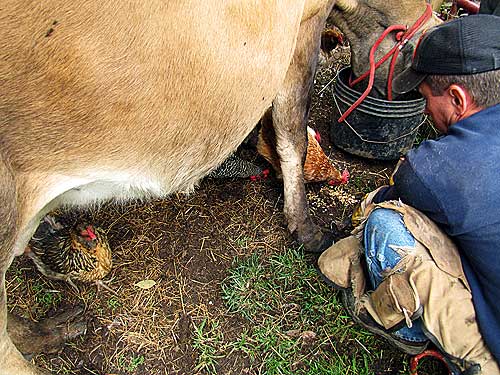 Then BP stepped on my foot and we called it a day!